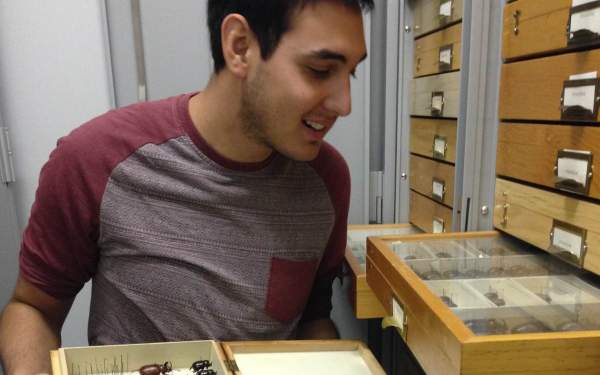 RIVERSIDE - It was an unusual Mother’s Day outing.

When Joshua Oliva took his mother out to collect insects for a UC Riverside entomology class, he knew he stumbled onto an amazing find — a firefly.

Fireflies are unusual in Southern California, but Oliva, a history major, got a huge surprise when he sought confirmation of his find with an expert on campus.

Senior museum scientists Doug Yanega took the insect find to a new level, telling the 24-year-old Oliva that his firefly belonged to a species that had not been seen before.

“This is one of the best things that has ever happened to me,” said Oliva, who collected insects as a child growing up in Guatemala.

“I felt I finally did something that mattered,” said Oliva, who was born in Burbank, spent several childhood years in Guatemala, then returned to the San Fernando Valley where he graduated from Reseda High School in 2009.

Contrary to what many believe, some 30 varieties of fireflies are in Southern California, although not all of them glow, Yanega said.

These carnivorous, nocturnal beetles occur in small numbers near springs and seeps where they are infrequently seen, Yanega said.

Fireflies are in the hills of San Diego County, in San Bernardino County’s Lytle Creek and in the Santa Monica Mountains, Yanega said.

But they only fly briefly after dusk, he said, and their range is very concentrated around areas where they can find small snails to feed on.

“No wonder people don’t realize they are out there,” Yanega said.

World authorities on fireflies at the University of Florida have confirmed Yanega’s initial conclusion that the firefly Oliva brought to him was something unseen before.

It could take several years to name the previously unknown firefly, Yanega said.

“It’s important to keep this in perspective,” Yanega said.

Researchers at UC Riverside discover a dozen new insect species every year, both local and from around the world.

“I found one on my driveway when I was living in New York,” Yanega said.

Oliva said that after using a net to sweep a bush in the Santa Monica Mountains, he saw an insect with an orange halo-like pattern on the shield covering its head.

With that telltale signature, he knew he likely found a rare Southern California firefly.

When Oliva visited his mother in North Hills on Mother’s Day, he thought it nice if they bonded on an outing.

“My mom has been asking me about what I am doing in school, so I thought I’d take her out catching insects with me,” he said.

For his “Field Entomology” class, Oliva said he needed to collect and properly present 300 museum-quality insects for a grade.

As Oliva caught the firefly at about noon, it was not blinking.

Oliva is a few units short of completing his undergraduate degree as a history major focused on Latin America.

But he plans to attend graduate school for a master’s in entomology.

“Discovering a new insect sure looks good on the application,” he said.