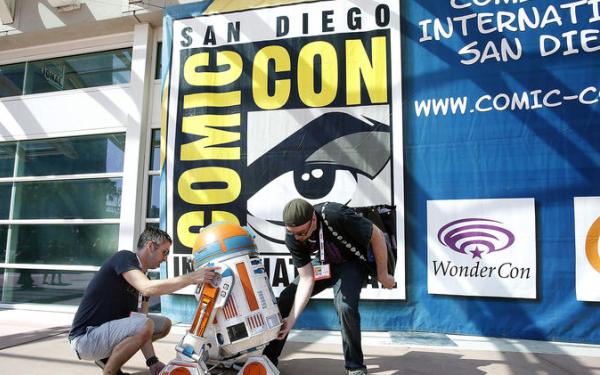 Cory Pacione, left, and Nick Murray with their model of R2-D2 at the 2013 Comic-Con at the San Diego Convention Center.
(Credit: Kirk McKoy / Los Angeles Times)

Comic-Con International has just revealed its programming schedule for July 8 and 9, and "The Hunger Games: Mockingjay -- Part 2" and "Doctor Who" are among the highlights at the San Diego Convention Center.

July 8 is Comic-Con's preview night and the highlight is of course the sneak peek screenings of TV pilots starting at 6 p.m. in Ballroom 20. Fans can catch an early look at the pilots for "Supergirl," "Blindspot," "Containment," "Lucifer" and "Teen Titans Go!"

The full slate of programming begins the following day.

Fans can get an exclusive first look at the final installment of "The Hunger Games" films at the panel starting at noon in Hall H. The panel will include never-before-seen footage of the film as well as a Q&A session with the cast and filmmaker.

On the television side of things, BBC's official "Doctor Who" panel will feature the Comic-Con debut of Peter Capaldi, who plays the 12th Doctor. The panel will include actresses Jenna Coleman (Clara Oswald) and Michelle Gomez (Missy) as well as lead writer and executive producer Steven Moffat and executive producer Brian Minchin. The panel starts at 2:15 p.m. in Hall H.

Alan Tudyk's "Con-Man" will have its meta-moment with a panel that will also be at Hall H. Joining Tudyk to talk about the crowd-funded series will be Nathan Fillion, P.J. Haarsma and Mindy Sterling. The "Con-Man" panel is scheduled to start at 3:45 p.m.

Other television highlights include CBS TV Studios' presentation that involves exclusive looks and discussions with the cast and crew of "Extant," "Zoo," "Under the Dome," "Limitless" and "Scorpion." It begins at noon in Ballroom 20.

Of course, it wouldn't be Comic-Con without a screening of "Dr. Horrible's Sing-Along Blog." This year the screening is set for 8:30 p.m. in Room 6BCF. (However, we wouldn't blame you if you choose to attend the "Spirited Away" screening at 9 p.m. at the Horton Grand Theater instead).

San Diego Comic-Con will be held from July 9-12.