CDC: More than 1 in 8 Americans infected with HIV don't know it 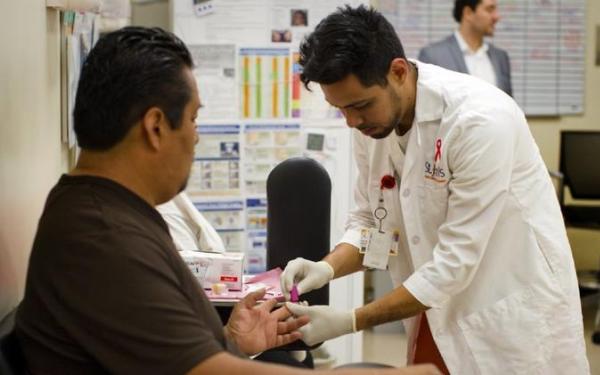 A man gets an HIV test at a Los Angeles clinic. A new report from the CDC estimates that 13% of Americans who are HIV-postiive don't know they are infected.
(Credit: Gina Ferazzi / Los Angeles Times)

More than 1.2 million Americans are living with HIV – including about 156,300 who don’t realize it, according to a new report from the Centers for Disease Control and Prevention.

That means 13% of those who are infected with the virus that causes AIDS aren’t in a position to protect their health, or the health of others.

The White House has set a goal of making sure at least 90% of people infected with HIV are aware of their status. As of 2012, only four states – Connecticut, Delaware, Hawaii and New York – had certainly met that goal, researchers reported Thursday in the CDC’s Morbidity and Mortality Weekly Report. Colorado came very close, with an estimated 89.7% of its HIV-positive population having received a diagnosis.

Another seven states – Alaska, Idaho, Maine, Montana, New Hampshire, North Dakota and Vermont – may well be meeting the 90% target set in the National HIV/AIDS Strategy, the researchers said. However, these seven states did not have enough new cases of HIV in recent years to allow for a statistically reliable estimate.

Nationwide, about 87% of Americans with HIV know they are infected, according to the report. That figure is based on data from the 41 states (plus the District of Columbia) where at least 60 people were diagnosed with HIV each year between 2008 and 2012, on average.

The state with the lowest rate of HIV-infection awareness was Louisiana, where only 77% of those with the virus knew that they had it.

It stands to reason that people who are infected with the human immunodeficiency virus would benefit from knowing it. An international clinical trial recently showed that starting antiretroviral treatment right away instead of waiting for the immune system to deteriorate can reduce the risk of death or serious illness by 53%. The results of the Strategic Timing of AntiRetroviral Treatment, or START, trial were so convincing that the study was stopped early so that all participants could receive the drugs.

Knowing one’s HIV status is also good for the public at large, since people who have HIV but don’t realize it are in a prime position to spread it to others. A study published this spring in JAMA Internal Medicine found that about 30% of new HIV transmissions could be traced to people who were infected but undiagnosed.

To figure out how many people in the U.S. were unaware of their HIV-positive status, researchers turned to data from the National HIV Surveillance System. By looking at the number of people diagnosed with HIV or AIDS, as well as how sick patients were when they were diagnosed, the researchers could make a “back-calculation” to estimate the true number of new HIV cases in each state each year, the study explained.

After adding up the annual figures and subtracting out deaths due to HIV/AIDS, the team could calculate the overall prevalence of HIV in each state in 2012. With those numbers in hand, they used state data on diagnosed infections to find the proportion of all HIV-positive people over the age of 12 who were undiagnosed.

The team also made estimates for men who have sex with men, a group that accounts for about 60% of new HIV cases per year. Thirty-eight states plus the District of Columbia had enough new cases to allow the researchers to make a reliable guess.

Among them, only Hawaii met the 90% threshold, though New York came very close at 89.9%, according to the report. Across all 39 jurisdictions, an average of 85.2% of HIV-positive men who have sex with men knew of their status, the researchers found.

Alaska, Maine, Montana and Vermont appear to be meeting the 90% target, but they aren’t among the 38 states with enough new HIV diagnoses to say with certainty.