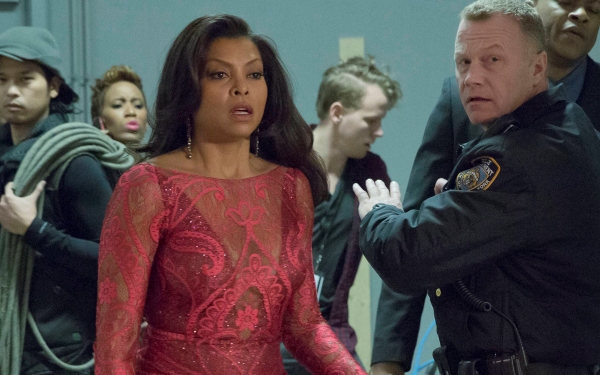 Cookie (Taraji P. Henson) gets some news in the special two-hour season finale of "Empire," which aired March 18 on FOX.
(Credit: Chuck Hodes/FOX/TNS)

Remember when you got scolded for watching more than an hour of TV at a time? Or when bingeing was followed by a hangover? Those days are long gone, as these actors made clear in a recent conversation.

Below are edited excerpts from a recent conversation.

So, what do you find fascinating about the current state of TV?

Taraji Henson: And social media because that’s where I find a lot of shows. You know, I’d heard of “House of Cards,” of course, but then when I saw people talking about it on my timeline it made me go, “Whoa, what’s this?” and then I watched it and I was hooked.

Did you binge watch?

Henson: I did. That’s actually the only way I can watch television because I never have time to sit down and catch an episode of anything. So it’s a great way to catch up and not have to wait through the agony of, “What’s going to happen next?” You can just watch the entire series in one sitting with a bottle of wine.

Michael Sheen: But we start to lose our ability to put off short-term gratification. The idea of waiting another week to watch a show, I’ve always hated that, but maybe it’s good to hate that. Now you can just plow through. I mean, I love it. I’m the same as you, I just want to keep going with something but I wonder what that’s doing to us internally now.

Knowing people are sometimes watching five or six episodes — and sometimes they’re watching on a phone — do you feel like you need to be more subtle with some of your choices?

Felicity Huffman: I try and do very tiny, tiny gestures because if I’m on a tiny phone…

Sissy Spacek: I never even thought of that.

Spacek: Or actually when you know people are going to watch it on their phones you do everything real big.

Sheen: One of the things I find — in the same ways cinema in the ‘70s in America got to a point where the people who were in charge were like, “We don’t really know what works. Things are really working well and we can’t anticipate it so, OK, go and do that.” It feels a little bit like that with TV where you’ve got people like Louie CK, for instance, supposedly making a comedy that’s not a comedy a lot of the time and people really react to it. And different shows with different formats like “True Detective” or “Fargo” where it’s a one-off season. Everything’s being shaken up and no one can really anticipate what’s going to take off and what’s not.

It’s a very responsive medium. Taraji, you came from “Person of Interest” and people were sort of up in arms about the death of Carter. Were you hesitant about jumping back into a show?

Henson: I didn’t want to do television anymore. I felt trapped on TV.

Henson: TV’s a different animal, you know, when you come from a feature world where you have — you take one day to do two scenes, you know? In television they’re like 10 pages. It’s like, “Wait a minute!” It’s all coming at you so fast and it’s like, “We’ve got it,” and you’re like, “Wait a minute! I didn’t — can I explore that beat a little more?” So it was just odd but I’m glad I did it. And particularly a show like “Person of Interest” because it’s a special rhythm, you have to say the words exactly the way they’re written on the page and so it keeps you in a certain rhythm. It kind of throws you off but in a good way because it’s a challenge.

I enjoyed that we shook television up a bit because people weren’t expecting that and I think sometimes TV can be a bit safe, don’t you think? Like the good guy saves the day and the bad guy goes to jail. Well, life is messy. It doesn’t happen that way in real life and sometimes the good guy gets it, and I think that’s why people still mourn her death because they just never saw it coming.

Sheen: But shows like “Sopranos” shook that up, didn’t they?

Henson: Oh yeah, absolutely. But that’s HBO. I’m talking about primetime network television where always the good guy saves the day and the bad guy goes to jail. That’s so not life.

Let’s talk about making the leap then to something like “Empire,” which really shook things up.

Henson: Yeah, I didn’t read that script for weeks. I was doing a play at the Pasadena Playhouse. I was done with television. And my manager was like, “Hey, this is — “ I said, “Didn’t I tell you I didn’t want to do television?” So then I actually sit down and I read it and I was like, “Hip-hop, this is stupid. This is going to be — oh my god.” And it scared the life out of me. But, you know, I like taking risks and that was a definite risk that worked, you know? That’s what art is about. It shouldn’t be safe.

Cumming: I love that it doesn’t tell the audience what to think and a lot of television in the past, until this kind of renaissance that we’re all a part of now, told people what to think. And now you’re challenged and you have to make up your own mind — and sometimes people you hate suddenly are sympathetic and sometimes the lady that you think is the good wife, suddenly is doing things, and you’re like, “What the hell is going on here?” So it’s more exciting as a performer to be in something that is not just corresponding to kind of old patriarchal ideas of what it should be like.

Felicity, how was it getting into that mind frame where Barb has these sort of bigot kind of beliefs but she’s not a hard and fast sort of bigot?

Huffman: I think she’s a racist, not a bigot. You always have to find something that you endorse, so no, I didn’t play her like a racist. I played her like a mother who’s trying to take care of her son, which indeed she is. So I say her motives are noble but how it manifests is somewhat questionable, so I tried to hew to that line so it looked like she was driven towards something, as opposed to just being unpleasant.

Michael, do you sort of relate to that given Mr. Masters?

Sheen: Yeah, I sort of perversely decided that I was going to try and play the most unlikeable character on TV and see if people could still empathize. And that was part of what was exciting about the project and also the fact that he’s not just the main character. There’s two main characters that kind of balance it out.

But they had wanted to make him a little bit warmer, right, and you pushed against it.

Sheen: I resisted it every step of the way. I thought the nature of the episodic way of telling the story allowed for a greater complexity and I wanted to see how far I could go with that and whether an audience would go with it. And given that the character is a real person and when I was reading about his real life, you come across the fact that he used to have the ... beaten out of him by his father randomly, so you kind of go, “If we’re going to tell a story about a man who is a difficult man, and there are very real reasons for why he’s a difficult man, then I really want to go on that journey. And that’s been hard because people then come up to you and go, “He’s such an ass, your character.” You don’t want to get into, like, “Yeah, well actually he’s been abused. Do you say that about everyone who’s been abused?”

Sissy, you’ve been on TV shows before but “Bloodline” was the first time you were there from the beginning. How was that for you?

Spacek: I call it the year of not knowing. It was an interesting experience not knowing where the character was going.

Spacek: You know, you couldn’t play the result. That was one good thing. I remember when I finally saw it I thought, “Oh! That’s what it’s about.”

Spacek: It was a completely new experience for me. I loved it. I think one of the things I loved the most was developing these deep relationships with the other actors. I’d never experienced that before and I loved that. And I look forward to next year thinking, “OK, now I kind of understand sort of what’s happening.” But I find this (conversation) very interesting, I’m thinking, “OK, let me make a note of that.” I can use these things.

You mentioned family, a lot of these shows deal with the family bond and that’s a crucial element for a lot of these characters too. How do you develop that bond so it feels like you’ve known these people all your lives?

Spacek: I started touching a lot —

Spacek: I looked around at this room full of adults, thinking, “I gave birth to all of these people. I need to touch them.”

And there’s a lot of turmoil and conflict within Barb’s family. How was it getting there?

Huffman: I had to actually really concentrate on that one and I didn’t end up talking to anyone. And the (director of photography) thought Timothy Hutton and I hated each other because he never actually saw us talking. And, well, that wasn’t exactly Method, it was just I had to concentrate that hard, so I couldn’t go from chatty-chatty to the scenes. So it was a lonely experience.