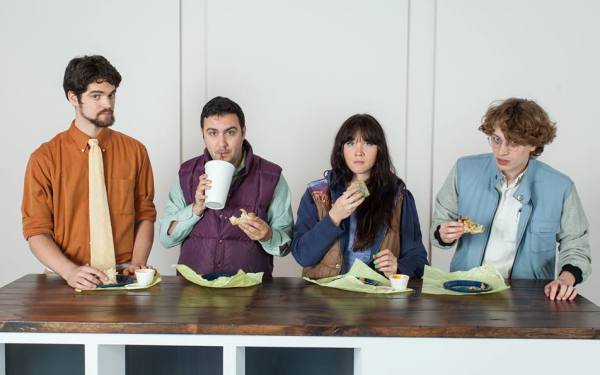 When you’re daydreaming about summertime, with all of its beaches, pools, and agreeable mischief, you most likely have some soundtrack subconsciously playing in the background. If you’re doing it right, it’s something fun; it’s something infectiously groovy; and above all, it’s unique. That’s where Sun Bones comes in.

Hailing from the relentlessly sunny town of Tucson, Arizona, it’s really no surprise how this foursome that comprises Sun Bones inhaled the bright spirit that is their sound. When they released their first album Sentinel Peak back in 2013, we learned that they had twisted something familiar into an absorbing wave of new aural pleasantries. With each turn of the track, the indie rock group proves to be unpredictable, throwing a wrench in any preconceived notions before they can even manifest.

And now with the release of their latest self-titled LP Sun Bones, we are graced with more of the same—that is to say more of the same unpredictably delightful tracks that bounce rather than flow into one another. It’s almost impossible to not compare lead singer Sam Golden’s voice to that of Grizzly Bear’s Daniel Rossen, but that doesn’t mean he doesn’t rock it in his own way. Using the same spirit of riffing the guitar out of tune just right, and using precise yet soaring harmonies with his fellow members Seth Vietti (drums), Bob Hanshaw (bass), and Laura Kepner-Adney (guitar), you can tell these guys have that classical musical education under their belt that they simply love to use and then abuse.

Take the second track “Pet” off of Sun Bones. It reveals layers of asymmetrical beats that break down the melodious flow of their paired vocals. From there, they seem to use that general model and apply it to various genres of influence. For example, “Moon Street” embraces a kind of jam band vibe with its lazy percussions and bass, whereas “It’s You” exudes a more vibrant pop vibe, very much along the lines of Vampire Weekend. Even with the rather dire lyrics of “You’re Gonna Die,” the buoyant spirit is so darn irresistible it makes you want to celebrate with wicked dance moves.

And luckily for all of us ready to groove, these Arizonians are leaving their homeland and travelling across the country to celebrate summer in proper fashion. Make sure to check out their website for tour dates and catch them at a city near you if you know what’s good for your summery soul.

Sun Bones will be hitting LA on July 8th at The Mint. Get tickets here.