Batkid: For those involved in making boy’s dream come true, the end result is pure joy 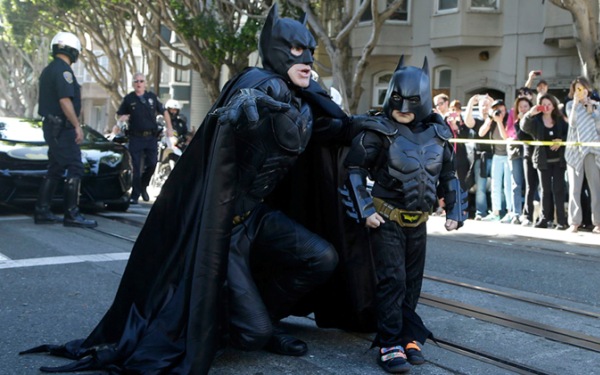 Still from Batkid, a documentary about the day San Francisco came together for Miles Scott, and how his Make-A-Wish event became a social phenomenon.
(Credit: Handout)

It was the day for a dream to come true: On Nov. 15, 2013, with more than 20,000 coming out to support him and more than 1 billion cheering online, 5-year-old leukemia survivor and Batman fan Miles Scott hit the streets of San Francisco as Batkid.

Even President Barack Obama took notice, telling the little boy in a video: “Way to go, Miles, way to save Gotham.”

The new documentary “Batkid Begins” chronicles how Miles’ Make-A-Wish event became a social media phenomenon. The film features interviews with organizers of the day as well as footage shot by the family, news crews and the production company that Make-A-Wish hired to document Miles’ adventures. The film premiered at Slamdance in Park City, Utah, in January and has made the rounds of festivals.

Director and producer Dana Nachman said the movie ultimately is not so much about Miles as it is about the volunteers who made the day. Make-A-Wish Greater Bay Area fulfills 350 to 390 wishes for young people diagnosed with a life-threatening diseases each year. Patricia Wilson, chief executive of Make-A-Wish Greater Bay Area, said about 80 percent of the children go on to beat their disease and survive.

The children’s wishes fall into five main categories: I wish to go (the biggest category), I wish to have, I wish to meet, I wish to help and I wish to be (“the most creative and complicated,” Wilson said).

Miles’ wish to be Batman turned out to be the most complicated wish that Wilson, her staff and her volunteers had ever experienced.

“All of those volunteers gave up their time to say, ‘I want to make it better for this one child,’ and the ripple effect is extraordinary,” Wilson said. “The film captures that in such a beautiful way. In short of giving birth to my two children, this is the most profound experience of my life.”

Miles, who has been in remission and just finished first grade, lives with his parents and younger brother on a farm in Tulelake, Calif., near the Oregon border. His father, Nick, is a farmer and volunteer fireman. His mother, Natalie, is a nurse. The sweetly shy Miles fell in love with the 1960s “Batman” TV series while recovering from tests and chemotherapy treatments for lymphoblastic leukemia that was diagnosed when he was 18 months old.

When the family learned that Miles qualified for Make-A-Wish, Miles knew exactly what he wanted.

Wilson worked on the various scenarios for the day and came up with three capers involving the Riddler and the Penguin, helping a woman in distress and rescuing the San Francisco Giant’s mascot, Lou Seal. San Francisco Police Chief Greg Suhr issued the plea for Batman’s help, and at the end of the day Miles got the key to the city from Mayor Ed Lee.

Wilson also got help from inventor and acrobat Eric “EJ” Johnston, who has worked with Make-A-Wish for a decade. Because Miles is so shy, Wilson came up with the idea of having Johnston play Batman with Miles as his mini-me Batkid. Johnston’s wife, Sue Graham Johnston, was cast as the damsel in distress whom the dynamic duo were to rescue from a cable car track.

“The woman who did the flash mob is my cousin,” Wilson said. “The guy who played the Riddler is one of our other staff member’s cousin.”

Mike Jutan, a creature animation engineer at Industrial Light & Magic and Johnston’s friend, was invited to play the Penguin. (Jutan later would be credited for helping the social media explosion by posting about the volunteer opportunity on Facebook and Twitter.)

“Our goal was always that Miles have an amazing time and that we fulfilled his wish of becoming the real Batman,” Jutan said. “The goal was never to please the crowds. There was this feeling to do a good job because people are watching and to say something very, very strong about volunteering in your community.”

Ironically, director Nachman, who is based near San Jose, missed the Batkid event.

“I was editing that week and I wasn’t on social media for whatever reason,” she said. “I heard about it the next day.”

After checking out the event on the Internet, Nachman realized the potential for a film. She developed the idea of a documentary with a journalist friend, Liza Meak, who is a producer on the film. The two then met with Make-A-Wish.

Nachman said she and her whole crew are donating their proceeds to the BatKid Fund charity created by the Scotts to support other charities.

“There was no one on this project who sought the limelight,” Wilson said. “I think that everyone did it out of love for Miles, not for any notoriety. That is what makes it so pure.”