Stung: when bugs fight back 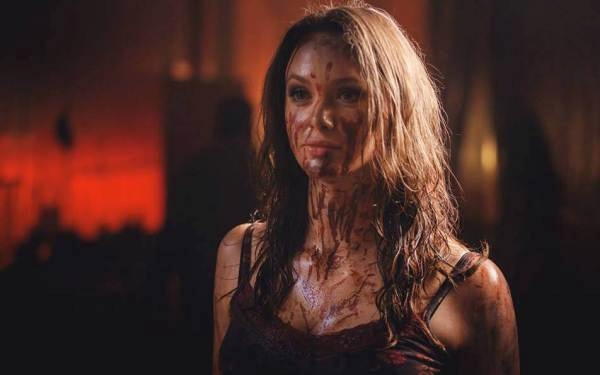 Insects. Creepy crawlers. Creepy Fliers. Whatever you want to call them, or whatever shape they may come in, bugs are, for a vast majority, pretty gross and are often treated as such. Smashing them to pulp seems an appropriate and immediate response when they come within a sniff’s distance of you, giving you a brief sense of satisfaction that you have power over something so much smaller than yourself. But, what if bugs weren’t smaller than you? What if they were, in fact, much larger than you and could very easily and willingly smash you into a pulp?

These are the whimsical queries of young first-time screenwriter Adam Aresty, who dreamt of a world where wasps are no longer the size of a peanut, but rather the size of a horse, and who, rather upsettingly, have a knack for tearing apart human flesh from the inside out. The result is a monster-movie that we’ve kinda seen before, but never with this genus on the killing spree, and it’s called Stung.

Directed by another newcomer, Benni Diez, Stung takes place at a mansion in the remote countryside of doesn’t-really-matter-where. Paul (Matt O’Leary) and Julia (Jessica Cook) are two teenagers (?) who work as caterers for a stuffy garden party of the pharmaceutical-tycoon hosts, and while Julia tries to stay professional despite the leering boredom, Paul hopes to spice things up with a little bit of green therapy and attempts at winning some of Julia’s affection. That all, of course, is thrown to the wayside when wasps the size of grapefruits pop out of the ground and start stinging the unaware snobs. Instead of the usual remedy of ice and a Band-Aid, the wrath of these bee stings proves to be much greater, as the victims are shortly torn form the inside out as new, human-sized wasps emerge.

What happens next you can probably guess. These winged creatures go on a grotesquely murderous rampage that is often silly, often absurd, and often a raucously good time as Paul, Julia, and their few fellow survivors—the rather entertaining alcoholic mayor (Lance Henriksen) and the overtly sketchy son of the estate Sydney (Clifton Collins Jr.)—attempt to escape the wasps’ nest that was once the mansion.

Like its characters, Stung often falls into traps, and in this case, traps of the horror narrative itself. The problem with genre films, especially a very niche genre of a genre film, is the plot templates that many of these types of movies to be, well, generic, and unfortunately, Stung suffers from many maladies.

First is its female lead, Jessica Cook (Awkward), who proves to be a good face for the camera, as well as an understandable object of affection for Paul, but who truly lacks in execution and engagement. She does manage to give momentum to her character as the ante is upped, but she still somehow succeeds in falling into the background—a gruesome, and carnage-filled background, yes, but the background nonetheless.

Another huge fault lies in the origin story of the genetically mutated wasps. Sydney, the humpback momma’s boy of the pharmaceutical family, alludes way too quickly and flippantly to the cause of the outbreak, and even then I’m pretty certain it made zero sense. Not that giant wasps really need to make sense, but who wouldn’t be more curious about where the hell they came from?

Luckily, Stung does have a few saving graces that allow the downfalls become somewhat muted. Matt O’Leary (Brick) as the girl crazy, stoner-turned hero brings enough playful kitsch to show how seriously unserious this movie is. Yeah, he’s scared, and he’s good at being scared, but still he manages to poke fun at Paul and the story’s faults.

And of course we have to consider the monsters themselves. When it comes to low-budget horror movies, often a lot of the thrill is lost on cheap effects. Diez, however, who is known for his special effect work in Lars von Trier’s Melancholia, knew exactly how to create a tangible image of giant man-eating wasps expertly utilizing both practical and visual effects. You might even say that the effect work was too good for the campiness of the script, somewhat throwing off the tone, but in this case, Diez’ work is admirable.

So, while it may not be the most memorable piece of horror that the genre has churned out, especially considering ones that involve insects, if you can make a wasp the size of Andre the Giant look plausible, then maybe that’s reason enough to give Stung a chance.

Opens at Arena Cinema in L.A. and VOD July 3rd!