Can D'Angelo Russell bring 'Showtime' back to the Lakers? 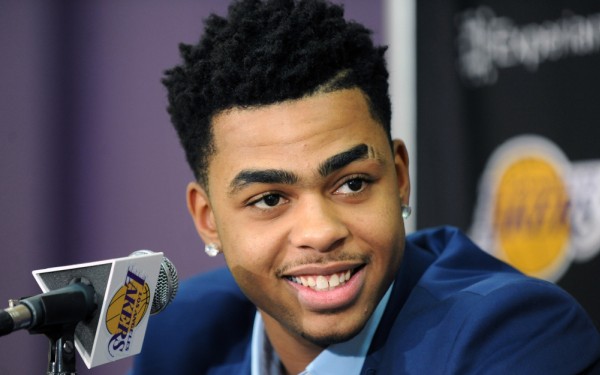 Scott saw visions of his former Showtime teammate Magic Johnson as Russell organized the offense and set up teammates in a series of three-on-three scrimmages. The workout partly prompted the Lakers to select Russell No. 2 overall in the 2015 NBA Draft last week over Duke center Jahlil Okafor. But perhaps mindful that he has yet to play an actual NBA game, Russell deflected his coach’s praise about as quickly as Johnson once threw no-look passes.

“I’m not the basketball player he is,” Russell said on Monday at his introductory press conference at the Lakers’ practice facility in El Segundo. “That’s something I’m working to become. But, for him to say that, I know that he sees the potential.”

Russell sounded mindful of what he needs to do to match Scott’s expectation.

“I can’t get too high off that,” Russell said. “I’ve always been a guy that was overlooked, so I just have to respect my work ethic and where I came from to get to this point. So, my edge on my shoulder is bigger. I’m still only 19, so there’s a lot for me to learn and a lot for me to experience.”

Johnson experienced his first of five NBA championships when he won Rookie of the Year honors. He soon became one of eight Lakers to have their jerseys retired. It seems far too presumptuous to know whether Russell can follow that same path.

The Lakers are only one year removed from finishing with their worst record in franchise history. They also plan to become aggressive participants in the free agent market starting tonight to revamp the roster. The Lakers will meet with Portland center LaMarcus Aldridge at 9:01 p.m. PST tonight and with Clippers center DeAndre Jordan on Wednesday, according to a league source familiar with the situation. The Lakers also declined a $9 million team opton to retain Jordan Hill, which will give the team $23 million in cap room.

So even if he earned Big 10 Freshman of the Year honors for averaging 19.3 points and five assists with Ohio State, Russell downplayed whether he will immediately produce a compelling sequel to “Showtime.”

“I really want to be known for working hard and then let ‘Showtime’ come along,” Russell said. “When we can win games and start to get that involved, that’s when it will start being fun.”

Russell looked like he was having fun on Monday as he wore his No. 1 Lakers jersey along with the team’s draft picks at No. 27 (Wyoming senior power forward Larry Nance Jr.) and No. 34 (Stanford senior small forward ). He recalled how he felt “extremely shocked” on how quickly the telecast of the NBA draft captured his elated reaction to the Lakers selecting him.

But he also seemed aware of the adjustments he may need to make with the Lakers in a backcourt that features both Kobe Bryant and Jordan Clarkson.

In a conversation with Bryant on Sunday, Russell described himself as “a sponge” and revealed he wanted to learn “everything” next season in what will mark Bryant’s 20th and possibly last NBA year. Russell also called Clarkson “explosive” and “versatile” after he made the NBA’s All-Rookie first team for averaging 15.8 points on 45.8 percent shooting, five assists and 4.2 rebounds in 32.1 minutes through 38 games as a starter.

Russell and Bryant will likely start in the backcourt, while Clarkson comes off the bench. All three will likely share ball handling duties.

“I can adjust to whatever situation, if it’s being playing off the ball, on the ball, if it’s me creating for guys and that being my only role, I’m up for the challenge,” Russell said. “I notice guys stick around in this league for having multiple things that they do well.”

Johnson once did that to perfection, something the Lakers hope and believe Russell can eventually perform.