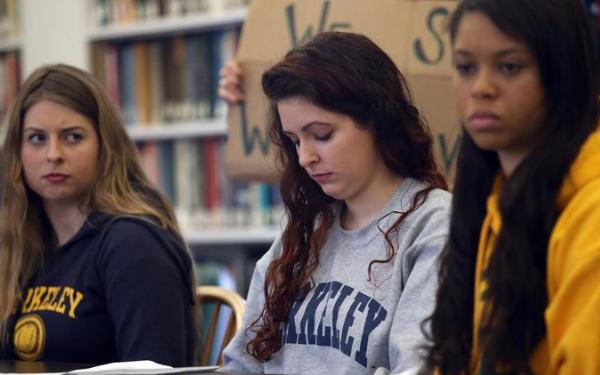 Three current and former UC Berkeley students sued the University of California on Monday for allegedly failing to properly respond to their sexual assault complaints, asserting that administrators did not act quickly enough or adequately penalize perpetrators found responsible.

"They absolutely failed to respond to these charges in any manner that could be considered adequate," said Irwin M. Zalkin, an attorney for the plaintiffs. "There was deliberate and utter indifference to these girls."

In a statement, UC Berkeley spokeswoman Janet Gilmore said officials would reserve comment on the lawsuit until they reviewed it. But she said a state audit found that Berkeley's handling of sexual assault and harassment cases in 2013-14 were "reasonable and that sanctions were appropriate given the severity of the incidents."

The campus has also "made great strides" in beefing up efforts against sexual assault, Gilmore said. In the last year, Berkeley officials have barred students from enrolling until they take training courses in alcohol and sexual assault awareness; hired a confidential advocate to provide emotional support and help to students navigating the reporting process, increased investigators, strengthened complainant's rights and created a support website, among other actions.

The efforts reflect a broader campaign by University of California officials, who unveiled a systemwide plan last year to combat sexual misconduct amid heightened pressure from the White House and federal authorities to do so. In the last three years, the U.S. Department of Education has launched more investigations, released more guidelines, received more complaints and issued more fines against universities for faulty reporting of sexual misconduct and harassment than ever before.

The education department is investigating Berkeley, UCLA, USC and several other private and public campuses after students filed complaints with the department alleging the schools mishandled their cases. Among them, 31 current and former Berkeley students filed two complaints against the university last year alleging that officials for years have discouraged victims from reporting assaults, failed to inform them of their rights and led a biased judicial process that favored assailants' rights over those of victims.

The three Berkeley plaintiffs in the new lawsuit were among those who filed federal complaints last year. They are:

--Sofie Karasek, 22, a senior, who alleged that she was fondled by a fellow student while she slept during a trip to San Diego with the UC Berkeley Democrats Club during her freshman year in 2012. She said university officials failed to properly inform her about the complaint process and keep her updated on the investigation, nor did they allow her to participate in a disciplinary hearing.

--Aryle Butler, 21 a May graduate, accused a guest lecturer with repeatedly touching her inappropriately while she participated in the Alaska Wildlands Studies Program in the summer of 2012. In the lawsuit, she said she reported the alleged assaults to university officials but was admonished about the consequences of false reports and that no action appears to have been taken against the lecturer.

--Nicoletta Commins, 23, a graduate student, reported to Berkeley police that a fellow student sexually assaulted her in her apartment in January 2012. The student was convicted of felony assault, Zalkin said, and the university suspended him for more than two years but plans to allow him to return to campus; Commins believes he should have been expelled. Like the others, she also said university officials did not give her adequate information about the process or investigation.

Zalkin said that UC Berkeley's recent actions to improve its handling of sexual misconduct cases were still not good enough. He said the 2014 state audit of Berkeley and three other California campuses found a lack of staff training, education and updates to students who file complaints. He also said his clients continue to receive calls from sexual assault victims unhappy with the university's processes.

"Maybe a civil lawsuit will be a way to sensitize [UC officials] to implement better policies," he said.