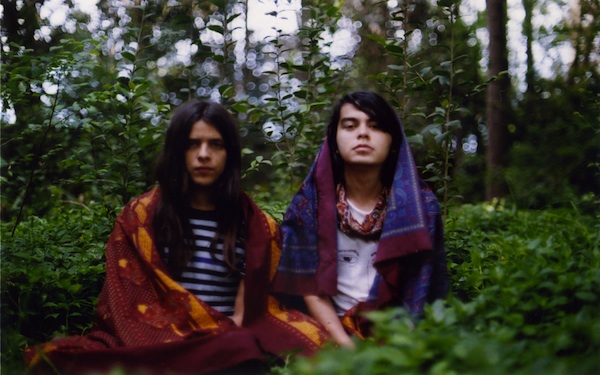 In this first installment of the new weekly series where we showcase bands from across the seas that ought to be heard stateside, we come with a handful of woefully talented foreigners, most of whom come from the psychedelic rock persuasion. Some are brand spanking new, while others have been jamming for a good bit now, but all are proving with their latest albums that they are worth your attention. Spanning from Europe, all the way over to China, and then down to South America for a double dose of good vibes, we’ve got some quality cultural exchanges going on, and want you to be a part of it. Onward, aural traveler!

When Helen Feng returned from Los Angeles to her native Beijing, she was ready to turn the Chinese music scene on its head. So, when she started her band Nova Heart in 2012, quickly acquiring the nickname “Queen of Beijing Rock,” it looks like she did just that and then some. In their upcoming self-titled debut album, Feng’s hazy, surreal, psych-pop melodies are enough to put you in a dreamy sense of wonder, while her laidback bass and synth keep your hips and toes happily swaying and tapping. Feng and her bandmates promote a refreshing take on the offbeat, one that is admirably accessible and that will hopefully pave the way for other independent Chinese musicians looking to tap into international markets.

There may not be an album more suited to the wild whims of summer than Amanecer, the fourth studio album from Colombia’s infectiously upbeat electronic group Bomba Estéreo. Whether you find yourself in a club, on the beach, or in your car with windows rolled waaaaay down, each track infused with Colombian flare begs the listener to abandon all sense of limitation. It’s no surprise that Amanecer reached the top of the Latin iTunes charts shortly after its release earlier this month, because, simply put, Bomba Estéreo has found a sound that is hopelessly intoxicating.

Take a look at their wildly energetic video for "Fiesta" and don't forget to check out their upcoming US Tour dates.

There’s something about the shameless sensitivity of Jaakko Eino Kalevi’s voice mixed with his funky and vibrant instrumentals that bring to mind the best of the 80's music scene as if it were thrown into space. Imagine David Byrne orbiting around the moon, having a cup of tea with some aliens, and maybe Kalevi is what you’d get once the conversation got back to earth. With his latest self-titled LP, this Finnish lad has created a uniquely familiar world that ought to attract eccentric as well as more orthodox listeners looking to gain some middle ground.

Jaakko is heading on his US tour this summer, hitting LA on July 29th at The Echo. Oh, and you should probably watch Jaakko's video for "Deeper Shadows".

More greatness comes out of South America, this time from the vibrant city of Santiago, Chile. Ives Sepúlveda and Manuel Parra are the duo that makes up The Holydrug Couple, a surprisingly mature psych-funk band that easily sweeps you in the moment that first synth chimes in. Their latest LP Moonlust is rife with sweet, dreamy sounds that make you want to live in breezy slow motion. Largely inspired by 70s French movie soundtracks, these two young men have tapped into a style that is simultaneously nostalgic and futuristic, and ought to easily cater to international audiences, especially those who are fans of fellow psych-rockers Air and Washed Out.

Check out The Holydrug Couple’s latest video for "Dreamy" as well as their international tour dates.