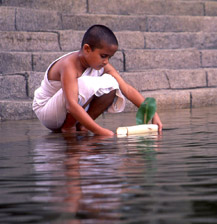 The much talked-about film Water, from director Deepa Mehta, will open the 4th annual Indian Film Festival of Los Angeles on Wednesday evening, April 19 at 7:30 p.m. In the film, which takes place in 1938 colonial India and stars Seema Biswas (Bandit Queen) and Lisa Ray (Bollywood/Hollywood), a girl named Chuyia is widowed and sent to a home where Hindu widows live a life of renunciation.

While there – in a film which clearly explores the religious implications of India’s so-called “widow houses” and follows three widows who stand up for themselves during Gandhi’s period of liberation – Chuyia’s feisty presence affects the lives of everyone around her.

Water is one of many films scheduled to screen at the Indian Film Festival, which was developed four years ago to expose viewers to films about India, as well as to promote Indian filmmakers to mainstream audiences. The Festival screens a plethora of films over its five-day run, and also hosts a handful of galas, workshops and other insightful programs.

Films being screened at this year’s fest include: Men of Burden, Bombay Calling, The Churning, Waiting, Monsoon Wedding and Mixed Doubles, a film by Rajat Kapoor about a complacent middle-aged married couple, which closes the fest with a special gala on Sunday evening, April 23. ArcLight Cinemas is located at 6360 W. Sunset Blvd. (between Vine and Ivar, with DeLongpre to the south), in Los Angeles. Parking is available in the garage adjacent to the theatres. For more information or to purchase tickets, visit www.arclightcinemas.com.For more information about the festival, visit www.indianfilmfestival.org.