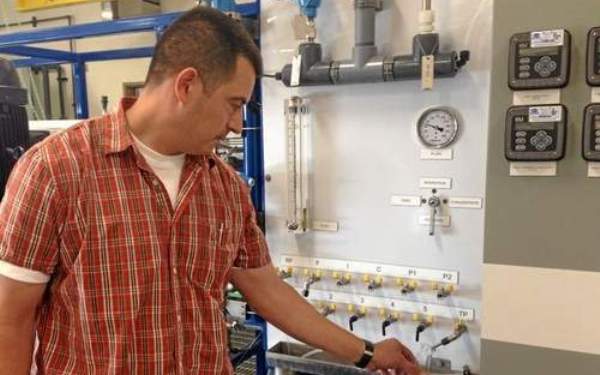 POMONA - Cal Poly Pomona, with its agricultural programs and iconic Arabian horses, uses more water than any other Cal State University, according to officials. But in the midst of a historic statewide drought, Cal Poly Pomona officials are working to cut back on water usage, in response to the 25 percent water usage cut ordered by Gov. Jerry Brown.

About two-thirds of Cal Poly Pomona’s water usage is for the school’s agricultural programs, according to spokeswoman Emily Velasco. But two-thirds of that isn’t the same water as comes out of most bathroom faucets, but is instead “reclaimed” water that has already been used by humans and has been artificially filtered before reuse.

The university is also spending $100,000 to improve the irrigation systems used by the school’s agricultural programs, which already use hydroponic irrigation and other water-conserving technologies in various locations.

New buildings are also being built with water-conserving plumbing, including low-flow toilets, and older buildings are being converted as money becomes available to do so.

New buildings and parking lots are getting drought-tolerant landscaping. All irrigation has been cut back by a quarter, in accordance with Gov. Brown’s mandate.

But Cal Poly Pomona’s biggest initiative is a new $3.3 million reverse osmosis water treatment plant that, when it goes fully online in August or September, will allow the university to get all of its water needs from well water and only use Metropolitan Water District of Southern California water as a backup.

The university will be drawing from the same aquifer as the cities of Pomona and Walnut.

Still, the university won’t be stopping there, he said.

“If we can save more than 25 percent, we’ll do it,” Miller said. “Whether that’s on the domestic (quality of water) side or reclaimed side, that’s irrelevant.”