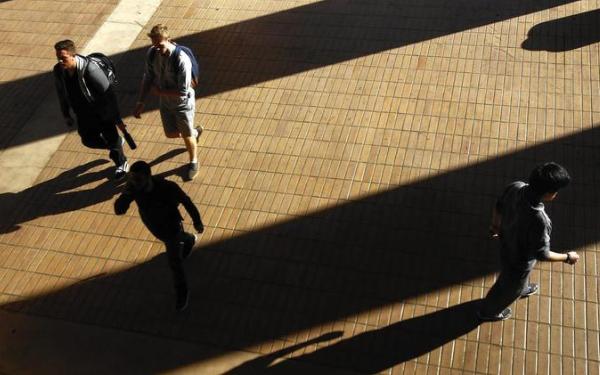 Cal State Northridge is expanding its use of video surveillance in all parking garages and lots, as well as in high traffic locations.
(Credit: Genaro Molina / Los Angeles Times)

Colleges and universities are teaming up with technology entrepreneurs in an effort to keep students safe — on and off campus — by using their smartphones.

Mobile apps geared toward campus safety are booming: with a few clicks, text messages will contact friends or social media, employ GPS to pinpoint a location and automatically connect to 911. Many will connect to campus security offices and national emergency hotlines.

Others use countdown timers that will automatically send messages and GPS information if a user is past due at a destination. Some apps use a Bluetooth connection to pair with a panic button that can be carried on a keychain to send a quick alert without the need to fish out a phone from a purse or bag.

And there are apps that can broadcast real-time video and audio to public safety officials. Campus police, for example, might provide a virtual escort by monitoring students as they walk across campus at night.

"Technology-wise, we've learned that if we're going to communicate well with this age group on campus, we've got to be able to use the mechanisms they're addicted to and that they love, and when we do that, we're more successful in getting the message out about safety," said Anne P. Glavin, chief of police at Cal State Northridge and past president of the International Assn. of Campus Law Enforcement Administrators.

Campus safety and surrounding-area crime statistics can be an important consideration for students and families making college choices. Fears have been elevated since shooting rampages at Virginia Tech in 2007 and in Isla Vista near the UC Santa Barbara campus in 2014.

And many colleges are under heightened scrutiny after complaints about their reporting and handling of sexual assault cases.

Some experts, such as Glavin, also expressed concern that fast bucks are being made from the fear of crime and that new technologies can provide users a false sense of security.

The Northridge campus is expanding its use of video surveillance in all parking garages and lots, as well as in high traffic locations. It is the first of Cal State's 23 campuses to use analysis software that can be programmed to detect objects and movements, Glavin said.

In addition, questions remain about the practicality of dismantling older security measures, such as those hard-to-maintain blue light call boxes that are located on many campuses. Many administrators acknowledge that the systems aren't getting much use but say they provide reassurance when there's no other recourse, such as a low cell signal, as well as defense against liability claims.

College and university officials and technology entrepreneurs said they see emerging mobile technology as part of a toolbox of responses.

Occidental College in Eagle Rock once considered installing hard-wired panic buttons around campus, but began exploring the use of mobile apps that were less costly. The campus recently partnered with app developer React Mobile to offer students a safety application that includes a personal panic button to supplement the escorts, blue light boxes and whistle alert safety programs already on campus.

Students will receive information about the free app during orientation and the devices — which cost $59 — will be available in bookstores. Tim Chang, associate dean of students, acknowledged that some students may not be able or willing to fork out money for the panic button. But for those acutely concerned with safety, reassigned housing, escorts or other remedies might be considered, he said.

The panic button will be affordable for many students, but ultimately institutions may choose to purchase the devices for everyone who enrolls, with a nominal fee reflected in tuition, React Mobile Chief Executive Robb Monkman said.

"We don't want to provide any sense of false security but to complement a sense of personal safety and complement existing safety measures for students and faculty, " Monkman said.

About 70,000 apps have been downloaded and nearly 5,000 panic buttons — called Sidekicks — have been sold, Monkman said.

Suzanne Scharlock has been using the Sidekick for a few months while studying at the University of Washington and said that she feels safer, especially at night when distracted phone users are more apt to become targets of theft or other crimes.

Her friends, though, have been a harder sell.

"Students are really concerned about safety and we'll make efforts to walk in groups, for example, but when it comes to purchasing personal devices they're more likely to buy something like pepper spray," said Scharlock, 22, who graduated last month. "But I can definitely see students' parents buying something like this for them."

Many app designers are taking advantage of — and sometimes being overrun — by swiftly advancing technology.

In a pilot program, University of Maryland professors developed a smartphone app that provided direct video and audio links, as well as GPS location, to campus emergency dispatchers. It was downloaded by nearly 1,000 users. But there were no resources to keep adapting the app to new versions of Android and iOS operating systems, said Major Marc Limansky, a University of Maryland police spokesman.

While many of the new breed of mobile apps can be customized to link to campus security offices, nearly all include features that allow students to alert a network of friends to their location and needs.

"Very often with the college demographic, we have kids who are underage," said Nancy Schwartzman, co-creator of the mobile app Circle of 6. Some of these students may put themselves in awkward situations and may not want to contact police if something goes wrong, she said.

Users of the free app choose a network of six friends who can be contacted via text message with alerts such as "Call me and pretend you need me. I need an interruption," and "Come and get me. I need help getting home safely." The texts include the sender's GPS location.

The app was co-winner in 2011 of a national Apps Against Abuse challenge sponsored by the White House. A version of the app customized for universities is in use at UCLA and other campuses.

"Right now it's very separated, with student safety in one silo and technology in another," she said. "Every kid has a cellphone and relies on it constantly. Schools have to update their thinking."