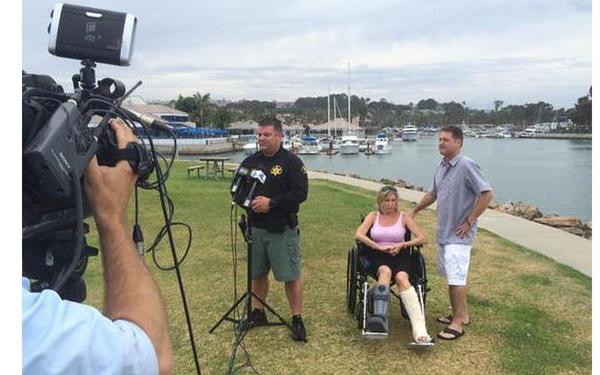 Chrissie Frickman's ankles were broken when a 750- to 1,000-pound dolphin landed in her family's boat in Orange County.
(Credit: Orange County Sheriff's Department)

Not every dolphin encounter is as happy as those with Flipper. Laguna Niguel resident Chrissie Frickman has two broken ankles to prove it.

Frickman was injured last month when a 750- to 1,000-pound dolphin hopped onto her boat and landed on her ankles. And just like that, Frickman was rendered immobile.

She and her family were understandably rattled.

“That dolphin could have crushed my kids so I am glad it was me, but we are all completely traumatized,” she wrote on Facebook.

She told the Orange County Register that she and her family came across a pod of dolphins June 21 near the Dana Point Harbor when they were on a boat trip celebrating Father’s Day and her wedding anniversary.

Suddenly one of the dolphins popped out of the water, hit the boat railing and landed inside, striking Frickman and “punching” her daughter, Frickman’s husband, Dirk Frickman, told the newspaper.

As the dolphin flopped around the boat, it “sprayed blood everywhere” because of cuts on its nose and tail, said Lt. Jeff Hallock of the Orange County Sheriff’s Department.

Dirk Frickman sped their boat toward the dock, along with a sheriff’s Harbor Patrol escort.

Once the boat was at a fishing dock, deputies worked quickly to safely move Chrissie Frickman off the boat and into an ambulance.

Meanwhile, deputies still had to contend with the dolphin, which by then had been out of the water for 20 to 25 minutes.

It took several deputies to remove the dolphin from the boat, get it onto the dock and then back into the water.

The dolphin survived the mishap, which to deputies appears to be simply a case of miscalculation, Hallock said.

The waters near the Dana Point Harbor are frequented by dolphins, and they often swim among the boaters. By all accounts, most dolphin encounters have been friendly.

That’s what makes Frickman’s dolphin encounter so unusual. It was a complete fluke, officials said.

“We've never seen anything like this before,” Hallock said.