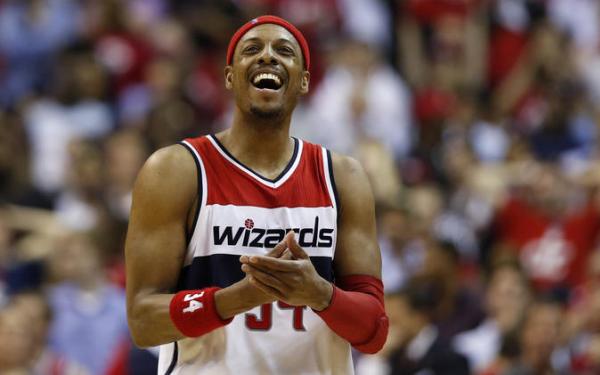 Paul Pierce reacts after a play during a Wizards playoff game against the Hawks on May 11.
(Credit: Alex Brandon / Associated Press)

The Clippers secured a giant lure in their pursuit of DeAndre Jordan on Wednesday, agreeing to terms with Paul Pierce on a three-year, $10.5-million contract that will reunite the veteran small forward with Coach Doc Rivers while presumably allowing Pierce to finish his career near his Inglewood home.

Pierce and Rivers won an NBA title together with the Boston Celtics in 2008 and will almost surely try to pitch Jordan on their collective potential with the Clippers, who will get the last word in the bidding for the free-agent center Thursday.

The Clippers will sign Pierce with their so-called mini-midlevel exception, their primary financial tool in free agency, and are expected to slot the former Inglewood High star into the starting small forward spot vacated by Matt Barnes when he was traded last month.

Players cannot sign contracts until the league-mandated moratorium on formal commitments ends July 9. Pierce's contract calls for him to make $3.37 million next season, $3.57 million in 2016-17 and $3.67 million in 2017-18, with the final year being a team option. That's roughly half the amount per year Pierce could have made with the Washington Wizards, who were reportedly willing to pay him $6.6 million to return next season while providing a team option for a second year.

The deal represents a massive triumph for Rivers, who has been widely maligned in his role as the Clippers' president of basketball operations. Rivers tried to persuade Pierce to join the Clippers last summer before committing the team's midlevel exception to Spencer Hawes, a disappointment who was traded to the Charlotte Hornets last month.

Pierce, who turns 38 in October, is a 17-year veteran and 10-time All-Star who gives the Clippers some championship experience in their starting lineup and a clutch presence who hit a game-winning shot in the Eastern Conference semifinals last season for the Wizards.

The only potential concern about Pierce is his durability; he has logged 50,446 minutes in his career, including the playoffs, and averaged only 26.2 minutes per game last season to go with career-low averages in points (11.9), rebounds (4.0) and assists (2.0). But the Clippers won't need Pierce to carry the offensive load in a lineup that will include All-Stars Chris Paul and Blake Griffin and, possibly, Jordan.

Pierce's presence could help the Clippers make a compelling presentation to Jordan after the NBA's leading rebounder was wowed by the Dallas Mavericks in a 2 1/2-hour pitch meeting Wednesday. A person close to Jordan said the Mavericks "set the bar high" during a gathering attended by team owner Mark Cuban, President Donnie Nelson, Coach Rick Carlisle and players Dirk Nowitzki and Chandler Parsons.

The Lakers met with Jordan on Wednesday night, making what a source close to the player described as a "somewhat underwhelming" pitch, and the New York Knicks were scheduled to make a presentation Thursday before the Clippers. Griffin and Paul are not expected to attend the Clippers' pitch meeting, having spoken privately to Jordan about their desire for him to return to the only NBA team he has known in his seven professional seasons.

The Clippers lost one potential replacement for Jordan on Wednesday when Tyson Chandler reportedly agreed to sign a four-year, $50-million-plus contract with the Phoenix Suns.

The Clippers were expected to engage the Mavericks in a sign-and-trade swap of centers involving Chandler had Jordan decided to sign with the Mavericks.

Clippers executives embarked on the process of bolstering their bench by reaching out to representatives for free-agent swingmen Gerald Green, Wes Johnson and Caron Butler as well as shooting guard Willie Green, though they no longer have a glaring need for a small forward after securing Pierce and Lance Stephenson. They are also believed to have interest in former Lakers point guard Jeremy Lin.

Free-agent guard Austin Rivers, who had a handful of breakthrough performances with the Clippers in the playoffs, caused a brief stir when he tweeted that he had "to do what I got to do. No hard feelings" before quickly removing the post. A person involved with the league said there were no developments regarding Rivers signing with a team.

As expected, the Clippers fully guaranteed Jamal Crawford's $5.6-million contract for next season, though the team could trade the star sixth man as it tries to fill holes at backup point guard, power forward and center.