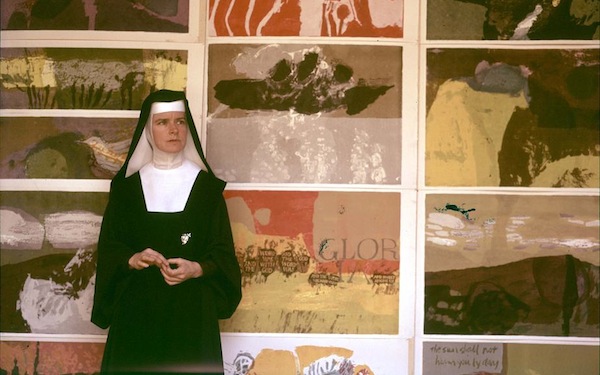 If we look to our left and to our right, examining the state of our world, we can see a lot of impressions of darkness, despair, and the threat of the fact that those things will never dissipate and cease to call us neighbors. So, we reach out to the unknown, hoping to grasp something made of light, and we often come back empty-handed. So who better to guide us than those who have already traversed similar gravities, those who can teach us how we can not only manage the often-suffocating nature of living, but also find a sincere spirit of hope within the shadows? Who better than Sister Corita Kent?

At first glance, she may seem like just another nun. Devoted to her order and devoted to the worship of God, and while yes, she was those things, Sister Corita also expanded her scope of influence beyond the heavens, not limiting her gaze upwards, but outwards to this earthly world where news of hope and news of change were imperative to the survival of the human spirit. This was the 60s after all, and if you happened to have lived during that tumultuous era of coinciding revolutions of war and love, it was, to say the least, a confusing existence. To combat this confusion, attempting to make sense of what the world was going through, Sister Corita used art as the common ground to express frustration and relief.

Far before Vietnam and before the extreme political climate aimed to shake up America and the world to its core, Sister Corita embraced design as her passionate truth. First an art teacher at elementary school, and later obtaining a Masters in Art History at USC, visual expression seemed to always direct the pulse of Sister Corita’s life. It was an amenable companion to her order as a nun, something that offered direction and inspiration, albeit from very different sources.

It was in 1952, when she produced her first silkscreen print of “The Lord is With Thee” that heads began to cock and eyes began to gaze at her images, which embraced darkness by expending it. But the coming of the 60s and all of its conundrums is really what sparked the desire for Sister Corita to go beyond passively testifying to instead do something much greater. It became about opening society and ourselves to a new way of perceiving conflict, by not withstanding but surpassing the forces that aim to stifle our humanity.

Thus, she introduced striking popular images and texts into her work, in hopes of flipping familiar experiences on their head and offering a new consideration of what we experience in our day-to-day lives. Off the bat we may think of other artists like Andy Warhol who embraced pop culture to direct attention to our methods of consumerism and voyeurism, but Sister Corita wanted more, and often was begrudged that hope with woeful resistance.

Despite any naysayers, however, her art steadily gained attention and power around the globe for recognizing an unsavory fact about our political and social nature, as she consistently focused on the most monumental occasions of the time, like the assassination of Martin Luther King, Jr. With a simple slogan, “The King is Dead; Love Your Brother,” Sister Corita conjured intense emotion of an atrocity done, but looked forward to instigate the change that could overcome it.

It may go without saying, but we cannot deny the fact that our present world, one similarly precarious and complicated, still yearns for changes that need to be made as more atrocities take place. The activism and art of Corita—yes, she left her order and dropped the “Sister” in 1968 to fully pursue her art—are a blueprint for our generation in seeking, maybe not answers, but hints at solving the complex wars we have instigated with ourselves, with our neighbors, with our brothers. Although a voice of an era gone by, Corita Kent’s work is timeless, for now more than ever we need influences and images of raw beauty that can shake us out of this stupor of hatred and fear.

That brings us to the Pasadena Museum of California Art, where the works of Corita Kent have made their final stop on a tour across America. Time could not be more fitting as we as a nation are grappling with many battles, and winning many (!), yet still we need a learned voice that can remind us of the color that fills our graces, that make it worth standing next to one another and fighting for change that we can only hope will come someday. And would you look at that? It seems that Someday is Now.

Make sure to catch the exhibition, Someday is Now: The Art of Corita Kent at the Pasadena Museum of California Art, displayed now until November 1st.