Filling L.A.'s new Broad museum is an art in itself 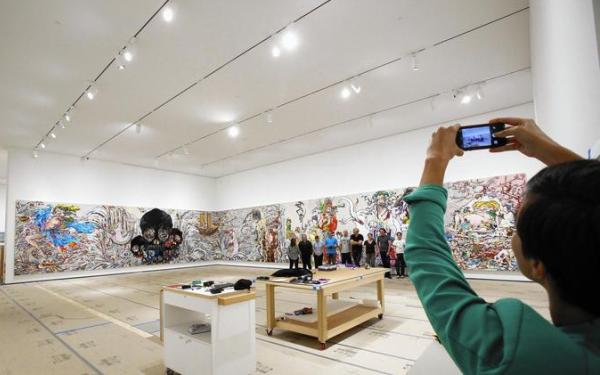 Alex Capriotti, director of marketing and communications takes a photo of all involved in the installation of the 2014 painting, "In the Land of the Dead, Stepping on the Tail of a Rainbow."
(Credit: Anne Cusack / Los Angeles Times)

Joanne Heyler steps off the long escalator that runs through the belly and onto the third floor of the cavernous new Broad museum in downtown L.A. She sweeps her arm toward the gleaming white galleries. With heavy wooden crates containing art clustered along walls and in corners, she beams, even though there isn't much to see.

The 120,000-square-foot, $140-million museum where Heyler is founding director and chief curator has just about 2 1/2 months until its opening, and yet it remains remarkably unfinished. "Starkly modern" would be a more kind way to put it, and the thought makes Heyler laugh.

"May 18 was our move-in day," she says. "The entirety of the collection will ultimately be in the building, so that's a very long process for many reasons."

Hanging a dozen or so paintings in a day is a common task in museums, but opening an institution like the Broad and choosing which of its remarkable, rarely seen artworks will grace the walls first — that is an entirely different can of wall hooks. It's a challenge that grew larger — much larger — when the Broad recently announced the acquisition of 50 works including a painting by Japanese artist Takashi Murakami, "In the Land of the Dead, Stepping on the Tail of a Rainbow," that is 10 feet high and 82 feet long.

It's the largest piece in the collection, and not a single wall in the new museum is big enough to accommodate it. Heyler realized the Murakami would fit only if "Tail of a Rainbow" spread across two walls, with a couple of the painting's 25 panels meeting at an angle in a corner.

The artist granted his permission, and on a sticky afternoon last week, the painting arrived from New York at the museum's loading dock inside a climate-controlled 18-wheeler with air-ride suspension, proving that you never know what might be inside that truck on the freeway.

Heyler was there to greet it, as was the Broad's director of collections management, Vicki Gambill, spunky with bright red streaks in her hair; the head preparator, Julia Latane, serious and resolute, with a tattoo of a hammer on her forearm; and seven trusty preparators who will keep hanging art right up to the Broad's Sept. 20 opening.

About half of the Broad's 2,000 artworks have made their way from warehouses around the city, where they had been stored by museum founders Eli and Edythe Broad. Now all this postwar and contemporary art, by some of the most recognizable names of the last 40 years, is heading to a single place for the first time. An inaugural exhibition will consist of 200 pieces, and the remainder of the collection will be stored in a museum vault that was constructed so that visitors can peer inside.

One by one, the artwork is making its way onto the walls, guided by Heyler's vision and an expert team of preparators. The museum is not yet divulging which works will be on view for the opening, and most remain in travel frames and packing crates, ready to be excavated like pearls.

When the Murakami mural arrives in five massive wooden travel crates, each containing five panels, the crates are unloaded and vacuumed, then pushed on dollies into the freight elevator nicknamed Big John after a construction worker who spent much time in it. Big John is the size of some studio apartments and was built to accommodate the girth of a giant Ellsworth Kelly sculpture aptly titled "Green Angle"; unlike the Murakami, the Kelly cannot be broken down, and in its travel frame it measures nearly 20 feet wide.

"Everything we do is on a case-by-case basis," Gambill says of the processes for shipping and receiving art. "There is no normal."

And that's the fun of it, Latane adds.

"Contemporary art is so varied in form, material and scale that you often need to devise new approaches for moving and installing certain pieces," she says. "That's what makes the work infinitely interesting and complex. Preparators love solving problems."

Two days later the same team gathers in the gallery with Heyler, uncrating the Murakami panels and beginning the lengthy process of putting them up on the wall. The problem in need of immediate solving is how to make sure that each of the 25 panels lines up exactly, particularly where they meet in the corner.

"It's a brand-new building, and it's expertly constructed, but the wall, by the tiniest fraction, is not completely flat," says Heyler, who has been deeply involved with every aspect of the galleries' function, down to hundreds of LED fixtures. They have been turned just a bit cooler than normal to blend with the natural light seeping through the museum's third-floor skylights. The effect is a bit like the light on a Greek island in late afternoon.

Bathed in this ethereal glow against a stark white wall is the Murakami — in its many pieces, a dazzling tumble of color and seemingly infinite detail. Shiny scaled fish dive and thrash, and boats tremble on an angry swirling sea, anchored quite ominously by a pile of monstrous black skulls that pull the viewer into momentary darkness.

"I'm still getting to know this piece," murmurs Heyler, stepping in close to the painting and then backing up to the far wall, to make sure the height suits her. "Do you want the work to feel immersive? What kind of relationship do you want it to have with the body given the muralistic scale? It's basically a gut call."

This whole time Latane and her crew of preparators have been busily hanging the panels on the wooden French cleats that came with the mural. Cleats, Gambill explains, are an old-school way of hanging cabinets on walls — two pieces of wood that interlock, one over the other.

"One, two, three and up!" the four preparators say as they hoist each panel onto its cleats. They work quickly and efficiently, often without talking. Latane calls it a choreographed ballet.

"Let's squeeze it in a little here," she says, motioning for them to push a panel flush with another.

After all 25 panels have been hung, what Heyler calls "the magic of shimming" will begin. Shims, or material wedged into a space to fill a gap, are what the team will use to get the panels to line up seamlessly.

When half the panels have been placed on the wall, Heyler says, the gallery begins to feel a bit like a film set: You just want to see the completed movie, but you might need days to get a shot right.

Latane, however, admits to having a bit of a dirty secret. All day people have been crowing about the impressive scale of the painting and how daunting it must be to hang, but in reality it has been a breeze for her team.

"There are 25 paintings to be installed, and they all happen to be next to each other, and they're all the same size. It's very straightforward because every painting is designed with the cleats on it and they go up very quickly," she says with a smile.

She adds: "It's not very stressful for my team. I think it was more stressful for Joanne trying to decide where to put it in the gallery."

A little after 4 p.m., the 25th panel — signed on the back by Murakami and his team of artists — is placed on the wall. Everyone claps.

It doesn't exactly match the model in the curator's dollhouse upstairs where Heyler has been creating a scale mock-up of her dream exhibition, but it's awfully close.