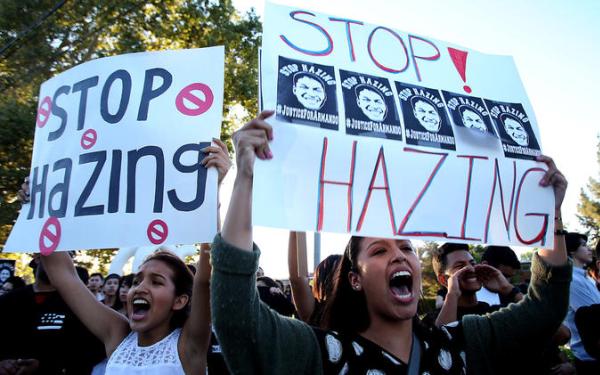 Family and friends of Armando Villa, who died in a hazing incident, rally last July to call for an end to fraternity hazing at Cal State Northridge.
(Credit: Luis Sinco / Los Angeles Times)

LOS ANGELES — The family of a California State University, Northridge student who died in a fraternity hazing incident is suing the university and fraternity, saying they still don’t know what happened to him a year after his death.

Armando Villa, 19, died July 1, 2014, after becoming dehydrated during a hike in Angeles National Forest while pledging for Pi Kappa Phi. School officials have said the hike was part of a hazing incident and that Villa had hoped to join the fraternity, which has since shut down the local chapter.

But Villa’s mother and stepfather, Betty and Joseph Serrato, say they have been left in the dark.

“It’s been a year since Armando’s death and we still have no answers,” Joseph Serrato said in a statement. “No one has stepped forward to tell us what happened to my son. I am angry and terribly sad.”

Now the family’s attorney, Douglas Aberle, says they have filed a lawsuit against Pi Kappa Phi and CSUN over Villa’s death. They are seeking unspecified damages.

“Their conduct led to the death of this 19-year-old man, who was on his way up in the world,” Aberle said Wednesday.

Aberle said the national fraternity organization and university were warned about the CSUN chapter’s inappropriate activities before Villa’s death and did not take action.

“Both the university and the national chapter should have read this as a warning sign and eliminated the local chapter. But Pi Kappa Phi national has a history of inadequately supervising its local chapters,” he said. “Armando and his family have paid the price for their negligence.”

The family says the school and the fraternity’s national organization should have supervised the CSUN chapter and its members.

Villa pledged with the fraternity in 2013 after enrolling at CSUN as a freshman, Aberle said. When he went out for the hike, Villa was forced to wear ill-fitting shoes during the hazing, he said. The fraternity leaders didn’t bring enough water, so Villa and a friend left the group in search of more water, Aberle said.

Pi Kappa Phi has declined to comment about litigation. But in a statement Wednesday the national organization said its CSUN chapter was permanently closed in September 2014.

“Our thoughts and prayers remain with Armando’s family and all those affected by his passing,” Pi Kappa Phi Chief Executive Mark Timmes said.

The university, he said, immediately launched a formal investigation into the incident and determined that the pledge process fit the definition of hazing. Hazing is a violation of CSUN’s student conduct code, as well as its code of ethics for student clubs and organizations.

“CSUN had no knowledge of Pi Kappa Phi’s actions,” Noblitt said. “Following CSUN’s independent investigation, the university permanently banned Pi Kappa Phi from ever operating on campus again. The death of Armando was a tragedy and our hearts continue to go out to his family and friends.”

Campus News
Colleges campuses are trying to reopen in the fall. The main source of opposition? The faculty
38 views