Will Gavin Newsom's post-Pride glow get him the governorship? 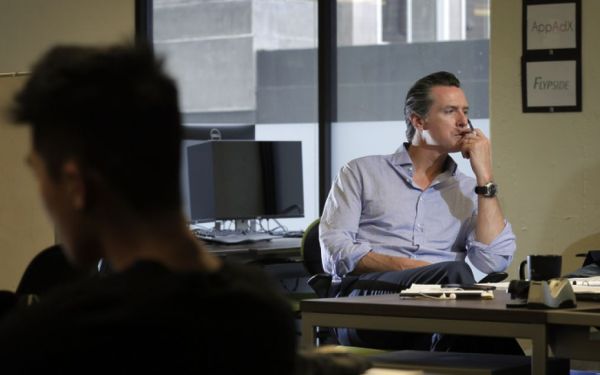 Rousing chants of “Gavin! Gavin!” echoed off nearby buildings as Lt. Gov. Gavin Newsom acknowledged the cheers of support from thousands of people along San Francisco’s Market Street during the Pride Parade last month.

Days later came the political reality check: the first-quarter campaign fundraising deadline for Newsom, who is in the 2018 race for governor. Newsom spent his time sending out last-minute appeals urging supporters to endorse his campaign by becoming founding “Team Gavin” boosters.

The work paid off: The reports show that Newsom raised $2.7 million from February to June, and already has $5.5 million cash on hand.

Still, with other Democrats, such as billionaire activist Tom Steyer, hinting at a run, and former gubernatorial candidate Steve Westly having announced his intention to join the race, those two events dramatize Newsom’s challenge: how to keep the attention — and the money — coming for a race that’s still almost three years away.

Newsom, who hasn’t exactly been on center stage the past few years as lieutenant governor, in recent days reclaimed the spotlight that shone on him in 2004, when as San Francisco mayor he shocked the political establishment — and the nation — by marrying thousands of gay and lesbian couples at City Hall. When the U.S. Supreme Court declared same-sex marriage legal across the country on June 26, it was Newsom’s cue to remind his supporters that’s he’s still here — and his opponents that he isn’t going anywhere.

Some Democrats, especially LGBT activists, insist that Newsom doesn’t have to worry about whether his headline-making actions will fade from memory.

“We will never forget what Gavin Newsom did for gay and lesbian voters in California,” vowed South Bay Democratic activist Gloria Nieto, who, along with her activist wife, consultant Jo Kenny, credits Newsom with being the catalyst for the events that ended with the Supreme Court’s 5-4 decision.

Democratic consultant Dan Newman of SCN Strategies, the team advising Newsom on his gubernatorial run, said that in the days after that decision, Newsom was continuously mobbed by gay and lesbian supporters, many “in tears, with moving stories about how his actions helped their family.”

In an interview this week, Newsom said he is gratified by the outpouring of support, but he also argued, “Gay marriage was about people — but it was also about the principle that we have the capacity to change things.

“Hopefully, if there’s any message ... it’s that it’s not a single issue, it’s a style of resolve and commitments — you can call it leadership,” he said. “You are given a moment in time, you say what you think and the consequences are the consequences. I’m not going to wait for the prevailing winds.”

He said he will be guided by what he calls “the spirit of the Obama campaign ... to say, ‘Don’t read the polls — change the damn polls.’”

Conservative political commentator Patrick Dorinson, who writes the CowboyLibertarian blog, says that outlook forever casts Newsom as “a founding father ... the Mount Rushmore of the (marriage equality) movement. He will go down as the guy who stuck his neck out, and he’s been vindicated,” Dorinson said. “He could have played it safe, and he didn’t have to.”

But that association may be a problem as well as an asset, one that “lasts for his supporters — and it lasts for his enemies,” those social conservatives and even independents who still think Newsom overstepped his boundaries, Dorinson predicted. “When he passes away, half of the people will be there to praise him — and half will be there to make sure he’s dead.”

No matter, says Democratic political consultant Garry South, who served as the chief consultant for the gubernatorial campaign of Westly and for Newsom when he challenged Jerry Brown for governor in 2009 before dropping out. He says Newsom’s public service experience and his unapologetic advocacy on a range of issues have given him a critical advantage at this point in the race.

South recalls being among the Democrats who predicted Newsom’s political demise when he allowed same-sex marriages at City Hall.

“The Supreme Court decision just validates what he did in 2004 ... and in 2018, he will be looked at as prescient, way ahead of his time,” South said. “Because this issue most likely would never have ended up in front of the Supreme Court if Gavin Newsom didn’t take that action.”

And while marriage equality may be his signature issue now, Newsom “is not a single-issue candidate,” South says. “He never has been.”

South recalls that Newsom’s unsuccessful run against Brown reminded voters that as San Francisco mayor, he was seen as a pro-business Democrat who also made controversial moves on universal health care, environmental stewardship and climate change, the minimum wage, homeless strategies, and initiatives to attract tech to the city.

And Dorinson notes that Newsom is the only major public official in California to publicly back marijuana legalization, another issue where polls have shifted dramatically in recent years.

“I’ll give him this: He’s got the ability to see 10 years ahead and position himself properly,” while as lieutenant governor, “he’s avoided all the goofy stuff in the Legislature,” Dorinson says.

Newsom’s record of public-service wins could serve him well in the new playing field of California’s top-two primary system — where the top two vote-getters in a primary advance to the general election. In the solidly blue state, he could face another Democrat in the general election — especially running against two wealthy Democrats connected with Silicon Valley, South said.

Though Westly served as state controller, he hasn’t been in office since 2007, and Steyer has never held elected office. Like Democrat Al Checchi and Republican Meg Whitman, two previous wealthy candidates for governor, South predicts that Westly and Steyer could face withering scrutiny into their investments, income and business decisions in the private sector.

Tim Donnelly, a Tea Party favorite and candidate for governor in 2014, said Newsom’s path is hardly free from hurdles and that issues he’s pushed will cause concern among conservatives, independents and moderates.

“Gavin’s biggest obstacle is Gavin Newsom,” he said, as voters ask themselves, “Do we want another goofball like Jerry Brown who is so far left — or do we want someone who has a more common-sense approach?”

Either way, the election is “still a lifetime away,” Donnelly says. “Or three lifetimes, in California politics.”

Still, South, who also advised Democrat Gray Davis in his winning 1998 gubernatorial race — making Davis one of only three sitting lieutenant governors in history to ascend to the top job — says Newsom is “very well positioned” to join the club.

Though the job of lieutenant governor is largely undefined — Newsom once even questioned its necessity — the statewide office comes with the benefit of visibility and even prestige among many voters who see the post as the state’s “vice president.”

Newsom, with his many causes, has “used it to a fare-thee-well,” he says.

Now, observers say, he’ll just have to keep that up — for another three years.