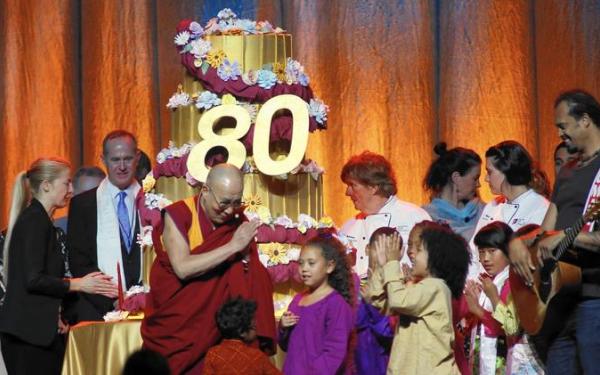 Words failed Yangchen Dolkar as she tried to explain why it was so important for her to bring her three young children Sunday to see the 14th Dalai Lama speak in Anaheim.

A Tibetan who grew up in exile in India and now works as a physician in San Francisco, she views the charismatic monk as greater than any sage or leader.

"He's much more than what I can explain. He's like God to us. It's hard for them to fathom what I mean," said Dolkar, pointing to her three children — all named Tenzin after the Dalai Lama's own name, Tenzin Gyatso — as they giggled at her feet. "If they see him and hear his wisdom ... it's an important part of being a Tibetan."

Dolkar and her brood were among about 18,000 who flocked to the Honda Center to commemorate the Nobel Peace Prize winner's 80th birthday at the Global Compassion Summit.

The Dalai Lama's actual birthday is Monday. Organizers chose the early celebration to coincide with his birthday in Tibet.

"He has loved us. Today is our chance to show him that we love him back," said former "Today" show co-anchor Ann Curry, the day's master of ceremonies, as she greeted the Dalai Lama onstage.

She went on to introduce fellow Nobel Peace Prize winners Jody Williams and Shirin Ebadi; actress Julia Ormond; and comedian George Lopez, among others. The crowd of actors, activists and academics poured praise as the exiled Tibetan leader sat in a tufted white seat at the center of the stage.

The number of speakers caused some discontent among attendees. After Ormond spoke on the necessity of empathy as an actress, one voice from the grandstand crowed, "Let his holiness speak!"

When the man of honor did, finally, begin his exposition on compassion, he held his audience rapt.

"As a human being, as a social animal, every individual has a moral responsibility to think of the well-being of humanity," he said. Waving his right arm to signal key points, he challenged religious ideologues to practice "unbiased compassion."

His signature playfulness was on display, especially when he recalled a "hard-liner" once labeling him a demon.

"When I first hear that I said, yes, I'm demon," he said, laughing as he cupped his hands like horns over his head. The birthday bash was not without controversy. Hundreds of demonstrators gathered outside the Honda Center, as they have on the Dalai Lama's prior visits to the U.S. They object to his advice not to worship Dorje Shugden, one of hundreds of Tibetan Buddhism's "protector deities" — named for their ability to shield and help their devotees.

For decades, the Dalai Lama included Shugden in his daily prayers. But under the counsel of his personal oracle, he repudiated the practice in 1975, contending that Shugden was a malevolent spirit that was dividing Tibetans.

Shugden practitioners such as Lizette Fowler, who traveled to Anaheim from Britain to protest what she described as the Dalai Lama's "ban" on Shugden practice, said he is practicing religious discrimination.

"I feel excommunicated from the Buddhist community because of the things he says about my practice," said Fowler, 48, who works as a meditation teacher south of London. "He only has to say 'Please give everyone religious freedom. Please don't discriminate against Shugden practitioners.'"

The three-day jubilee continues at the campus of UC Irvine this week with the Dalai Lama leading panels on climate change and wisdom. On Tuesday, the final day of the Global Compassion Summit, he will speak about youth leadership and values-based education.

Before the event began, the Dalai Lama gave a special speech to select VIPs including Kardashian matriarch Kris Jenner and actress Melanie Griffith, in a room beneath the cavernous arena.

After the birthday celebration, Anaheim Mayor Tom Tait, who has launched a campaign in the Anaheim public school system to encourage students to practice kindness, led a gathering for Southern California politicians to hear from the Buddhist leader. There, the Dalai Lama challenged governments to foster "loving-kindness" through public policy.