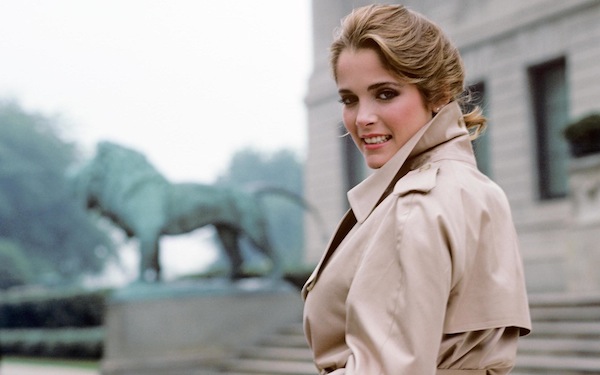 Way back in 1954, a cultural phenomenon had begun when Margie Harrison was named the first Playmate of the Month. It was only Playboy magazine’s second issue, and no one, not even fellow Playmate Marilyn Monroe or founder Hugh Hefner himself, could have known the road that lay ahead. Over the next six decades, Playboy would set the bar for gentleman’s magazines, spreading images of women who possessed the most voluptuous traits while still maintaining a “girl-next-door” grace about her.

But what do we really know about these women? Besides the gossip, the tabloids, and the ridiculous reality shows that have come to skew our idea of these young ladies, there is undoubtedly something missing—something truer, something of heart and pride that our iconic Playmates must have bursting from within. That’s why we want you to meet Charlotte Kemp.

As Miss December 1982, as was the one who coined the term “Playmates with a Purpose,” and as a protector of the true nature of what it is to be a Playmate, Kemp is here to set the record straight concerning the girls behind the magazine with her new book Centerfolds. Featuring interviews with eighteen other Playmates who scored centerfolds from the 60s through the 90s, as well as the photographers who created the iconic images that have reached millions of readers throughout the world, for Kemp, it’s an imperative read.

“Everything in my book is firsthand accounts; it’s not hearsay; its not gossip; it’s not a tell all—these are our lives. All the stories out there right now are, you know, Playboy PR, the imagination of the machine. But there’s so much more about us. I wanted to share those stories,” Kemp explains.

While Centerfolds does inevitably unfold tales from of what happened within the walls of the Playboy Mansion, including the celebrity encounters and wild social lives of these women, Kemp wanted to approach the superficially enticing world from a different perspective—one that’s not grubbing for attention, promoting sexual fantasy and promiscuity. Instead, she wants to show that these women are, well, profoundly human, which is something that she believes we have all forgotten, thanks to pop culture spectacles like E!’s “The Girls Next Door.”

“The fact is that when ‘The Girls Next Door’ came out, it made us look like we were idiots. I was embarrassed actually,” remembers Kemp. “I watched it a couple of times and was like, ‘you’ve gotta be kidding me!’ Most of the women I know are professional, beautiful women in mind, spirit, and body. Now it’s just all about being younger and skinnier, which I understand how it has to evolve, but it’s not the philosophy of what we were brought into. It was more like art; it was more glamorous. You know, Holly Madison [of TGND] said, ‘I take Quaaludes.’ I would never have done that. She really dampens and puts Playboy, and then us, in a negative light. And that’s not what it was about at all.”

Just hearing her talk about the book makes it increasingly clear that Kemp and her fellow Centerfolds are extremely proud of the role that they played in the mega-brand, which isn’t too surprising seeing as there are millions of applicants a year, and only twelve young women are chosen; however, they still don’t manage to feel exploited or degraded. If anything, Playmates feel misunderstood, especially when it comes to girls like Madison who parade as Playmates, when they are, in fact, not.

“I would like people to see that these are our lives. As the girls next door—the real girls next door—these wonderful things happened, as well as some not-so-wonderful things. This is proof that we’re not just pictures on a page. We have lives. Fans always say, ‘I want to know this, I want to know that,’ and that’s kind of where I started in the book: let’s tell our stories of our lives,” Kemp says.

Perhaps its with the evolving landscape of the Playboy brand, which seems to constantly be engaging with even racier, raunchier, and degrading tactics of luring consumers, that Centerfolds becomes somewhat of a plea to those who need to reestablish a connection with the women, not just the skin they happen to flash. It’s about regaining control of how the world interacts with narratives rather than the gloss on the page—an idea that has since been worn down over the years.

Kemp explains, “When I was first a Playmate, they had a clause in the contract that you could not be a former stripper, or yada yada. Then Anna Nicole Smith came in and she was a stripper for years… Everything’s just gone downhill because with the times; they’ve changed. Our years were the best. They were real iconic years.”

CENTERFOLDS IS AVAILABLE AT BOOKSTORES AND AMAZON.COM NOW!