One reigning MVP is missing as All-Star reserves, pitchers announced 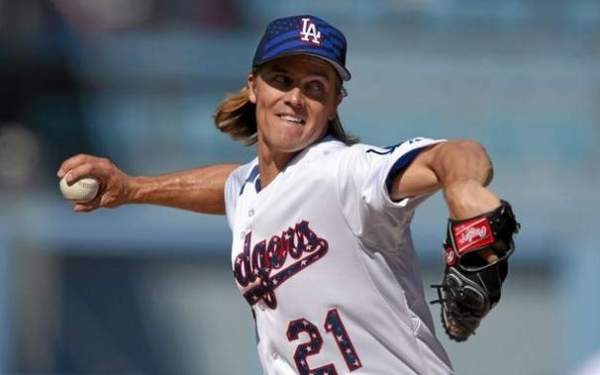 One 2014 Most Valuable Player (Mike Trout) is a guaranteed a spot in the upcoming All-Star Game. Another (Clayton Kershaw) is not.

That might have been the biggest surprise — locally and nationally — when the reserve All-Star position players and pitchers were announced Monday. The game will be played July 14 in Cincinnati.

Kershaw, meanwhile, is one of five “Final Vote” candidates in the National League. Fans can vote for either Kershaw, Johnny Cueto, Jeurys Familia, Carlos Martinez or Troy Tulowitzki online through 1 p.m. Friday.

National League manager Bruce Bochy chose his own ace, Madison Bumgarner, to his All-Star staff rather than Kershaw, as well as A.J. Burnett, Jonathan Papelbon, Francisco Rodriguez and Michael Wacha.

“I know if I’m coaching and I don’t put my own guy on there, I’m probably going to get a lot more flak from him than he’s going to get from me,” Kershaw said. “So I don’t think that’s the wrong decision by any means. ... If Donnie was the manager and it was the same situation, I would hope I’d get to go.”

“I was a little bit surprised,” Grandal said of Kershaw’s omission, “but I’m pretty sure he’s going to be picked. He’s Clayton Kershaw and I think he leads the league in strikeouts. He’s been pitching great, his ERA is down and there’s not really much you can ask from a guy that started off the season not as good as everybody hoped.”

“I think he’s deserving,” Greinke said of Kershaw. “I voted for him in our players’ vote just because his peripheral numbers are probably the best in the game. Can’t do much better than that.”

Grandal, a first-time All-Star, said he had plans to go to Las Vegas if he wasn’t chosen.

“We were waiting for it and if it happened, great, we would cancel everything,” he said.

Pederson is one of two rookies, along with Chicago Cubs third baseman Kris Bryant, chosen to the game. He called the selection “humbling.”

“Andrew Friedman came up to me and said, ‘Donnie wants to talk to you in the office,’ and usually that’s not a good sign,” Pederson said. “So I went in there and, yeah, the mood changed quick.”

Pederson’s 20 home runs (entering Monday night’s game) were tied for fifth in the National League. He figures to have an excellent chance of being chosen to participate in the annual Home Run Derby on July 13, particularly with National League home run leader Giancarlo Stanton out due to an injury.

“They asked me earlier, a couple of weeks ago, and I said if I made the team I’d consider being in the home run derby,” Pederson said. “I haven’t heard anything since being on the team, so we’ll see. … I think probably the only reason I’m in the All-Star game is because I have some home runs. But, yeah, I think it would be pretty fun. Never done one before.”

Gonzalez, who ranks among the top 10 in the NL in home runs, doubles, RBIs, slugging percentage, has already appeared in four All-Star games in his career. Greinke, who leads the NL in earned-run average, has appeared in two.

“It’s nice,” Greinke said. “My family enjoys it more than I do, so it’s good for them. ... Probably the best part is just getting to talk to all the best players in the game and learn a little bit of them and what makes them good and seeing them up close.”

Kershaw could still take part in the game as an injury replacement. In 2012, Dodgers outfielder Matt Kemp was chosen to the NL roster while injured. Atlanta Braves third baseman Chipper Jones, then a Final Vote candidate, was removed from the online ballot and took Kemp’s place on the roster.

Dodgers third baseman Justin Turner, whose .312/.386/.558 slash line ranks among the National League’s best, is also a candidate to step in as an injury replacement.

MLB announced that Pujols will start in place of injured Detroit Tigers first baseman Miguel Cabrera, who was chosen to start by the fans. It’s the eighth start and the 10th trip to the All-Star Game for Pujols — his first since 2010 as a member of the St. Louis Cardinals.

Including Pujols, only seven players have started five All-Star games.

The Angels haven’t had two starters since Troy Glaus and Garret Anderson in 2003.

The Kansas City Royals will have six All-Stars for the first time in franchise history in a year that Ned Yost will manage the American League squad. The St. Louis Cardinals have an NL-leading five All-Stars.