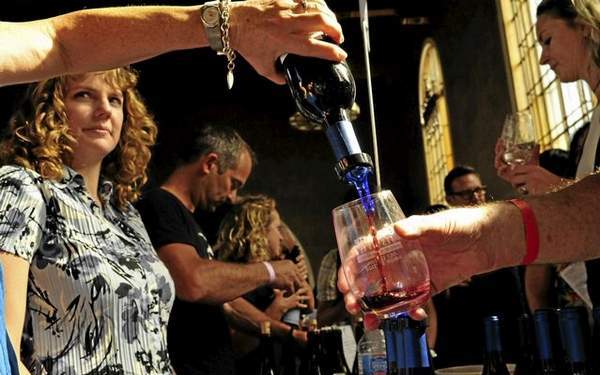 Wine fans get to try wines made in small batches and meet the winemakers, too, during the upcoming “Urban Exposure” Garagiste Festival at The Wiltern.
(Credit: Courtesy photo)

Lora Marie Taylor has broken through the wine glass ceiling, so to speak, but admits there’s still work to be done.

The Valencia resident started pursuing her passion of winemaking in her garage when she wasn’t at work as a production accountant for the Bravo reality show “Keeping Up with the Kardashians.” She poured her first glass of Bellissimo wine at a festival in March in Solvang and is eagerly looking forward to the Los Angeles Garagiste Festival: Urban Exposure at The Wiltern on July 11.

Touted as the largest gathering of the best of California’s micro-production winemakers, the festival is expected to feature more than 200 wines and an Artisanal LA mini pop-up showcasing edible and sustainable handmade treats from local up-and-coming artisan food makers.

Garagiste (pronounced gar-uh-zhe-stuh) is a term first used in the Bordeaux region of France to deride small-lot winemakers, who many times work out of their garages and are known for making and following their own rules when it comes to winemaking. The aim of the festival is to bring such winemakers together with a wine-appreciating public interested in micro-productions.

Another byproduct, however, is to showcase the growing presence of women winemakers in the state and industry, organizers said.

“I spent five years making wine in my garage and had my first commercial release in 2013. I don’t mind being small. I’m adventurous and love trying new things,” said Taylor.

That’s why when it came to selecting a logo for her wine, Taylor chose a bull. When her family lived in El Paso, Texas, they spent every Sunday after church attending the bullfights in Juarez, Mexico, so she sees the bull as brave and smart — and you have to be a bit of both to succeed as a winemaker, regardless of gender, she said.

Now Taylor’s goal is to open a tasting room in Newhall.

Fellow winemaker Angela Soleno, who describes herself as a one-woman show at Turiya Wines, also will attend the festival and is excited to showcase her batch of wines.

“Smaller productions allow for more fine-tuning and attention to the finished product,” Soleno said. “I’m able to smell each bin as it ferments and I can taste it, too. I can listen to the wine so much more. I allow the wine to become wine and fix it if something goes wrong.”

“We have always felt that finding undiscovered winemakers is like discovering a new band in a club before they have a hit record, so The Wiltern’s rock ’n’ roll history is a perfect fit for these renegade, under-the-radar winemakers,” Minnick said. “And, as our fans know, a really cool venue is an integral part of the Garagiste experience.”

“As always, we will have one-on-one interaction with the winemakers, an unmatched tasting range of amazing hard-to-find wines, a ‘no-snobs-allowed’ atmosphere, and just plain fun,” Minnick added.