Surge in L.A. crime in first 6 months ends more than decade of declines 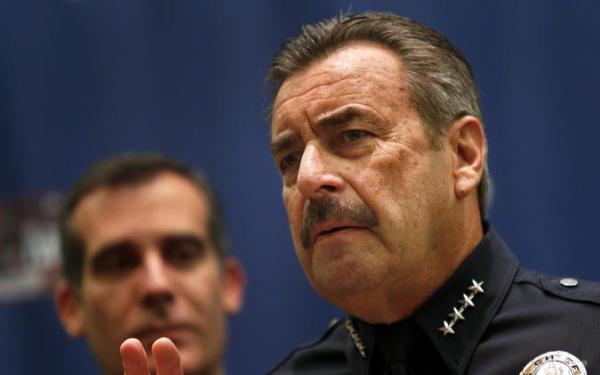 For the first time in more than a decade, overall crime is up in Los Angeles through the first six months of the year, rising by about 12%, according to a Times analysis.

The increase has continued despite the city's efforts to stem the crime surge, which followed consecutive declines since 2003.

Besides homicide -- which was down about 8% -- all other categories of violent and property crime have increased this year compared with the same period last year, according to a Times analysis of LAPD data through June 27.

Violent crime rose 21% -- driven by jumps in aggravated assaults and robberies -- marking the second such increase in a row. The number of shooting victims also rose, by nearly 19%.

The sharp uptick, particularly in violent crimes, has drawn significant attention from top city officials in recent months. Public safety was a keystone of Garcetti’s State of the City address in April, during which he announced plans to double the number of officers who swarm high-crime neighborhoods in an attempt to deter crime.

But the decision to expand the LAPD’s Metropolitan Division raised eyebrows both inside and outside the LAPD. Critics expressed concern that deploying more Metro officers -- an elite squad with a reputation for hard-charging tactics -- could undermine years of progress the department has made in building better relationships with communities.

At the time, Beck stressed that the incoming Metro officers had more progressive training and a different mission from the aggressive operations of the past. The new plan, he said, wasn’t to make more arrests. Instead, the increased officer presence was designed to send a message that the LAPD was nearby and ready to respond.

It is unclear what impact the expansion of the LAPD’s Metropolitan Division has had on the city’s crime rates.

Since late March, the increase in overall crime has retreated somewhat. The slowing trend was most dramatic in aggravated assaults, which rose 27% through late June. Such assaults had increased 39% during the first three months of the year.

The Times analysis found that just over half of the 21 geographic police divisions experienced violent crime increases greater than 20%. Just one division -- West Valley -- reported a decline in violent crime, which includes homicide, rape, robbery and aggravated assault.

Central division, which includes parts of downtown and Chinatown, reported the largest violent crime increase in the city, up 67% from the same period last year. The same division also reported the biggest jump in property crime, up 26%.

Across the city, almost half of the LAPD’s divisions saw double-digit rises in property crime, the analysis showed. The Mission division in the northern San Fernando Valley was the only area to report a decline in that category.

The Los Angeles County Sheriff’s Department reported more modest increases, with a 4.1% uptick in violent crime and a 6.3% increase in property crime through July 6.