Hail a robo-cab, save the planet? Why driverless taxis are good for the environment 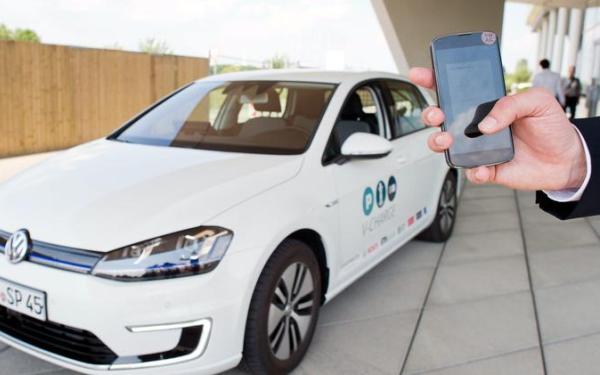 The driverless fleet is coming! In June, a man uses his smartphone to instruct a driverless Volkswagen E-Golf to look for a parking spot.
(Credit: Julian Stratenschulte / European Pressphoto Agency)

If you want to reduce greenhouse gas emissions, consider commuting by robo-cab.

Researchers at the Lawrence Berkeley National Laboratory report that by 2030, traveling by driverless taxi could lower greenhouse gas emissions by as much as 90% compared with the same length ride in a privately-owned gas-powered car today.

Even if you had a more efficient hybrid car of your own in 2030, the researchers calculated that a ride in an autonomous taxi would still reduce per-mile greenhouse emissions by as much as 82%.

The research was published this week in the journal Nature Climate Change.

Driverless taxis may sound like science fiction, but there are good reasons to think they could be commonplace in just 15 years.

According to a report by the Rand Corp., all manufacturers working on cars that can drive themselves plan to release vehicles with semi-autonomous features by 2017.

Autonomous vehicles are expected to be as much as $100,000 more expensive than regular cars, but companies like Lyft or Uber might find it profitable to offer autonomous options.

"Autonomous taxis make a promising early business case for connected and automated vehicles because they spread the purchase cost among many users and match appropriate vehicles to trip needs," wrote Austin Brown of the National Renewable Energy Laboratory in Washington in an article that accompanied the study.

Lawrence Berkeley National Laboratory researchers Jeffery Greenblatt and Samveg Saxena write that much of the reduction in greenhouse gas emissions they expect from robo-cabs would come from matching the size of the car to the needs of the trip. They call it "right-sizing."

"Most trips in the U.S. are taken singly, meaning one- or two-seat cars would satisfy most trips," Greenblatt said in a statement. "That gives us a factor of two savings, since smaller vehicles means reduced energy use and greenhouse gas emissions."

To calculate the amount of greenhouse gases emitted by a two-passenger battery-operated autonomous vehicle of the future, the researchers used the five-seat Nissan Leaf as a reference point. For a two-passenger trip, they imagined a vehicle that was 40% narrower than the Leaf, and that had reductions in mass, power and battery capacity.

The researchers also imagined a single-seat vehicle that would be even smaller for trips with just one rider.

And here's where the dream of the autonomous electric taxi begins to break down.

As Brown points out, the success of robo-cabs to minimize greenhouse gases depends on how they are used by people. For example, small "right-size" vehicles may have to compete with larger and more comfortable cars, including a recent concept car that resembles a living room.

It is also possible that when faced with the choice between taking the most energy-efficient route or the fastest route, robo-cab users may choose the latter.

"The future of transportation energy consumption depends on how the system is used by people," Brown wrote. "And there are reasons to be cautious."