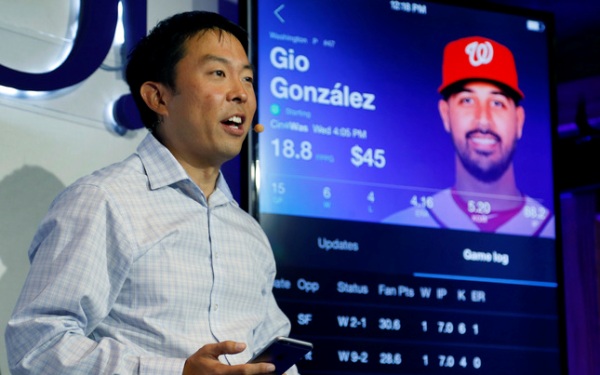 SAN FRANCISCO — Hoping to amp up an American addiction to fantasy sports that already drives legions of sports fans to its websites and mobile apps, Yahoo on Wednesday introduced a more intense, daily form of the virtual sport that allows competitors to compete with real money.

Tens of millions of Americans participate in fantasy sports leagues that allow friends or strangers to act as team owners who trade and draft virtual football, baseball or basketball players over the course of a season. A much smaller segment of users plays daily, but that dedicated group is a growing and lucrative segment that companies such as Yahoo hope to capitalize on.

“The rise of daily is early but real,” Ken Fuchs, Yahoo’s vice president of publisher products, said in a news conference Wednesday where he said the company hopes to help make “fantasy sports a mainstream passion” for sports lovers to “compete, talk smack” and have fun.

The new Yahoo Daily Fantasy product launched on mobile devices Wednesday in 45 states where virtual sports wagering — which Yahoo describes as “contest entry fees,” not gambling — is considered legal, which is every state except for Iowa, Arizona, Louisiana, Washington and Montana. Users can pay up to $600 a day, and Yahoo gets 10 percent of each contest entry fee.

The product now features Major League Baseball teams and players, but will add football, hockey and basketball when those professional seasons begin.

Participation in fantasy sports of all kinds totaled 56.8 million people in 2014, up about 40 percent from 2013, according to a recent survey released by the Fantasy Sports Trade Association.

Sports — not just fantasy leagues but also news and scores — have also been a vital element of Yahoo’s business for many years, and part of the company’s drive to be a portal to the Internet that satisfies users’ daily habits for checking email, scores, news or the weather. The Sunnyvale company has been running fantasy games since 1998.

Months after she took over the company in 2012, CEO Marissa Mayer helped forge a partnership with NBC Sports Group that pairs Yahoo’s tech products and news team with the television brand’s broadcast reach. The combined Yahoo Sports-NBC Sports Network has the second-biggest online audience for sports websites, behind ESPN, according to May figures from comScore. Yahoo announced in June that it will deliver the first global live stream of an NFL game in the upcoming season, reportedly paying more than $10 million to show the Oct. 25 game in London between the Buffalo Bills and Jacksonville Jaguars.

Special Feature
What would sports look like with smaller or no crowds?
466 views

Special Feature
He made most of his gap years: Capehart, 85, gets degree from USC after starting in 1952
347 views

Special Feature
The Pac-12 at a crossroads: morality or money?
1,140 views

Special Feature
Taking in a LAFC game is good for the sporting soul and stomach.
1,637 views