You'll want to cover your eyes: The Gallows has lots of scares 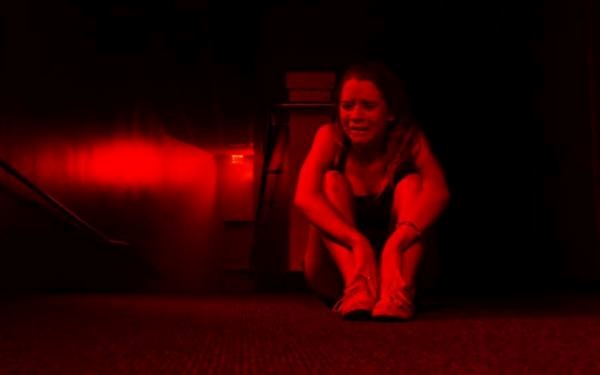 “The Blair Witch Project” released a monster into the film world in 1999. Imitators and filmmakers with about $9 to spend on making a movie embraced the “found-footage” technique that made “Blair” unique.

Unique slowly faded away to common and then to annoying as more and more found-footage movies came out. Now, a film has to earn high points on direction, performances and terror tension to counter the tired familiarity of the genre.

“The Gallows,” a very low-budget movie made by Fresno filmmakers Travis Cluff and Chris Loring, manages to score enough points on the creativity side to balance out the negatives of the recycled format. The novice filmmakers have created a production that artfully builds its scares while managing to get the most out of the format.

The story starts 20 years ago when a high school student is killed during a production of a play called “The Gallows.” Fast forward to the present, when the school is getting ready to produce an anniversary edition of the ill-fated play.

Here is where Cluff and Lofing could have spent a little more time with the story. Even with the found-footage format, there are ways to include background information.

The key to a good horror film is the scares — and “The Gallows” has plenty. But the best scary movies have a thread to tie together the evil that is being presented.

More time should have been spent talking about how difficult it was to get permission to produce the play. Local protests, information from teachers who were at the school at the time or even just a discussion by the actors about why the school board didn’t change the name of the school to Hang ’em High would have given the story a stronger base.

At least the filmmakers have given the film a solid story that just doesn’t end with a scare. Many horror movies have a good start and middle but don’t know how to end. “The Gallows” offers a plausible explanation for what has been happening, while never taking the story out of the depths of the supernatural.

Cluff and Loring manage to get around one of the biggest pitfalls of found-footage movies. Too often, the person keeps filming even in situations where the natural instinct would be to drop the camera and run, which creates forced and faked situations.

Because “The Gallows” is set in a darkened high school — often in the very bowels of the facility — the camera and cellphones are used to create enough light to get around. It’s a bit of a stretch, but it’s not enough to break the tension.

Casting unknown actors is both economical and production smart. Because the four stars aren’t familiar faces, the feel of this being real footage is never compromised. And, the four actors — Reese Mishler, Pfeifer Brown, Ryan Shoos and Cassidy Gifford — sell the terror of the events with great commitment and energy.

Gifford has a solitary moment that has the same tension and terror as the tent scene in “The Blair Witch Project.” It’s the signature moment of the movie.

The combination of a solid story, good acting efforts from the young cast and enough logical use of the hand-held cameras helps “The Gallows” rise above the flat fodder that is often seen in this format.

You can also enter to win a prize for The Gallows.
Enter the Sweepstakes