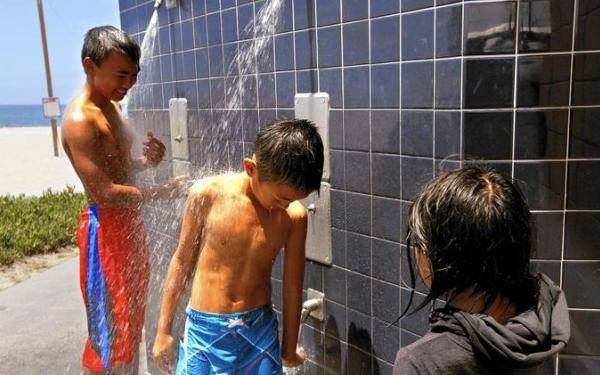 Outdoor showers like this one at Dockweiler State Beach -- being used by Ryanh Morales, left, and his brother Dereck as their sister Sophia stands by -- will be turned off at state beaches on July 15.
(Credit: Genaro Molina / Los Angeles Times)

Thousands of beachgoers will soon feel the drought's impact in the dry shower heads of dozens of state beaches.

State park officials ordered the outdoor showers at 38 state beaches, many of them in Southern California, shut off as of July 15 to conserve water during the drought.

The move is designed to save up to 18 million gallons annually. It will also remove an amenity central to one of summertime's pleasures — washing away the salt and sand under an outdoor shower, the Pacific Ocean just a few yards away.

"They can bring along a gallon jug filled with warm tap water from home, for instance" he said. "A fine-bristled broom is also a terrific way to remove sand from your body."

That kind of talk rankled Sara Israelsson, 22, who said she won't swim in the ocean if she doesn't have the option to shower afterward.

Wrapping her wet long brown hair in a towel after washing the salt water out of it at an outdoor shower at Santa Monica State Beach, she said with a skeptical laugh, "Bring a bottle of water? How big? A tank? That is not a good idea."

The change may not be popular, but every drop counts, said Brian Ketterer, a spokesman for the state parks.

The new restrictions will apply only to outdoor showers, not to indoor campground showers, he said.

On Thursday, beachgoers expressed mixed feelings about news that they would soon lose access to outdoor showers.

At Dockweiler State Beach, just west of Los Angeles International Airport, Justin Velasco, 18, of Santa Clarita grumbled, "Most people live far from the beach, and if they were to sit in a car covered in sand and beach grime for an hour, I think they would get upset."

A few miles to the north, Julianne Sheer shrugged off the state plan as "slightly inconvenient."

"I know it's for the greater good; I'll take a towel and dust off my feet," she said. "It's easy to adjust, and I want to have a lot of water in life."

Brithany Mcginty, who was visiting from Arizona, agreed. "Take your shirt off and dust your feet off," she said. "We are in a drought."

So far, the department's 278 total parks have managed to meet the state's 25% water reduction mandate.

State officials a year ago locked up the 30 public flush toilets at one of California's most popular tourist attractions after its drought-stricken well went dry: Hearst San Simeon State Park, which features the famous castle that has come to symbolize the wealth and power of the Hearst family dynasty.

Portable chemical toilets were parked near the restrooms, which remain open on weekends "to ensure that the plumbing doesn't get all clogged up by not having flowing water running through it," said James Grennan, public safety superintendent for the department's San Luis Obispo Coast district.

Visitors weren't happy with the closure, he said, "but they understood that we're in severe drought conditions calling for drastic measures."

Separately, the California Department of Corrections and Rehabilitation delivered grim news to its 121,000 inmates on Thursday: To save water, the state has turned off open-air showers in prison yards.

"Yes, all showers outside of those in the housing units have been shut down as part of the statewide mandate to reduce water use by 25% due to the drought," said Dana Simas, a spokeswoman for the corrections department.

Prisoners still have access to showers on their cellblocks and can take sponge baths by the sinks in their cells, she said. Even so, lawyers for inmates have included the new restrictions in a class-action lawsuit recently filed in federal court in Oakland.

Back on Santa Monica State Beach, Billy Burk, 23, dried himself off after spending several refreshing minutes under an outdoor shower.

"The drought is a tough situation," he said.