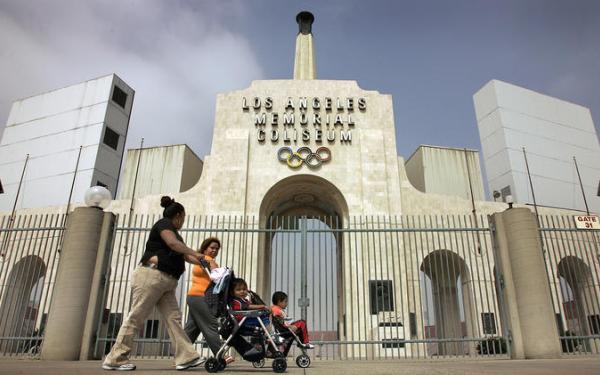 Memorial Coliseum officials will put in a bid with the NFL to become a temporary home to a team relocating to Los Angeles.
(Credit: Al Seib, Los Angeles Times)

It isn't often the nation's No. 1 sports league gets snubbed, but that's what the Rose Bowl Operating Co. did this week in pulling out of the competition to be a temporary home for a relocated NFL franchise.

The RBOC's unanimous decision to not submit a proposal was a stunner, even to the NFL, which made the inquiry.

While the Rose Bowl's withdrawal doesn't imperil the league's possible return to Los Angeles, it markedly narrows the options for a temporary stadium to fill the gap until a permanent venue is constructed at proposed sites in Carson or Inglewood, especially if two teams choose to relocate.

From the NFL's perspective, the complication is significant. It's another hurdle in the already complex challenge of bringing a team — or teams — back to the nation's No. 2 market after 20 years of failed efforts to do so.

The snub also is likely to drive up the asking price of the Coliseum, which along with the Rose Bowl, Dodger Stadium, Angel Stadium and StubHub Center were asked by the NFL to submit bids as a temporary NFL home.

USC, which operates the Coliseum, confirmed Thursday it will submit a proposal to the NFL. But under the terms of USC's lease with the Coliseum Commission, the university can host only one team at the stadium on a temporary basis of up to four years.

"USC will be responding to the NFL's RFP [request for proposal] and we hope to welcome an NFL team into the Coliseum starting in the 2016 season," Todd Dickey, USC's senior vice president for administration, said in a written statement.

The Rose Bowl decision was especially surprising because in 2005, when the venue gave up its bid to be a permanent NFL home, Pasadena funded an environmental impact report to position the Rose Bowl as a temporary site. The RBOC even defended that plan against legal challenges.

RBOC President Victor Gordo said the unanimous decision of the 12-member board was based on their desire to host an annual music and arts festival, which would take place during three days each June. Although that wouldn't conflict with a fall football season, the EIR for that festival — which isn't finished yet — says the stadium can either host the festival or an NFL team in any given year, but not both.

Gordo said the rules were established late last year, when the festival EIR was first proposed to the city. Gordo said neighborhood associations that surround the stadium preferred the music festival and felt pursuing the NFL would be a distraction.

"The board listened [to residents] and found merit in the concern and took an official action to make its position clear ... not to host both the music and arts festival and the NFL. That's now the official policy of the board, and it's included in a binding EIR scoping document."

There is still a possibility the Pasadena City Council could go against the RBOC's recommendation and direct that committee to respond to the EIR. But Gordo, who is also a Pasadena councilman, said he would be surprised if that happened.

Anschutz Entertainment Group, which owns L.A. Live, is a partner in the music and arts festival. This year, AEG pulled the plug on the downtown Farmers Field project and has had a sometimes contentious relationship with the NFL.

"I can assure you that AEG was not involved in any way, nor were they consulted at any point," Gordo said of the decision not to participate in the NFL bidding process.

The major problem now becomes if two teams move to the area. The league would be forced to use an unconventional site such as the 27,000-seat StubHub Center in Carson, or one of the two baseball stadiums. StubHub, home of the Galaxy soccer team, is owned by AEG.

A spokesman for the sports and entertainment conglomerate said Thursday the company hasn't decided whether to bid on hosting a team.

Mark Walter, chief executive of Guggenheim Capital and controlling owner of the Dodgers, said he's unsure of where discussions lie but he would be open to it.

An Angels spokesman wasn't certain of the club's position on the matter.

"StubHub is more realistic than some may believe," he said. "There's something interesting about playing in a smaller facility, to start with creating a scarcity of tickets and increase the level of interest early on. It's part of a complex that's easy to get into. There's space around it to do events and, frankly, AEG knows how to put on events."

It's conceivable the Oakland Raiders, one of three teams connected to the two stadium proposals in the Los Angeles area, could remain at their current home, the O.co Coliseum, if they relocate to Carson.

When the Raiders left Los Angeles for Oakland, the franchise continued to use its El Segundo practice facility during the 1995 season and commuted to games in the Bay Area.

Still, in the wake of the latest snub, the NFL is only emboldened in its belief that, while other markets might bend over backward for the league, L.A. instead is more focused on what it won't do to land a team.

Football
NFC preview: How the Eagles stack up against the rest of the conference
777 views

Football
Austin Proehl, hopes to join his father with a Super Bowl ring, helps out by playing role of Edelman
1,654 views

Football
Rested Rams and recovered Aqib Talib know what it takes down the stretch
2,277 views