In 'Recorded in Hollywood,' Dolphin family's lore crosses over into R&B history 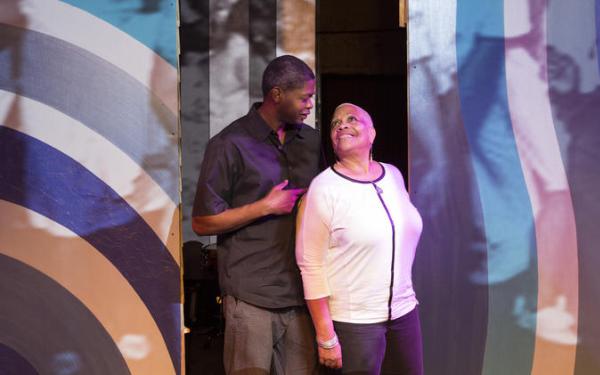 There won't be any need for spoiler alerts if the new musical "Recorded in Hollywood" fulfills its creators' main objective — which is to bring the story of an unusually ambitious and resourceful 1950s Los Angeles music entrepreneur out of obscurity and into the limelight.

For now, consider yourselves warned and proceed no further if you're thinking of seeing the show, playing through July 26 at the Hudson Mainstage Theatre in Hollywood, and want history to surprise you.

"Recorded in Hollywood" exists because Jamelle Dolphin wants to bring his grandfather, John Dolphin, back to life — even though doing that requires showing his shocking death.

Elvis Presley, Sam Cooke and Charles Mingus crossed Dolphin's path. For the past six years, his grandson has worked to spread the story of how and why that came to be, hoping to secure his grandfather's place in music business history.

The musical arose from his 2011 book, "Recorded in Hollywood: The John Dolphin Story," the first of what he hopes will be many iterations of the biography in multiple venues and platforms.

It's a saga of racial segregation being overcome by horizontal integration — the economic term for assembling an array of different but complementary businesses under a single umbrella.

The show begins in the late 1940s with its dapper protagonist eager to open a record shop in Hollywood and name it Dolphin's of Hollywood. He's sure his savvy, energy and charm will lead him to big things amid the rising tide of post-World War II jazz, blues and rhythm and blues that soon would give birth to doo-wop and rock 'n' roll.

The musical dramatizes how an untalented and unstable would-be performer who had a business beef with Dolphin shot him dead in his office in 1958 (future Beach Boys member Bruce Johnston was having a meeting with Dolphin and witnessed the killing). But the show ends affirmatively, with the 18-member cast delivering a zestful rendition of Cooke's soulful ode to music "Having a Party."

Cooke's hit is one of just a handful of off-the-shelf numbers in what's otherwise an all-original score. The composer, Andy Cooper, got involved when Jamelle Dolphin and his producing team envisioned a hip-hop musical. But Cooper, a rapper and record producer in Ugly Duckling, a hip-hop group based in Long Beach, said he vetoed that approach as too anachronistic. Instead, he wrote songs that aim to evoke but not mimic the progression of pop music as it developed through the 1950s.

John Dolphin's store was not, in fact, in Hollywood, but on Central Avenue in the heart of L.A.'s black community. Dolphin, the Alabama-born son of a father who'd been born a slave, had been rebuffed by Hollywood landlords who wouldn't rent to a black man. Not about to let racism thwart him, he gave his store the name he had intended all along, then set about turning it into a unique magnet for white and black record-buyers alike.

The musical's romantic through line follows the bumpy marriage of John and Ruth Dolphin — she kept the shop going for more than 30 years after her husband's murder. The other main current is social history: how the LAPD harassed Dolphin over supposed violations of fire codes, trying to cut off the store's pull on white music fans who were flocking to South L.A. to buy records and hang out with like-minded blacks.

Dolphin's of Hollywood stayed open round the clock, taking advantage of ample middle-of-the-night foot traffic from shift changes at neighboring factories. Dolphin equipped the store with a recording studio and launched a series of record labels to hawk its output, naming the first one Recorded in Hollywood. Its successors included Cash Records and Money Records — names presaging the rap music tradition of not being bashful about one's knack for turning songs into dollars.

The vinyl recorded on his own dime gave Dolphin cheap product that he could use to entice customers with a special offer: Buy any record and get another one free. The catch, Jamelle said, was that the freebie would be one of Dolphin's own releases, which came in blank sleeves, with no cover art.

Still, it was two records for the price of one — and the performers on the Dolphin imprints were no slouches. The output included songs featuring jazz masters Charles Mingus and Buddy Collette and blues and R&B stars Pee Wee Crayton, Memphis Slim, Floyd Dixon and Jimmy Witherspoon. The catalog lives on via compilations on the '50s-oriented British label Ace Records.

Dolphin's master strokes were setting up a radio broadcasting booth in his store's window front and buying time on L.A. radio stations with a white fan base. Dick "Huggy Boy" Hugg, a white DJ, would spin the hits of the day — and, of course, urge listeners to come on down and join the party at Dolphin's of Hollywood. Crayton was commissioned to write a song called "Lovin' John," which became the music mogul's self-chosen nickname.

It wasn't a matter of sexual swagger, Jamelle Dolphin said, although his grandfather was indeed a ladies man who gave his wife heartaches.

"It was saying that he loves his customers, come down to the store and Lovin' John will take care of you. He was all about promoting himself, drawing business and making himself big and popular."

Presley makes a cameo in the play, and Cooke is one of the most important supporting characters. Both had joined a steady procession of 1950s recording stars who certified Dolphin's of Hollywood's clout by stopping by to hobnob with its customers and promote their releases.

Family lore, Jamelle says, includes an episode in which the King made a pilgrimage to Dolphin's home in Leimert Park. There, Elvis' manager, Col. Tom Parker, talked business with the boss while the young singer gravitated to the backyard swimming pool to play with twins Erroll and Jerroll Dolphin — Jamelle's uncle and father, respectively.

As a teenager Jamelle, now 42, worked in the Dolphin's of Hollywood shop, paid in ice cream cones instead of cash. He absorbed many of the stories, although his grandfather's murder was something that Ruth Dolphin and others in the family rarely discussed.

"They were traumatized by it," Jamelle said, and when they see the musical "they always cry. They'd rather talk about how popular he was."

Jamelle, who has day jobs in marketing and real estate sales, said he spent about two years researching his book. He interviewed relatives, family friends and music business figures from the '50s and probed for facts in microfilmed back editions of the Los Angeles Sentinel, the black-owned newspaper whose founder, Leon Washington, closely covered Dolphin's exploits and is a character in the musical.

After self-publishing the book, Jamelle set about turning it into a feature film and recruited television writer Matt Donnelly to help with the script. Soon it dawned on them that a stage musical would be a more feasible, far less costly way to start. Composer Cooper signed on, followed by director Denise Dowse, the only experienced theater artist on the core creative team.

The show has been running in Hollywood since April 11, first at the Lillian Theatre and now at the Hudson. Los Angeles Times reviewer David C. Nichols applauded its "recurring pulse of pure exhilaration with purpose" and concluded that, despite some "new-show quirks," it has a chance to follow the path of "Memphis," a musical about the birth of rock 'n' roll presented at the La Jolla Playhouse in 2008 before rolling on to Broadway success.

Like "Recorded in Hollywood," "Memphis" enlisted a pop musician from another tradition — keyboard player David Bryan of the arena-rock band Bon Jovi — to write original, period-inspired music to bring alive an obscure chapter from 1950s music history in which racial boundaries were breeched despite rampant segregation.

In a recent interview, composer Cooper said he had yet to see the show — having gone on a long European tour with his hip-hop band that began before "Recorded in Hollywood" opened. As a youngster, Cooper said, he'd fallen first for hip-hop, then traced it back to its sources in rhythm and blues.

"What drew me in was John Dolphin seeing the future, seeing that this music would cross over" — just as the rap music of Cooper's 1980s childhood eventually did.

Jamelle Dolphin said that if things progress as he'd like, "Recorded in Hollywood" will move on to larger theaters, with a bigger budget that among other things can augment the current four-member band with a saxophonist and use authentic '50s record sleeves as props instead of the anachronistic grab bag of worn LP jackets discernible at the Hudson. He said scouts from the Pasadena Playhouse and the Montalbán Theater have seen the show. His initial ambition of turning the story into a movie still stands.

The movie, Jamelle said, could take a broader view of the 1950s L.A. music scene than the stage production, which focuses narrowly on Dolphin's of Hollywood and doesn't try to weave in important contemporaries such as bandleader Johnny Otis, who discovered Etta James and Willie Mae "Big Mama" Thornton, and Specialty Records label boss Art Rupe, who unleashed Little Richard on the world.

The unusual family name, Jamelle said, comes from his great-grandfather's determination to transcend slave origins and escape the dangerous racism blacks faced in Beatrice, Ala. Lewis Stallworth, a farmer who had been fathered by a slave owner, packed up and moved the family to the predominantly black enclave of Boley, Okla. En route he noticed signs for Dauphin Island on Alabama's Gulf Coast. Anglicizing the French name to Dolphin, Stallworth broke with his slave past and set the stage, more than 100 years later, for the Dolphin name to appear in lights in Hollywood.

Musical
Summer: The Donna Summer Musical Comes to the Hollywood Pantages from Nov. 5 thru 24!
1,227 views