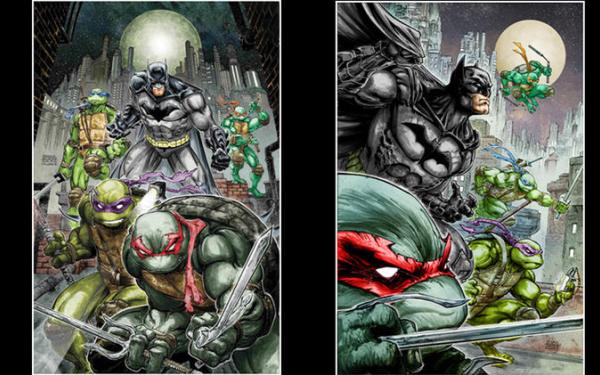 What do Batman and the Teenage Mutant Ninja Turtles have in common? A mastery of martial arts and dedication to rough justice, certainly. A taste for pizza, possibly. Oh, and an upcoming comic book miniseries from IDW Publishing.

The San Diego-based publisher, known for, among other things, creative crossovers, is teaming with DC Comics to bring together the Caped Crusader and those heroes in a half-shell, with No. 1 landing in November, it announced at Comic-Con International during its Friday afternoon panel.

James Tynion IV, one of the architects of the recently concluded weekly DC event series “Batman Eternal,” will script “TMNT / Batman,” with interior and cover art by Freddie E. Williams II (“The Movement”). The writer called it a “literal fanboy dream project” and said that the turtles’ and Batman’s “core drives are all about family. With Batman, it’s the tragedy of what he lost. With the turtles, it’s about the way that coming together makes them stronger.”

The turtles will come to Gotham and face the threat of not being able to return home, Tynion said. Shredder will be the main villain, but some DC villains will also pop up.

That wasn’t the only crossover on the menu: IDW editor in chief Chris Ryall also mentioned a “Street Fighter” / “GI Joe” event coming in early 2016.

Also coming in 2016: New series of the toy-based “Micronauts” and “ROM: The Space Knight.” Marvel had made comics inspired by (but that creatively went far beyond) the toys in the late 1970s and early 1980s, and Ryall had been pursuing bringing those licenses to IDW for years.

Hasbro’s Michael Kelly, with whom IDW works on a number of comic titles, including “Transformers” and “My Little Pony,” co-announced with Ryall, half-jokingly saying the only way to shut him up about those two titles was to give him the rights. Ryall hugged him and colorfully declared, “I’m so … excited.”

“Neuromancer” novelist William Gibson will adapt a never-produced screenplay, “Archangel,” as a comic with co-writer Michael St. John Smith and artist Butch Guice, Ryall announced. It is “a time travel romp,” Gibson said via a statement read aloud by Ryall.

IDW’s “Star Trek” series, set in the reality of the recent J.J. Abrams-directed blockbuster films, will reach its 50th issue with longtime writer Mike Johnson, who also wrote the recent “Star Trek” / Green Lantern crossover, and celebrate with a wraparound cover and a story inspired by the original television series episode “Mirror, Mirror,” in which the Enterprise crew members encounter dark alternate versions of themselves. Tony Shasteen is handling interior and cover art.

The publisher will also launch a miniseries titled “Star Trek: Starfleet Academy,” co-written by Johnson with Ryan Parrott (“Batman: Gates of Gotham”) and featuring interior and cover art by Derek Charm (“Powerpuff Girls Super Smash Up”). Editor Sarah Gaydos said it will try to “capture the magic of Hogwarts or Professor X’s school,” referring to the schools in the Harry Potter and X-Men franchises.

The story involves two crews at different times – James Kirk and company will be seen in the lead-up to the 2009 film’s events, and a new group will be introduced attending the academy close to the time of the upcoming third film in the series. The new crew’s main character, T’laan, is a Vulcan whose first day at the academy was the day her home planet was destroyed in the 2009 film, Johnson said. One of T’laan’s peers appeared to be Andorian in an image projected on the panel room’s screen.

“Judge Dredd: Mega-City Zero” will be written by Ulises Farinas and Erick Freitas, with art by Dan McDaid. Farinas said the series will have a satirical core and address Internet fandoms. “We’re taking away everything that was in Judge Dredd before, taking away all the cities. It’s just him with the wilds and people just going kinda nuts,” Farinas said.

Joe Harris, writer of the recently ended “The X-Files: Season 10,” said “Season 11,” which starts next month, will find Fox Mulder on the run, falsely accused of stealing secrets and apart from Dana Scully. He said the second and third issues will feature the incestuous and deformed Peacock family, whom fans of the television show will recall from the classic Season 4 episode “Home.”

“Locke & Key” artist Gabriel Rodriguez was on hand to talk about the upcoming Audible audio drama version of the Eisner Award-winning horror series that will feature the voices of Haley Joel Osment and Tatiana Maslany. He and Ryall noted that much of the adaptation was recorded not in a studio but in such locations as a supposedly haunted mansion and an abandoned asylum.

The panel didn’t address it (a quirk of time travel, perhaps?), but IDW also has an upcoming four-issue “Back to the Future” series, arriving during the classic film’s 30th anniversary and co-written by original screenwriter Bob Gale with John Barber and Erik Burnham, featuring art by Brent Schoonover and Dan Schoening. IDW had playfully announced the title on Wednesday in a press release written as though it were from after the convention. The four issues will feature ultimately interlocking covers by Schoening.

Special Features
Cybersecurity for everyone: 5 books on defending ourselves in the digital age
1,364 views

Special Features
In his journey from jail to Yale Law, felon-turned-poet writes 'to remember who I am'
791 views