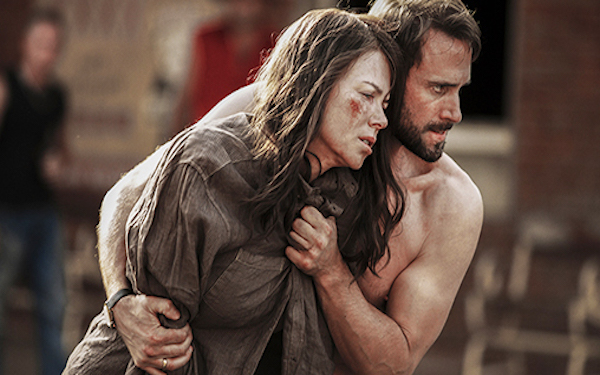 As adolescents, we’re encouraged to explore—to investigate and examine different people, places and variations of our own identities. But all too often that life experimentation can turn into escapism. The awkwardness of youth makes some of us run and hide and we do so with the aid of booze, drugs and meaningless sex. Director Kim Farrant characterizes her young adult life in this way as, “wanting to connect, to feel fully alive, to make love, to fuck, to feel something…anything…” It’s this longing for meaning—and the resulting escapism—that inspired her latest coming-of-age meets dramatic thriller, Strangerland.

Set in the Australian outback, Strangerland tells the tale of a family broken by the eldest daughter’s yearning to rebel and escape from the binds of a structured household. It’s The Virgin Suicides of the sun-beaten desert outpost. It’s here in the scorched earth countryside that the family is forced to settle after Lily (Maddison Brown), a hyper-sexed teen, has an inappropriate relationship with a teacher. Parents Catherine (Nicole Kidman) and Matthew (Joseph Fiennes) bring the family here to start over, with their youngest Tommy (Nicholas Hamilton) in tow as well. The family is aloof in the fictional rural town, having spent their lives in the Australian cityscape capital of Canberra and unable to connect with the simpleton life. But unbeknownst to her parents, Lily still finds ways to connect with the locals in the form of sexual experimentation.

When the two children sneak out after bedtime one night, the family goes up in flames after they never return. The town folk and local detective Rae (a bearded Hugo Weaving) gets involved, blaming everyone for the disappearance from a mentally challenged aboriginal boy to the parents themselves. Kidman shines as a mother under duress, willing to do anything to get her daughter back. She’s cracked bone dry, like the arid landscape they inhabit, convincingly aching and yearning for her two children to return. And her performance is the one thing that saves this movie. Literally the only thing. The rest gets lost in the dust.

Struggling through spates of distress and confusion are just parts of growing up, but these aren’t things one should feel while sitting in a plush red reclining seat. The film has numerous moments that will leave viewers feeling uncomfortable and tense but not in a fun way like a horror flick. For one, Matthew goes on a vicious rampage when things start looking bad for his kids, during which he beats the hell out of the helpless, mentally challenged boy. Among the teeth-grating uneasiness of watching this scene are many other moments mainly dealing with the unattractive sides to sex—underage lust, a one-sided marriage in the bedroom and a beaten, broken down mother walking naked through the streets.

Just like the two lost children presented in the film, Strangerland struggles to find its identity. High school identity crises—phases varying from jock to goth, nerd to beauty queen—are natural in the real world. But for a film to bounce between genres is unsettling. Moments of Strangerland relatable to everyone because they reflect the coming-of-age narrative that everyone personally endures. And then other moments are completely unfamiliar except to a very unfortunate select few—those who have tragically lost their children. Adding to the genre-bending uneasiness are some incredible time-lapse and aerial shots of the bright orange Australian outback. These moments are a much-needed respite in the film, a chance to catch your breath. And if the film played without the grating soundtrack of a horror film, one might wonder if this was a National Geographic special on the rugged desert, mixed with bouts of uncomfortable sex and angry tears.