Disclosure gets ready to shake up EDM. Or maybe just have some cheesecake 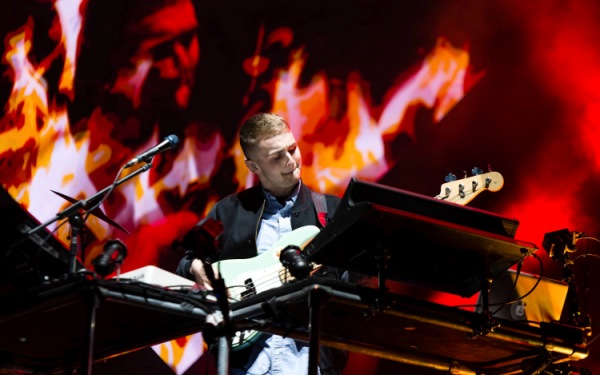 LAS VEGAS — Squeezed into the back seat of an eight-passenger helicopter with several of their mates, Guy and Howard Lawrence of the British dance duo Disclosure took in the sights several thousand feet below them.

There was the Las Vegas Strip, already sparkling as the sun set to the west. There were the squared plots and bright-blue swimming pools of the city’s sprawling suburbs. And in the distance was the Las Vegas Motor Speedway, a giant illuminated Ferris wheel rising from its center. This was their destination, the site of last month’s Electric Daisy Carnival, America’s biggest dance-music festival, where the Lawrence brothers were scheduled to entertain some portion of an estimated 130,000 people gathered to move their bodies in time to an unremitting beat.

To get a feel for the festival, nobody in the chopper had to wait to get there. Piped through the helicopter’s headphones, a nameless DJ breathlessly narrated highlights from a previous EDC. “Make some noise!” he yelled as a four-on-the-floor thump cut through the roar of the blades.

Blending catchy tunes with slick sounds from durable styles like house and U.K. garage, Disclosure is among the prime beneficiaries of the boom over the last few years in electronic dance music, known as EDM. The duo scored a worldwide smash in 2013 with its song “Latch,” which topped Billboard’s dance chart and has been streamed nearly half a billion times on YouTube and Spotify. (The song also helped launched the career of its featured vocalist, eventual Grammy winner Sam Smith.) “Settle,” Disclosure’s debut album, sold 1.6 million copies worldwide according to the group’s label, and its success led to rare back-to-back appearances in 2013 and ‘14 at Coachella, which sometimes feels like America’s second-biggest dance-music festival.

Yet with their highly anticipated follow-up, “Caracal,” the Lawrences are aiming to move beyond EDM. Due from Capitol Records in late September, the album emphasizes the duo’s flair for shapely melodies and thoughtful lyrics more than the rhythmic intensity that keeps the genre running.

“That sound is everywhere now, and every song’s getting a little bit samey — the same old bass lines, the same old samples. We’re a bit bored with it,” Guy, 24, said the day before the duo’s Electric Daisy gig. Reclined on a sofa in a suite at the Delano hotel — not far from Light, the Vegas nightclub where Disclosure holds down a popular monthly residency — he tapped out a simple rhythm on his leg to demonstrate. “I want people to hear this record and think, ‘Wow, they can do more than just a jacking house beat.’ We’ve got a lot more to give.”

Added Howard, 21, seated next to his brother: “I think people will be surprised by this record.”

As they did for “Settle,” the brothers recruited an impressive cast of vocalists to sing on “Caracal,” which will come out just days before Disclosure is to play the Los Angeles Memorial Sports Arena on Sept. 29. On one track, Lorde, who joined the group last year for a performance on the U.K.’s Brit Awards, shows a sultrier side. And there’s another collaboration with Smith, whom Guy called “one of us.”

But where “Settle” complemented the vocal tunes with a handful of instrumental club tracks, this album contains none of the latter. And some of the collaborations break new ground for the group, such as the disc’s lead single, “Holding On,” a gospel-flavored jam featuring the well-regarded soul-jazz singer Gregory Porter.

“These guys are really musicians,” said Porter, who recalled writing the song, a stripped-down ballad in the beginning, around a piano with the Lawrences and their primary songwriting partner, Jimmy Napes. “When my piano player heard the tune, he was like, ‘Hmm, there’s really something going on here,’” Porter continued with a laugh. “He said, ‘I wouldn’t have thought of that.’”

For the Lawrences, focusing on “proper structured songs,” as Howard put it, represents something of a return to their roots.

The brothers grew up in Surrey, outside London, the sons of two former professional musicians: a father who toured Canada with his band and a mother who sang radio jingles and performed on cruise ships. Music was always playing at home — the Beach Boys, Seal, Rush, classic Broadway musicals — and with various instruments around the house, both learned to play at a young age. When Guy was 17, he began going out to clubs and became interested in dance music.

“I’d come back and show Howard all these amazing new sounds that were being made in the U.K.,” he said, referring to then-ascendant styles such as dubstep and U.K. funky. Soon they were tinkering with synths and drum machines and posting tracks they created to MySpace, where they quickly attracted attention from managers and record labels. The duo put out their first single in 2010; three years later, after a string of increasingly buzzed-about EPs, Disclosure released “Settle” to rave reviews and a Grammy nomination for best dance album.

The group’s crafty but exuberant sound attracted the interest of a wide array of artists, including Chic founder Nile Rodgers, who teamed with Disclosure and Smith for a slinky 2013 single called “Together,” and the R&B superstar Usher, who drafted the Lawrences to remix his song “Good Kisser.” Last year, Mary J. Blige added vocals to a new version of the “Settle” highlight “F for You,” which led to the duo co-writing and producing two cuts for Blige’s album “The London Sessions.”

“She can work with anyone she wants, and she wanted to go and work with two white guys from Surrey,” Guy said, visibly moved. “It was amazing.”

These collaborations expanded the possibilities for Disclosure’s upcoming album. “It’s not like we have everyone in the world knocking on our door,” Guy insisted. “But it was pretty crazy the people who were up for it.”

Rather than grab the biggest names available, though, the brothers assembled a mix of well-known artists, some of whom have yet to be announced, and less established up-and-comers, such as Kwabs and Lion Babe. That’s a reflection of their belief that one benefit of success — and one responsibility it carries — is shining a light on emerging talent. But it’s also the result of their determination only to feature singers they could work with in person as opposed to over the Internet, which is how many modern pop records are created. Camped out in their London studio with Napes, who co-wrote “Latch” (as well as several cuts on Smith’s smash “In the Lonely Hour”), the brothers brought in vocalists and together built tunes from scratch.

“That’s not, like, a moral choice,” said Howard, who typically handles melodies while Guy oversees the production. “It’s just because we’re control freaks, and if we sent beats to an artist and they wrote a song and sent it back, we probably wouldn’t like it, no matter who they are.”

Napes said the method was indicative of an attention to detail that distinguishes Disclosure’s music from that of more rudimentary dance acts. “Howard, for instance, has to play the most expensive chord he can play,” he explained with a laugh. “That’s really the best way to describe it. They’re chords that take a lot of time and thought to match whatever the melody’s doing. One note can be wrong and Howard will hear it and go, ‘That’s not right — we need to raise it to this note.’ Then he’ll do it and it’ll make perfect sense.”

That sophistication is easy to hear on “Caracal,” as in one still-untitled track with a handsome vocal by Howard and an elegant ballad that rides a crawling R&B groove. “We’ve slowed down a lot,” Guy said of the album’s tempos, adding that many of the songs approach 100 beats per minute — downright stately by house-music standards. “There’s even a couple 82 bpm.”

Of course, the Lawrences’ growing disinterest in mainstream EDM doesn’t mean they don’t recognize the value in being associated with a scene that practically prints money. And they’re clearly enjoying the spoils of stardom — especially Guy, who in Las Vegas rarely seemed to be far from a throng of admiring young women.

He’s developed an appreciation for luxury items too: In the heliport parking lot as we awaited our ride to Electric Daisy Carnival, he looked over a shiny Lamborghini with an expression that registered not as awe but as sober appraisal. (For his part, Howard said he doesn’t quite understand the fuss over fancy cars.)

At the same time, the brothers exude a goofy charm that underscores how recently they’ve entered the world of high-rolling, bottle-service club bros. Flying back toward the Strip after their festival gig, they cracked each other up by improvising rhymes over Kendrick Lamar’s “Bitch, Don’t Kill My Vibe,” which to their relief had replaced the bludgeoning EDM that had been playing through the helicopter’s headphones.

“The only way in which the boys have changed is that they are even better at what they do,” said Smith, whose rise has closely mirrored Disclosure’s. “Howard still loves cheesecake, and Guy is still in love with cars. It’s just the cars are nicer and the cheesecakes are bigger now,” he added with a laugh.

Also bigger: the expectations. Scott Greer, an executive at Capitol, thinks “Caracal” “raises the bar” for electronic music in the same way that Daft Punk’s Grammy-winning “Random Access Memories” did. “It’s a complex record for the pop mainstream,” he said, one he predicts will be embraced even more broadly than “Latch” was.

Guy and Howard hope Greer is right. But though they’re eagerly monitoring their progress — as when they check how many times an Instagram post announcing Smith’s involvement in “Caracal” has been liked — they’re also trying to take a long view uncommon in the dance world.