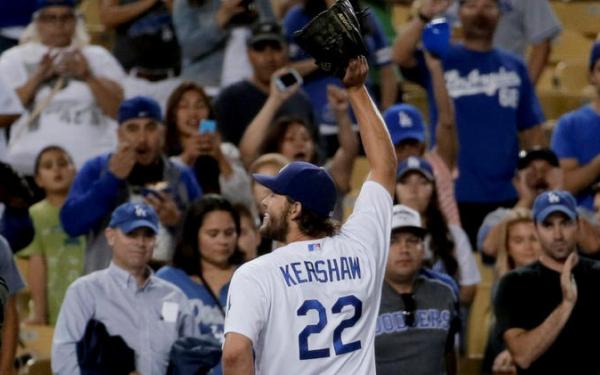 One was for the team's 10-game trip that would start in five days. The other was for Kershaw's upcoming visit to Cincinnati, the site of baseball's All-Star game.

Before the Dodgers' 4-3 victory over the Milwaukee Brewers, Kershaw was named to the National League roster as a replacement for Max Scherzer of the Washington Nationals. Scherzer pitched Sunday, which made him unavailable for the All-Star game Tuesday.

"I said it before: I have no pride in how I get there," Kershaw said. "You get to go to the All-Star game. I don't care if I was the batboy, as long as I get to make it there. It's a special time. You look back on all those, nobody will remember you were a replacement of a replacement that didn't win the fan vote."

The Dodgers, who went into the four-day All-Star break with a 4 1/2-game division lead over the second-place San Francisco Giants, will have five players represent the NL for the first time in 20 years.

One of them, center fielder Joc Pederson, will be the franchise's first rookie position player to start in the game. Pederson was elevated from a reserve Sunday, as Matt Holliday of the St. Louis Cardinals was officially scratched because of a torn quadriceps muscle.

Pederson will also participate in the Home Run Derby on Monday.

Zack Greinke could also start for the NL, especially now that Scherzer is unavailable. Greinke's 1.39 earned-run average is the best in baseball.

Gonzalez, who won the game Sunday with a two-run home run in the eighth inning, will be playing in his fifth All-Star game. Grandal will be in his first.

The Dodgers most recently had five All-Stars in 1995, when they were represented by Mike Piazza, Hideo Nomo, Raul Mondesi, Jose Offerman and Todd Worrell. That team went on to win the NL West, but was swept in a division series by the Cincinnati Reds.

Only this time, the Dodgers will have their manager there as well, as Don Mattingly will be a coach on Giants Manager Bruce Bochy's staff.

Several Dodgers said they were relieved Kershaw would be part of the group.

"He should have been one of the original members selected," catcher A.J. Ellis said. "The way he's thrown the ball, especially these past two months, in my opinion, he should even be a candidate to start the thing. Nobody's been as dominant in our sport as he's been the last four or five seasons, and he's shown the last two months especially, the same guy who won an MVP award is pitching right now."

Kershaw's candidacy probably was impaired by his 6-6 record.

Not only was Kershaw not selected to the original list of pitchers by players or by Bochy, he also failed to win a fan vote for the final place on the NL roster.

Kershaw leads the major leagues with 160 strikeouts. He also has a 2.85 earned-run average.

Asked whether he thought too much was expected of him because of his track record, Kershaw replied, "Expectations are good. People have high expectations for me and rightfully so. I'm here for a long time, they're paying me a lot of money to be good, so I understand that. I welcome those expectations. If that means that being subpar or being average isn't good enough, that's great."

Kershaw also said he was grateful for the support he received in recent days from those who said he should be an All-Star.

"It is cool to see people respect what you do on the field," he said.

Kershaw is now the third Dodgers pitcher to make five consecutive All-Star games. The others were Sandy Koufax and Fernando Valenzuela.

For Kershaw's 5-month-old daughter, Cali Ann, the All-Star experience will be a first.

"Outfits are being picked, as we speak, for the parade," Kershaw said.