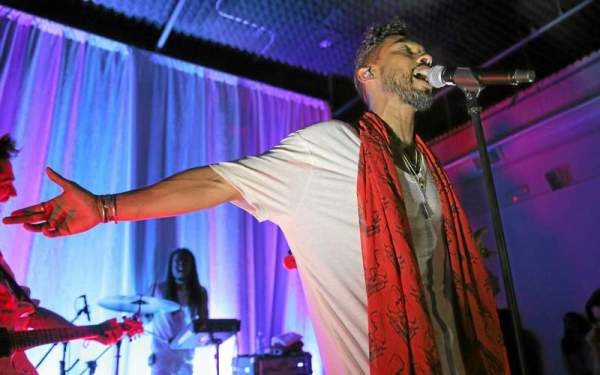 Possibly riding a high off a big cup of “coffee,” Miguel wowed fans during an intimate concert at Sonos Studios in Los Angeles — and the Monday show was his second gig of the night.

The Grammy-winning crooner played a concert for REVOLT, the multi-platform TV network created by Sean “P. Diddy” Combs, at Hollywood & Highland before performing for about 200 fans at Sonos Studio just a few minutes away July 14, and he never missed a beat. Two-stepping, jumping and writhing on floor, Miguel did not waste an inch of the small stage or a minute of his nearly hour-long set. His energy permeated the space adding to the thickness of the summer air, and no one was complaining, especially since that meant Miguel was dripping in sweat so heavily his white shirt almost turned transparent.

“He was amazing, as always. I love everything about him; to his beats to the way he sings, everything about him is the (expletive),” proclaimed 28-year-old Tessa Navarro of Antelope Valley, the lucky fan who took a selfie with Miguel as he performed on stage.

Miguel’s hit-studded set kicked off with “The Thrill” and also included “Adorn,” both off his sophomore album “Kaleidoscope Dream” of 2012.

Of course, he also performed his sexy single “Coffee (In the Morning)” — the clean version — as well as other songs off his latest project, “Wildheart,” like “Face the Sun” (which features Lenny Kravitz on the album), “What’s Normal Anyway” and “Hollywood Dreams.”

The latter two, he explained, are particularly meaningful songs.

“In starting this album, it was really important for there to be a bigger purpose than putting music out,” said the San Pedro native.

Born Miguel Jontel Pimentel to an African American mother and a Mexican American father, the 29-year-old laments how he grew up “Too proper for the black kids/Too black for the Mexicans” in “What’s Normal Anyway.” He explained Monday that the song came from an epiphany where he realized “the worst thing we could do in life is to lead a life trying to please or appease others.”

“I was kind of down — you know how we all can be really hard on ourselves — and I was having a really weird moment, having challenges creatively and on a personal note, and I realized normality is such a subjective thing. Everyone has their own idea of what normal is based on their circumstances and their experiences,” he said. “It was in that moment that I realized that we really can free ourselves from worrying about other people’s perceptions of us if we just take the time to figure out what the (expletive) we stand for, what we believe in, what we’re wiling to sacrifice, what we’re not willing to sacrifice. And that’s what ‘Wildheart’ is all about; it’s about the individual journey of discovering yourself.”

That revelation and the strife he has experienced — as well as the struggles he has seen others experience — also led to “Hollywood Dreams.”

“So many people here in L.A. have lost themselves because they didn’t know the answers to those questions and that’s why I wrote this song,” he revealed, before going into the track.

Those words moved Navarro and her friends, who waited more than three hours to catch the show.

“He’s so talented and his message touches a lot of people. He also seems very humble and that’s so important to me as a listener,” she said.

The Sonos Studio concert, which may be the only time fans can see the rising star in such an intimate setting during his Wildheart Tour, was also presented by Pandora, the Internet music streaming service where Miguel’s station has been played more than a billion times.

“I just want to say, ‘Thank you,’ because you’ve given my message a purpose and a place,” Miguel told the cheering crowd. “I hope more than anything that it inspires you to take a moment in solitude to figure out what it is you really stand for and what you believe in.”

Miguel’s upcoming performances in the Los Angeles area in support of “Wildheart” include a stop at The Majestic Ventura Theater on Aug. 26, Warner Grand Theatre in San Pedro on Sept. 2 and the Hollywood Forever Cemetery on Sept. 4.