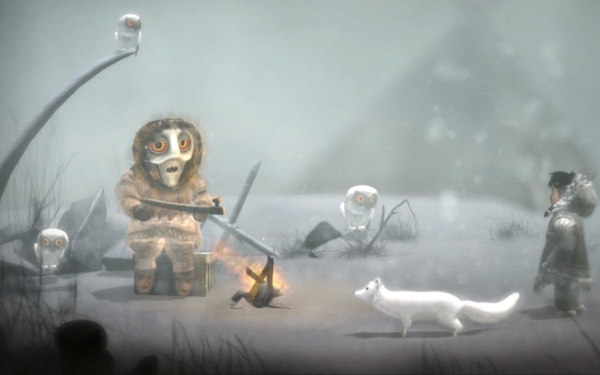 “Never Alone,” the world’s first game developed in and by Native Inuit Alaskans was designed for PC, Xbox One and PS4. Now Aspyr Media has released the game on the Nvidia Shield Android TV complete with all of the environmental effects that make this game unique. Sean Vessy, creative director on “Never Alone” at Aspyr Media, talks about the mobile game in this exclusive interview.

A: It’s an Alaskan Native game and we explore the mythology, the values and the history of the Inuit. They’re based on the North Slope of Alaska. It’s such a pleasure to work directly with community members to bring this game to market. We’re excited to be on the Nvidia Shield. It’s the first time “Never Alone” is going to be completely portable so you can take the adventure anywhere you go.

A: The game features an Inuit girl and her arctic fox. They’re working together but are controllable independently, and they mutually rely on one another. Each has their own unique skills and abilities and they go on a fantastic adventure that explores a mythological story from Inuit culture. It’s the story of an endless blizzard and the pair needs to find the source of the blizzard and restore balance to nature.

Q: What are some of the environments people will explore?

A: We explore the entire range in the North Slope, which includes tundra regions, forests, ice flows and underwater caverns. It’s a romp through every possible environment that exists in Northern Alaska.

Q: What role do weather effects play in this game?

A: There are tons of weather effects. The game’s main character really is this blizzard that comes in all sorts of forms, but it has many layers of depth. I really wanted to get an atmospheric, moody feel for the game and that really comes through on the Shield.

Q: What have you done to optimize this game for Nvdia platforms?

A: We’ve done a number of rendering optimizations to get the game running, but it was quite easy to do. We’re able to feature a game that is comparable in graphical quality to what’s running on the PlayStation 4 complete with the visual effects, transparency, depth of field and all of the effects that we had come to enjoy on the main consoles. We’ve been able to get all that to work on the Shield.

Q: How did you work with Nvidia during the development process?

A: Nvidia has been great. The support we’ve received as an independent developer has been tremendous. They’ve provided hardware, technical support and a lot of guidance as we went through the porting process.

Q: What are your thoughts on the new Nvidia Shield Android TV device?

A: It’s just a fantastic experience for the living room. “Never Alone” has great gameplay, as well as over 40 minutes of cultural insights through documentary film footage told in the voices of people from the North Slope. They talk about things that are in the game, so it’s a really good experience to play with friends and family in a living room experience. Android TV and Nvidia Shield is a perfect vehicle for a game like this.