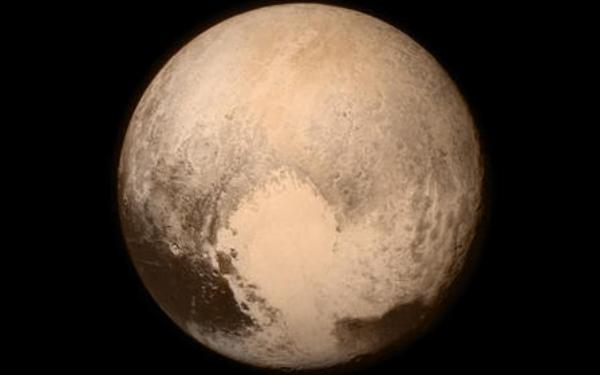 Pluto's "heart" is shown in an image from NASA's New Horizons spacecraft, taken on July 13 when the spacecraft was 476,000 miles from the surface.
(Credit: NASA / APL / SwRI)

Pluto may be a dwarf planet, but it’s got an out-sized heart. Before NASA’s New Horizons spacecraft flew past the icy world, it snapped and sent back this image showcasing the big, bright, heart-shaped feature covering a large part of the surface.

This was the final and most detailed snapshot before New Horizons’ closest approach early Tuesday morning, taken Monday when the spacecraft was a mere 476,000 miles from Pluto. It was captured in black and white using the spacecraft’s Long Range Reconnaissance Imager, or LORRI, and then colorized using lower-res data from the Ralph instrument -- "eyes" of the spacecraft.

The heart had already made an appearance earlier during New Horizons’ approach, but the new image presents the 1,000-mile-wide feature in its full glory. Its left side is more clearly defined, but it’s set off on both sides by much darker material; the surface to the heart’s right seems particularly complex.

The heart itself looks rather plain and featureless -- which is striking, given that plenty of other areas on Pluto are pocked with impact craters that show that the surface hasn’t changed in a while. The relatively featureless heart could be hint at geologic processes that are continuing to refresh the surface.

“This is clearly a world where both geology and atmosphere climatology play a role,” New Horizons principal investigator Alan Stern said in a news briefing Tuesday morning.

After a 9.5-year, 3-billion-mile journey, New Horizons finally flew past Pluto at 4:49 a.m. PDT Tuesday at a speedy 30,800 mph, coming within approximately 7,700 miles of the dwarf planet’s surface. But the New Horizons team at Johns Hopkins University's Applied Physics Laboratory in Maryland will have to wait until about 6:02 p.m. PDT to hear back from the spacecraft.

That’s partly because New Horizons is spending the crucial time studying Pluto before the spacecraft gets too far away to see its target clearly, and partly because the probe is so far away that it takes its transmissions, traveling at the speed of light, about 4.5 hours to get back to Earth. (For comparison, it takes light a little over eight minutes to cross the approximately 93 million miles between us and the Sun.)

“Our data tomorrow [Wednesday] will have 10 times the resolution of what we see today, and it will knock your socks off,” Stern said in a statement.

New Horizons’ closest approach lasted a mere eight minutes, according to an earlier Times report, and it’s quickly zipping away from Pluto now. But that doesn’t mean this is the last we’ve seen of the dwarf planet -- Stern said there was still much that could be learned by sending an orbiter or a lander, though such a mission would be a far more difficult challenge than a flyby.

“I have secretly been working on a lander proposal,” he said at Tuesday morning’s briefing.

Still wish Pluto was a planet? Follow @aminawrite for more science news that's out of this world