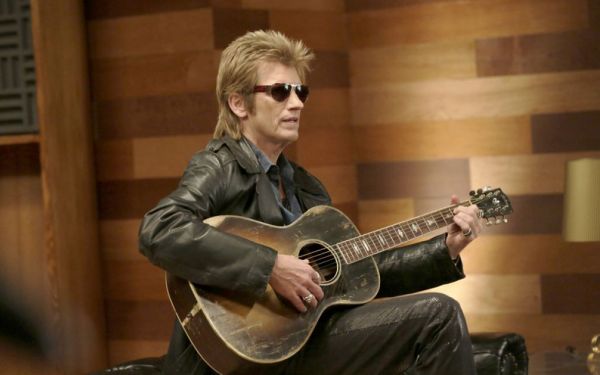 Give Denis Leary credit. He knows how to do "self-destructive" pretty well.

After playing Tommy Gavin, a New York firefighter with loads of personal issues, for seven seasons on "Rescue Me," Leary returns to FX in the new comedy "Sex&Drugs&Rock&Roll." This time, he's Johnny Rock, the washed-up, drug-snorting frontman of a 1990s-era band called The Heathens. Basically, he's Tommy Gavin with an ugly mullet.

The Heathens were a motley, hard-partying crew that lived up to their name, but not their potential. Pegged to be rock's next big thing, they instead imploded, thanks largely to a fiery feud between Johnny and lead guitarist Flash (John Corbett).

These two bickered more than Eddie Van Halen and David Lee Roth (or Steven Tyler and Joe Perry, or any other combative rock duo you can think of). The breakup point came when Johnny slept with Flash's wife on the day the band's debut album dropped. Awkward.

Twenty-five years later, Flash makes decent money as a hired guitar gun on live tours for the likes of Madonna and Lady Gaga. Meanwhile, bad boy Johnny, still stuck with that mullet, is out of work and out of money and can't get a gig to save his life. That's partially because he won't lower himself to lead a corny tribute band (Jon Non Jovi?) and partially because, even though he's only 50, he's "175 in cocaine years."

Thursday's premiere episode, shot in faux documentary style, retraces The Heathens' brief, turbulent history, with input from the likes of Dave Grohl and Afghan Whigs frontman Greg Dulli. Then, it follows Johnny as he makes a desperate move to get the band back together -- a reunion spurred by the sudden appearance of his 21-year-old daughter, Gigi, played by the magnetic Liz Gillies.

Gigi, it seems, isn't so much interested in reconnecting with her long-lost father -- although that would be cool -- as she is in achieving fame. A singer with some glorious pipes, she grew up listening to that one-and-only Heathens record. Now, she wants to capture that super 1990s sound and dress it up inside a fresh new voice, and she's counting on Daddy's dysfunctional band to help.

Fair warning: Leary's fingerprints are all over "Sex&Drugs&Rock&Roll." He not only headlines the show, he's also writing and directing and producing it. Thus, it's brimming with his brand of edgy, often profane humor (the opener includes a below-the-belt reference to Bruce Jenner). If you're a Leary fan, you'll be pleased. If not, you should probably move on. "Sex&Drugs&-Rock&Roll" is also stuffed with the kind of dinosaur-rock cliches we've all seen in similar projects. Johnny, for example, is convinced that he can't find his muse without chemical assistance.

But these rock cliches still pack a comedic punch because, well, they're just so outlandish and evocative. The key is to bring some fresh twists to them, and for the most part, Leary's bunch succeeds in doing so.

But can Johnny Rock succeed in recapturing some, or all, of that lost '90s mojo? We're not counting on it happening any time soon, if ever.

CHANNEL SURFING: "Sex&Drugs&Rock&Roll" premieres just ahead of the Season 2 premiere of "Married" (10:30 p.m. Thursday, FX), the amusing sitcom that captures the domestic angst of Russ and Lina Bowman (Nat Faxon and Judy Greer).

The season kicks off with a Thanksgiving feast that you just know won't go well.

Saturday brings the return of the Western period drama "Hell on Wheels" (9 p.m., AMC), and there's still a lot of working on the railroad to be done. The saga now finds Cullen Bohannon (Anson Mount) in the town of Truckee, where he's leading the brutal effort to tunnel through the Sierra Nevada.

This fifth and final season of "Hell on Wheels" will be split in half, with seven episodes airing this summer and the remaining seven arriving next year.

For a big blast of splashy fun, be advised that next week brings "Sharknado 3: Oh Hell No!" (9 p.m. July 22, Syfy). This time the entire East Coast in endangered when shark-infested storms plague Washington, D.C., and Orlando.

The usual suspects are back for more cheesy absurdity, including Ian Ziering and Tara Reid (Antioch native Anthony C. Ferrante again directs). They're joined by David Hasselhoff and Bo Derek.