Mike Trout shines as only he can, is MVP of AL's 6-3 All-Star win 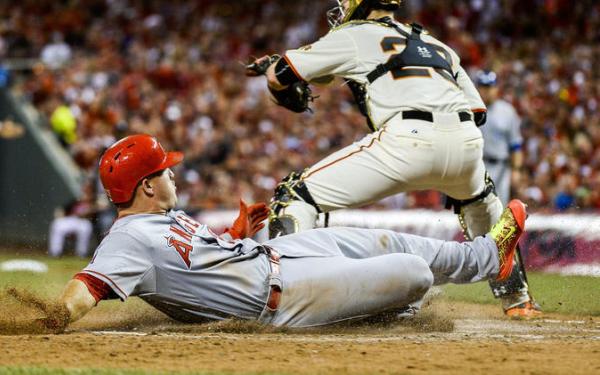 We see the greatness of Mike Trout every day. We forget how seldom so much history is made by someone so young.

Trout reminded us of his youth late Tuesday night. He sat in the corner of a cramped room, waiting for Kansas City Royals Manager Ned Yost to finish his news conference. Trout did not sit and stare. He pulled out his cellphone, scrolled to check what he said were 65 messages, texted a few replies, glanced up and smiled when Yost praised him, looked back down at his phone.

Trout is 23. This is what a 23-year-old does when he is waiting for the movie to start, for the waiter to deliver dinner to his table or, in his case, for his turn to discuss his incredible feats with hundreds of reporters.

When he did, the Angels star talked about the pregame ceremonies honoring Hank Aaron, Johnny Bench, Sandy Koufax and Willie Mays as baseball's four greatest living players. To Trout, that fantastic four might as well have played in the era of black-and-white television.

"It's awesome to see guys like that," Trout said. "Growing up, I didn't get to see them play that much, because I'm a young guy."

Half a century from now, Trout could be the guy walking slowly out to the mound in a celebratory fluorescent blazer, the highlights from days like Tuesday shown as a future generation of stars applauds the Hall of Famer.

"Let's not jinx it," Albert Pujols said. "Hopefully, he can stay healthy. He is a special player."

Not to say he is young, but Andrew Heaney, a promising Angels rookie, won his first major league game 16 days ago. Trout is two months younger than Heaney.

This game, as Tom Lasorda liked to say, is not that bleeping easy. But, before the game, Pujols told Trout to start the game by going deep on the first pitch, to the opposite field.

"I was telling myself I was going to swing," Trout said, "but I rarely swing at the first pitch."

The pitcher was the Dodgers' Zack Greinke, who had not given up a run in 36 innings. On the fourth pitch, Trout hit a home run — to the opposite field.

"He actually waited to hit it out," Pujols laughed.

"I wish he was still my teammate," said Greinke, who pitched for the Angels in 2012, Trout's rookie-of-the-year season. "I think he's the perfect position-player teammate and [Clayton] Kershaw is the perfect pitching teammate."

No one had led off the All-Star game with a home run since 1989, when Bo Jackson did it at Anaheim Stadium.

In the fifth inning, against Kershaw, Trout hit what appeared to be a double-play ball. Kershaw said he thought he had the double play. But Trout hustled to beat the throw at first, and eventually scored the run that put the AL ahead for good, pinning Kershaw with the loss.

Yost let Trout bat once more, and he walked. In 12 All-Star plate appearances, he has reached base seven times — five hits, two walks.

"It's the best pitching in the world," Frazier said. "Not everybody is Mike Trout."

Good on Yost for giving the people what they wanted, and for letting Trout become the first All-Star in eight years to bat four times in a game.

After the game, Angels pitcher Hector Santiago stood in the AL clubhouse, a wide grin on his face and an enormous cardboard box at his feet. Santiago is a huge memorabilia collector, and he had goodies coming from Trout.

"I try to get as much stuff as I can from him. He gets abused," Santiago said. "But he gave me a bat, and he's going to put 'two-time All-Star MVP' on it."

Santiago did his best to put Trout's excellence into words, to explain how he could be so much better than the rest of the best players in baseball.

"He is in his super prime, like Albert used to be," Santiago said.

Santiago paused, not meaning to slight Pujols. "Albert is still in his prime," he said. "He still leads the league in home runs."

He used to be the best player in baseball.

"Trout," said Santiago, "has taken over that role."