With accidents aplenty on the Pacific Coast Highway, safety improvements get the OK 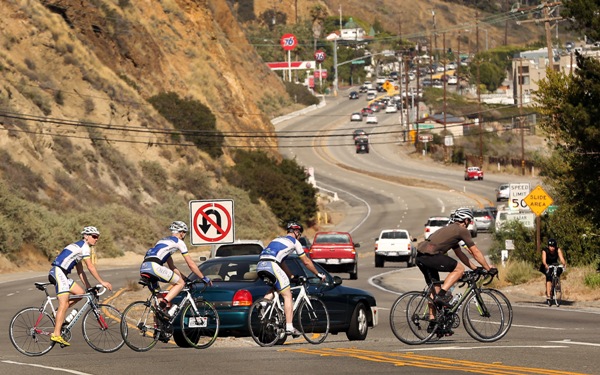 The Malibu portion of PCH is known for problems with speeding, weaving, vehicles parked along side of highway, jaywalking pedestrians and bicyclists.
(Credit: Al Seib / Los Angeles Times)

LOS ANGELES — One of the world’s most scenic and celebrated ribbons of asphalt, Pacific Coast Highway has served as mood-setting backdrop to films and TV shows and inspired lyrics by artists of such diverse sensibilities as the Beach Boys, Jaden Smith and Hole.

For 21 miles northwest of L.A., the fragmented, 650-mile road becomes the city of Malibu’s main thoroughfare. And almost daily the squawk of gulls and thump of waves are drowned out on this stretch by shrieking brakes, crumpling metal and sirens’ wail as accidents send people to hospitals and bring traffic to hourslong standstills.

Now Malibu is embarking on a wide-ranging effort to improve safety. In June, the City Council voted to adopt a safety study that proposes 120 projects small and large to make the curvy road less hazardous; the traffic consultants who prepared the report also alerted the California Department of Transportation to 30 other fixes needing quick action, such as replacing missing signs or pruning overgrown plants.

Many local residents say the changes can’t come too soon.

“I get very impatient for safety improvement on this highway,” Meril May, a Malibu real estate agent and public safety commissioner, said at the council meeting. “We need to improve (it) as fast as possible.”

In the three years ending in December, 376 people suffered injuries and nine people — including six pedestrians — died in accidents involving vehicles on PCH in Malibu, according to the safety report.

As of June, four people had died in 117 accidents in 2015 along the Malibu portion of PCH, according to the Los Angeles County Sheriff’s Department.

One of those fatalities happened last month as Dewayne Coleman, a Los Angeles rapper known as MC Supreme, sat with his girlfriend in his legally parked compact car on the seaward shoulder of Pacific Coast Highway on a foggy morning.

They were enjoying the moist salt air and ocean view when, at 6:22, a pickup truck barreled into them, toppling their car and pushing it to the lip of an embankment above the beach. Coleman, 47, died instantly and his girlfriend was injured.

Just a few feet away, in February, Bruce (now Caitlyn) Jenner crashed his SUV into the back of a Lexus that had stopped in heavy traffic, pushing it into the path of an oncoming Hummer. The 69-year-old female Lexus driver died at the scene.

Part of Malibu’s problem, most planners and locals agree, is the unusual mix of uses and users along the stretch: commuters, tourists, surfers, workers and parents ferrying kids to soccer practice or school.

Attention drifts from sunsets to cellphones to celebrity mansions, while pedestrians with ice chests dart through traffic, bicyclists whiz by, body boarders whip U-turns to nab prized parking spots on the highway’s shoulders and hungry diners edge into the parking lots of Nobu, Duke’s and Moonshadows.

Driving on PCH “is kind of like taking a left turn out of your driveway onto the 405,” said Peter Mullin, a collector of French Art Deco autos who navigates the highway as he commutes between Los Angeles and his Oxnard car museum.

Rock Miller, a traffic engineer with Stantec, who presented the safety report to the Malibu council, blamed some of the mayhem on speeding and said a high proportion of the accidents happen at or near traffic signals or are collisions involving parked cars.

The report recommends bike lanes and raised medians, additional pedestrian crosswalks and designated underpasses. Miller raised the possibility of a state-of-the-art traffic-signal timing system that could be adjusted for real-time conditions. The existing system was built piecemeal, and engineers must manually change signal times at many intersections.

Pedestrian-activated flashing lights at crosswalks are also on the list, as is lane narrowing in the city’s western end to encourage vehicles to slow down.

The report suggests that the projected $20 million cost of the improvements could be funded by the countywide Measure R sales tax or by federal and state grants.

The parking issue is particularly problematic because of the road’s inherent geographic constraints.

Malibu and Caltrans recently widened the shoulder and opened a dedicated bike lane on the ocean side along Zuma Beach. Miller said that approach might be possible in some other areas.

“There’s only so much room to enlarge it,” said Capt. Patrick S. Davoren of the Sheriff’s Department’s Malibu/Lost Hills station. “We can’t move the ocean, and we can’t move the mountains.”

Any safety improvements would be bittersweet for Michel Shane.

His 13-year-old daughter, Emily, was killed on the highway five years ago as she walked to meet him at the shopping center on Heathercliff Road, a route local kids take often. The motorist who drove off the road and struck her was convicted of second-degree murder.

Shane is producing a documentary — called “PCH: Probably. Cause. Harm.” — that he said “will be a horror film based on reality.”

Local News
New California law will redefine who is an employee. What does it mean for workers and businesses?
733 views