Nick Lachey surprises Lay's "Do Us A Flavor" finalists 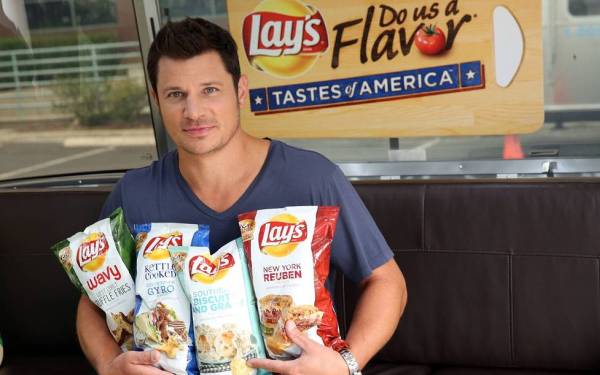 Four of America’s favorite local dishes are about to take center stage … in the potato chip aisle. Out of millions of submissions from fans across America, Lay’s, one of the marquee brands from PepsiCo’s Frito-Lay division, today announced the four finalist flavors competing for a $1 million grand prize in the Lay’s “Do Us A Flavor” contest: Lay’s Wavy West Coast Truffle Fries, Lay’s Southern Biscuits and Gravy, Lay’s New York Reuben and Lay’s Kettle Cooked Greektown Gyro flavored potato chips. Representing four of the most flavorful cities and towns across the country, these four finalist flavors are set to make their debut on store shelves nationwide later this month with consumer votes determining the grand prize winner.

The four finalists — Angie Fu from Irvine, Calif., who submitted West Coast Truffle Fries; Hailey Green from Noblesville, Ind., who submitted Southern Biscuits and Gravy; Jeff Solensky from DuBois, Penn., who submitted New York Reuben; and James Wagner from Wichita Falls, Texas, who submitted Greektown Gyro — learned they were contest finalists in the most incredible way: when TV personality and multi-platinum recording artist Nick Lachey surprised them at their doorsteps with the big news.

No stranger to delicious flavors, Lachey has traveled the country performing for millions and experiencing local dishes along the way. He’s also co-owner of Lachey’s, a sports bar located in his hometown of Cincinnati known for offering up a local twist on traditional American recipes. Beyond his passion for great food and local fare, Lachey also has been part of some of television’s most life-changing moments as the host of NBC’s highly rated a capella competition show “The Sing Off.”

“It’s not every day you get to travel around the country surprising fans with the news they’ve got a one-in-four shot at a life-changing million dollar contest grand prize,” said Lachey about the experience. “And what I quickly learned is that behind every delicious finalist flavor, there’s an even more delicious backstory. It’s been a thrill so far, and I can’t wait to return in October to help crown a winner.”

From July 27 through October 18, consumers can vote once per day per person/device/platform for their favorite finalist flavor on DoUsAFlavor.com; via Twitter and Instagram using the hashtags #VoteTruffleFries, #VoteBiscuits, #VoteReuben, or #VoteGyro; and/or via text message by texting “VoteTruffleFries,” “VoteBiscuits,” “VoteReuben,” or “VoteGyro” to 24477 (CHIPS). The winning flavor will be revealed this October and will remain on store shelves following the completion of the contest.

“From a New York deli, to a local Greek hot spot, to grandma’s kitchen, to hideaways along the West Coast — this year’s finalists were inspired by some of the most flavorful places in America,” said Jeff Klein, vice president of marketing, Frito-Lay, North America. “It’s now in the hands of potato chip lovers across the country to determine our ‘Do Us A Flavor’ winner – we can’t wait to see which favor comes out on top.”

About the Finalists
To submit a flavor idea for the “Do Us A Flavor” contest, fans were asked to provide their name, flavor name, up to three ingredients, the chip style, the city and state that inspired their submission and a brief description or inspiration story for their flavor. In alphabetical order by last name, the finalists are:

· Lay’s Wavy West Coast Truffle Fries: Angie Fu, a native Californian, has had a passion for food and discovering local flavors from an early age. She very nearly went into culinary school, but instead opted to keep her love of flavor a hobby. When Angie is home, she is constantly in her kitchen, trying her hand at new dishes and sauces. But when Angie goes out to eat, she can’t say no to truffle fries, even seeking out restaurants in the area that put their own local twist on her favorite side.

· Lay’s Southern Biscuits and Gravy: As a travel agent, Hailey Green has many opportunities to sample local flavors when exploring a new city. She has a great appreciation for each locale’s “homemade style,” because it reminds her of her own childhood, filled with memories of eating southern food in her grandmother’s kitchen. One of Hailey’s favorite dishes is biscuits and gravy — a recipe that was handed down in her family generation after generation. Not surprisingly, this family-favorite also inspired her potentially million-dollar winning potato chip idea.

· Lay’s New York Reuben: Jeff Solensky helps manage a local restaurant in DuBois, Penn., where he pursues his true passion in life — food. Growing up in Long Island, N.Y., Jeff has fond memories of traveling into Manhattan to enjoy Broadway shows with his mother. A big part of that tradition was stopping by popular New York delis beforehand to enjoy signature, mouth-watering Reubens. Inspired by the delicious Reuben sandwiches of his childhood, Jeff came up with the idea to infuse those same flavors into a potato chip.

· Lay’s Kettle Cooked Greektown Gyro: James Wagner has been in the Air Force for more than 18 years, traveling the country and abroad, and discovering local tastes at each stop on his journey. While abroad, James discovered his fondness for Greek cuisine, so when he moved to Wichita Falls, Texas, he immediately sought out the closest gyro specialty restaurant. As it turns out, there is one right outside the Air Force base gate. His flavor inspiration comes from his regular visits to that restaurant.

About the Contest
PepsiCo has held “Do Us A Flavor” contests in numerous countries with consumers suggesting millions of ideas for chips flavors around the world. In July 2012, the Lay’s brand launched its first “Do Us A Flavor” contest in the U.S., which resulted in Lay’s Cheesy Garlic Bread submitted by Karen Weber-Mendham, a children’s librarian from Land O’Lakes, Wis., being selected as the first million-dollar winner. The contest returned to the U.S. for a second time in January 2014 with Lay’s Kettle Cooked Wasabi Ginger, submitted by Meneko Spigner McBeth of Deptford, N.J., crowned the winner.

As part of this year’s contest, a judging panel made up of chefs, foodies and flavor experts narrowed down the contest submissions to four finalist flavors. The three runner-up finalists will each win $50,000 in prize money, with the grand prize winner taking home $1 million or one percent of their flavor’s net sales through July 15, 2016 (whichever is higher). More details and official contest rules are available at DoUsAFlavor.com.