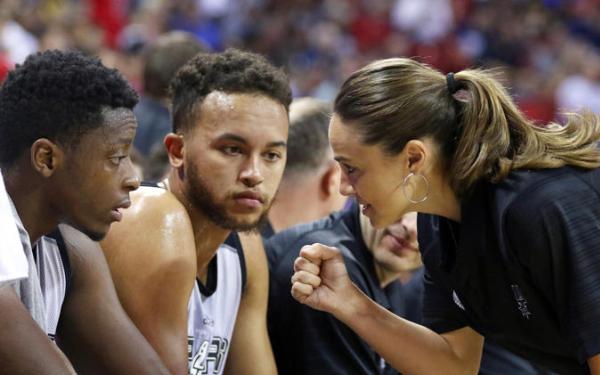 Her team was down a basket in the final seconds. She called a timeout, drew up a play and it almost worked. Guard Jarell Eddie had an open look, but he missed a three-point shot that would have tied the score against the New York Knicks' squad Saturday.

Hammon maintained a stoic demeanor for four quarters, leaving the bench only to call timeouts or offer words of encouragement. And then her first game as a head coach was over. It was also the first time a woman served as the head coach of an NBA summer league team.

"I actually didn't think it was going to be as big a deal as it turned out being," Hammon told The Times. "To me, it was just a great opportunity, a great responsibility, and just a great gesture of trust with Pop [Gregg Popovich] that he would put me in charge of helping develop our guys, helping get our system in place, and just giving me that experience."

Losing that opener bothered her, though.

"After that first game, I didn't sleep the next night because I'm thinking about everything that I could've done differently or just things that I could do better to help our guys," Hammon said. "I was surprised that first game how it did get my competitive spirit going. It was intense in a different way. In a lot of ways, it was more challenging as a coach than being a player."

Hammon is cognizant of the interest in her coaching career and she keeps fielding the same questions, while also trying to keep her roster focused on the task at hand.

"I want to go and do my job and I want to do it well," she said. "Because the guys are working really hard for me and trying to do the right thing and play the right way. That's a lot to ask a group of young guys who are all out trying to get contracts for themselves."

Hammon, 38, was raised in South Dakota and took to basketball at an early age, becoming a star in high school.

"I grew up in the woods; we were either on three-wheelers or four-wheelers or we were playing basketball," Hammon told USA Today.

A 5-foot-7 point guard, she wasn't heavily recruited, eventually playing for Colorado State, where she had a stellar career, guiding the Rams to three NCAA tournament appearances. Hammon wasn't selected in the WNBA draft, but she was given a chance with the New York Liberty in 1999 and soon became one of the best players in the league. In 16 seasons, including eight with the San Antonio Silver Stars, Hammon was a six-time All-Star.

When Hammon tore a knee ligament in 2013, her post-career path began to take shape. She hadn't really considered coaching, but joined the Spurs as an unpaid assistant during her rehab.

Spurs Coach Popovich took a liking to Hammon and was impressed by her expertise. After her final WNBA season, the Spurs offered Hammon a position in August 2014, becoming the first woman to be a full-time assistant in the NBA.

"It's as if Henry Ford came back to somebody and said 'Hey, let me teach you how to make cars.' Anybody who doesn't jump on that opportunity would be crazy," Hammon said.

Hammon believes her time as a point guard has aided her transition from the court to the bench.

"As a point guard, you're constantly directing, constantly trying to get guys into the right spots. You're communicating all the time, and that's really been beneficial to me," she said.

Before Saturday's game, the crowd at the Thomas & Mack Center greeted gangly Knicks rookie Kristaps Porzingis with a loud ovation during introductions. The next name called, Hammon's, was given the same modest round of applause other coaches received.

When New York jumped to a 13-2 lead, Hammon called a timeout and gave the Knicks some different defensive looks, including some full-court man to man. The Spurs clamped down on defense, holding New York to five points for the remaining 5 minutes 50 seconds of the quarter.

After the game, Hammon took on a barrage of topics, including the importance of women holding key jobs in men's basketball.

"I just think it's important for society that women be rewarded for their brains just as much as any guy," Hammon said. "To me, it's always about the bigger picture. We want to make sure that if your wife or your daughter goes in for a job interview, she goes in with the same opportunity that a guy gets."

And then she was on to the next game.