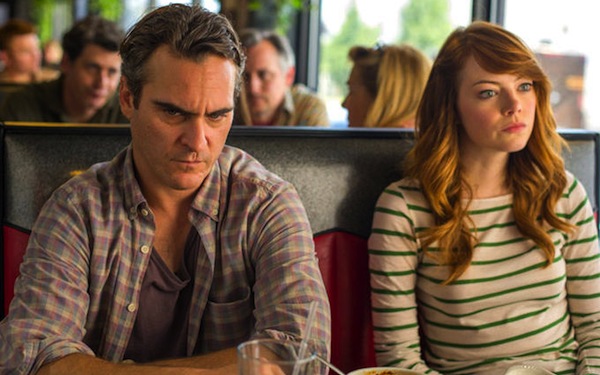 By now, we are all probably familiar with the ways of Woody Allen. Over the past half century, the man has been creating some of the most iconic pieces of cinema, and at a staggering rate, so it’s really no wonder that he’s become one of the surest auteurs out there. That also means he is bound to make some missteps in the scramble to average almost a film each year, because, hey, he’s only human, and we cannot hold anyone to strict standards of perfection. That being said, when certain films come along and fall somewhere in between his catalogue of masterpieces and major flops, they simply become forgettable, and unfortunately that may be the fate of Irrational Man.

Adhering to the template that many of his films fall into, Irrational Man is a story about a man facing an existential crisis that drives him into a pit of despair. This man is Abe Lucas (Joaquin Phoenix), a philosophy professor renowned for his controversial ideas and even more controversial affairs with his young students. So when he comes to the quiet town of Newport, Rhode Island to teach at the fictional Braylin College, teachers and students alike are all in a tizzy to see what this brilliant and broken thinker will bring to the table.

From the get-go we can already assume that the whole affair with a student thing is going to play out in the forefront, seeing as its one of the driving tropes of Woody Allen’s career and, ahem, personal life. These suspicions are quickly confirmed when a charismatic and rather doe-eyed student Jill (Emma Stone) proves to have a special knack for philosophy, stimulating Abe’s conversational interest. Any romantic notions are quickly cast aside by both parties—Jill for the reason that she has a loyal boyfriend, and Abe because an unhappily married science professor Rita (Parker Posey) is there to satisfy his more carnal pleasures of life. Naturally, that doesn’t last too long.

Irrational Man's first half is where the big problems lie, providing little in-depth conversation about the greater philosophical questions that Abe brings up and quickly brushes over. Instead, Allen’s script focuses on the more trivial interactions with Jill that really don’t hold much weight, which is an issue seeing as they are supposed to share an intellectual bond that ought to drive the film. Knowing that Allen is deeply motivated by philosophical thinking, an idea that flows through most of his films, it’s simply surprising that this one, which grapples directly with issues of philosophy, does so in a marginal way.

This first act is also riddled with rather odd editing choices by Alisa Lepselter, who has worked on many of his recent hits like Blue Jasmine and Midnight in Paris. Integrating way too many fade-in transitions within the same scene start to give Irrational Man a lazy feel about it, especially mixed with the rather hazy cinematography, prompting the viewer to start daydreaming at any moment.

All this said, however, Allen creates a startling change of pace pretty much exactly at the midway point that manages to save the day. Sitting at a café, Abe and Jill overhear a woman crying that a judge is going to take away custody of her two children, despite all reason, and for Abe this is his calling—to make an honest difference in the world where words and teaching can only go so far. To murder this judge would be to rid the world of an evil that would directly benefit another human being. It just needs to be executed in the right way.

It’s at this point when the momentum actually becomes momentum, and Irrational Man becomes an engaging affair. Joaquin Phoenix (Her, Gladiator) as the depressed drunkard turned man with a purpose is pretty spot on, seeing as he exudes a natural complexity into all of his works. Unfortunately, Emma Stone (Birdman) doesn’t seem to shine as she usually does, arguably held back by one of Allen’s more tepid scripts. What’s truly a shame is that Parker Posey (Best in Show) as the sex-crazed science professor doesn’t get more screen time, because she brings something offbeat, something refreshing in an otherwise stale on-screen environment.

So, yes, there’s a lot to be scrutinized, and yes, it may be forgotten in a couple years time in his massive body of work, but still, Irrational Man shows enough Allen-esque panache in the second half—with a rather satisfying ending—that it warrants a look from his most loyal fans.

IRRATIONAL MAN comes to The Landmark and other select theaters on Friday, July 17th.