Tennessee shootings, which kill 4 Marines, to be investigated as terrorist attack 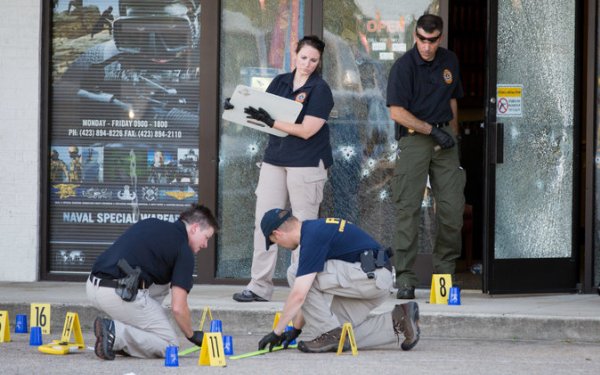 A gunman opened fire on two military centers more than seven miles apart on Thursday, killing four Marines and wounding three other people in what authorities are investigating as a terrorist attack.

A police officer was among those injured in the brazen daylight shooting, in which a man identified by federal authorities as Mohammod Youssuf Abdulazeez, 24, sprayed dozens of bullets at a military recruiting center, then drove to a Navy-Marine training facility and opened fire again before he was killed.

“It is incomprehensible to see what happened and the way that individuals who proudly serve our country were treated,” said Chattanooga Mayor Andy Berke. “Today was a nightmare for the city of Chattanooga.”

The killings coincided with this week's end of the Muslim holy month of Ramadan, a time when Islamic extremists have targeted rival sects in past years and militants have sought to strike symbolic blows against Western enemies. This year, supporters of the militant group Islamic State called via social media at the start of Ramadan for “lone wolf” attacks against perceived enemies of their global holy war.

But authorities emphasized that they had established no motive for the attacks.

“We are looking at every possible avenue, whether it was terrorism — whether it was domestic, international — or whether it was a simple criminal act,” Ed Reinhold, special agent in charge of the FBI office in Knoxville, Tenn., told reporters.

At a late-night news conference, Reinhold said authorities had no leads that tie into an international terrorist organization. “There is no indication at this point that anyone else was involved,” he said.

Nor have authorities determined how Abdulazeez died, Reinhold said. An autopsy will be conducted over the weekend.

Abdulazeez, believed to have been born in Kuwait, lived in the Hixson area of Chattanooga and had gone to high school in nearby Red Bank, where he was a member of the wrestling team, before earning an engineering degree from the University of Tennessee at Chattanooga.

A high school friend described Abdulazeez as a sociable, smart and deeply religious student with a sharp sense of humor.

“He was very sociable. He had a really easy-to-get-along-with personality,” said Terry Jones, a 25-year-old engineer from Knoxville. “He was kind of the funny guy in … class.”

Abdulazeez's former high school wrestling coach called him a good student who had many friends.

“Mohammod was very humble. He always did what I asked him to do, he never gave me any problems," said Kevin Emily, who now works as a teacher and coach in Waterloo, Iowa. “All the guys seemed to like him. He was not an outsider.”

When Emily began receiving phone calls and text messages from former team parents and wrestlers Thursday, he said he couldn’t believe it.

“I just sat there in my car, just stunned,” he said. “There was nothing out of the ordinary. He came from a good family. I don’t understand what went wrong with him.”

Chattanooga's Muslim community was shocked too.

"This has just completely blindsided us," Azhar S. Sheikh, a physician, said late Thursday after FBI officials held a meeting at the Islamic Center of Greater Chattanooga, where he is a board member. "Our thoughts and prayers are with the families of the victims. We share their sorrow."

Although Abdulazeez grew up in the community, he had had been living in Nashville in recent years, Sheikh said. Only in the last few months had he returned to live with his parents. "He kept to himself. But that's how he'd been since I'd known him. Our acquaintance was fleeting. We are very shocked."

The center practices "a comprehensive, balanced view of Islam," according to its website. "We strive to embody the 'middle path' to which our scriptures call us, a path of moderation, free of extremism, and representative of the Islamic vision of a healthy community."

Sheikh said the center monitored potential radicalization of its members, but it had not been an issue. "We as a community, if we suspect anything like this, we approach the authorities," he said. "We offered the FBI our unconditional support. We're all struggling to connect the dots."

The attack began at a recruiting center on Old Lee Highway in Chattanooga where five branches of the military have adjoining offices in a strip mall, which includes a cellphone store and an Italian restaurant. There was no extra security, but there seldom is at such recruiting facilities, which are easily accessible to the public, U.S. defense officials say.

Sometime between 10:30 and 10:45 a.m. the gunman drove up in a gray Ford Mustang, according to a federal law enforcement official who asked not to be identified. He was armed with multiple weapons and opened fire with a long gun, unleashing a barrage of more than two dozen rounds, the official said.

No one was reported hit in the volley at the first site, officials said. Schools and businesses, including a nearby mall, immediately locked down as a security measure.

Nic Donohue, 24, said he heard a blast of gunshots while working at Desktop Solutions, about three storefronts from the recruiting center. But he had music playing, and wasn’t quite sure what the noise had been. He turned off the music, and seconds later a second blast thundered.

“In the back of your head you really don’t want to believe that it is gunfire and something dangerous is going on,” he said.

Bruce Gans, owner of Tri-State Pools, which is down the street from the recruiting offices, said that when he heard the gunshots, his first instinct was to grab his weapon.

“I have an ex-policeman here and he had a weapon, and we just got our guns and put them in our pocket. You know, I don’t think we would’ve been much a match for this guy,” he said. “We knew it was not a pistol.”

Police from several agencies responded to reports of the shots. The gunman fled by car and police gave chase to the Navy and Marine Corps Reserve Center on Amnicola Highway, less than half an hour away.

There, the Ford convertible, with the top down, arrived and the gunman jumped out and “almost instantly” started firing, according to a federal source.

The four Marines were killed at the second center, federal officials said.

The victims’ names will be released upon notification of the next of kin, the Marines said.

Another Marine recruiter was wounded in the leg and was treated and released. Another man who was injured was described by hospital officials as being in critical condition. Neither he nor the police officer, who was wounded in the ankle, were named.

President Obama led the nation in grieving over the latest incident of gun violence, which occurred on the same day that jurors in Colorado convicted James E. Holmes of murder in the July 2012 attack on a crowded movie theater that left 12 people dead and 70 others wounded. The president promised a thorough investigation.

“It is a heartbreaking circumstance for these individuals who have served our country with great valor to be killed in this fashion,” Obama said.

“We take all shootings very seriously. Obviously, when you have an attack on a U.S. military facility, then we have to make sure that we have all the information necessary to make an assessment in terms of how this attack took place, and what further precautions we can take in the future. And as we have more information, we’ll let the public know,” he said.

U.S. Atty. Bill Killian said the attacks were being investigated as an “act of domestic terrorism.” A federal source said the FBI had not established any foreign terrorism nexus in the shooting but had not ruled it out.

Atty. Gen. Loretta Lynch said she had directed the FBI to take the lead in a national security investigation of “this heinous attack on members of our military.”

She added, “In the days ahead, we intend to work with our partners in law enforcement and the intelligence community to ensure that the American people are protected and that justice is served.”

Counter-terrorism authorities had warned of the possibility of terrorist attacks coinciding with Ramadan. The Institute for the Study of War, a Washington think tank, warned before the start of the holy month that Islamic State was “likely preparing a surge of operations to try to achieve important campaign objectives” during Ramadan.

The Council on American-Islamic Relations, or CAIR, the nation’s largest Muslim civil rights and advocacy organization, denounced the attack.

“We condemn this horrific attack in the strongest terms possible,” CAIR Executive Director Nihad Awad said. “Such inexcusable acts of violence must be repudiated by Americans of all faiths and backgrounds. The American Muslim community stands shoulder to shoulder with our fellow citizens in offering condolences to the loved ones of those killed and injured and in rejecting anyone who would harm our nation’s safety and security. Our thoughts and prayers are with the families impacted by this tragedy.”

University of Tennessee officials said Abdulazeez, whose name on their records was listed as Muhammad Youssef Abdulazeez, graduated in 2012 with an electrical engineering degree.

Jones, the high school friend, said that he and Abdulazeez shared a favorite band — System of a Down — and an interest in media and filmmaking, and took art classes together.

“I just remember every art assignment he would put a … humorous spin on it,” Jones said.

Abdulazeez excelled in science and math, Jones recalled. He was also deeply religious, observing prayers five times a day and fasting during Ramadan. Jones said he never knew him to drink, smoke or do drugs.

Jones also played on the school’s tennis team with Abdulazeez’s younger sister, and remembers the siblings’ mother regularly attended their matches. “She was just like any other mom. She was super nice, super caring,” he said. Abdulazeez’s father often traveled for work, Jones said.

In the upper-middle-class neighborhood of Hixson where Abdulazeez lived, people looked on as police searched the gunman’s house and filled the streets.

“I’m shocked. He didn’t seem like a disgruntled kid. I didn’t find anything wrong with him. He intermingled with the neighborhood kids, talking and playing ball. We never had any problems,” said Dean McDaniel, 59, who lived two doors down from Abdulazeez for more than 15 years. Abdulazeez’s sisters babysat his children when they were younger.

“He was a good kid. The family didn’t bring too much attention to themselves,” he said.

“Doggone, you wouldn’t think that anything like this would happen in Chattanooga,” said Keith Daw, a dentist who lives nearby. “The biggest crime we have here is someone not cutting the grass enough.”