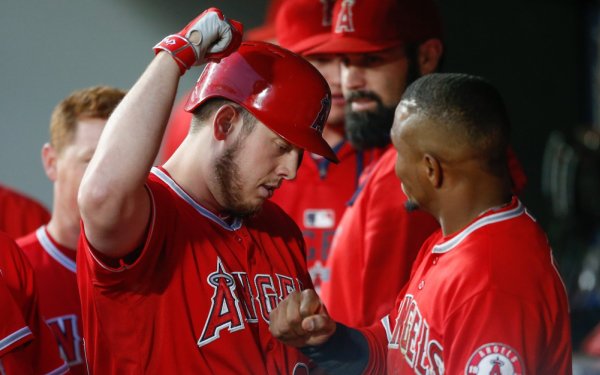 The Josh Hamilton saga began in late February and dragged on for two months, the Angels expressing "serious concerns" about the outfielder's "health, conduct and behavior" after his substance-abuse relapse and swallowing $60 million of his contract to trade him to the Texas Rangers on April 27.

Then, on July 1, General Manager Jerry Dipoto abruptly resigned in the wake of renewed friction with Manager Mike Scioscia.

In between, an underachieving offense — outside of Mike Trout and Albert Pujols, that is — struggled so much to score that the Angels, despite strong pitching, were stuck at .500, the very definition of mediocrity, 18 times through June 26 and were five games behind the Houston Astros in the American League West on July 1.

Now look at them: Winners of seven of nine games, the bats busting out for 65 runs and 107 hits — 37 for extra bases — on a recent nine-game trip. The Angels have a record of 48-40 and have a half-game lead over the Astros as they open second-half play against the Boston Red Sox on Friday night.

"Those were two things that could have definitely derailed some teams," reliever Joe Smith said of the Hamilton and Dipoto situations, "but fortunately, we didn't let either one become a distraction.

"There is adversity every year, and it comes in different forms. Both scenarios were sad, but there's nothing we can do about it as players except to go out and play the game."

The drawn-out Hamilton affair and sudden loss of their general manager, combined with the struggles of half their lineup, cast a cloud of negativity over the Angels for much of the first half.

The Angels weren't expected to match their 98-64 record of 2014, but no one expected them to be 11-15, seven games back and already looking to the trade market to bolster the offense in early May. If there was a sense of panic, it stopped at the clubhouse door.

"It's a long, long season, so just because April and May didn't go our way, you've got four months left to play good baseball," right fielder Kole Calhoun said. "And to be honest, you want to be playing your best baseball as you get further into the season.

"There were times we struggled to score runs, but we still had confidence in ourselves. That's what we told you guys every day, that we believed in each other and in this team, and now we're here playing well and in first place at the break, just like we talked about."

One hot streak can't mask the team's deficiencies, though.

Interim General Manager Bill Stoneman's top priority before the July 31 trade deadline is to acquire a better-hitting outfielder, preferably one that bats left-handed, but improvement also needs to come from within.

"If we get Joyce and Iannetta swinging like they can and Freese back on track, that need for a bat starts to dissipate," Scioscia said. "Bill is making contact with teams, putting together a list of guys who might help us, and we'll see where it goes."

Dipoto was also looking for a leadoff man, but the emergence of second baseman Johnny Giavotella, who is hitting .291 with a .328 on-base percentage, six runs and six RBIs in 13 games since taking over the top spot on June 28, could mitigate that need.

"He's growing into the role of table-setter," Scioscia said. "He gives you a good at-bat, and he's really been clutch for us. When you look at everything, he's definitely the best guy we have to set the table for Kole, Mike and Albert."

Another problem looms, but it's a good problem to have. Jered Weaver threw a three-inning, 50-pitch simulated game Thursday and will repeat the workout Monday or Tuesday before returning from a left-hip injury, most likely July 25 or 26.

C.J. Wilson, Garrett Richards and Hector Santiago will start the first three games coming out of the break, with Andrew Heaney and Matt Shoemaker pitching Monday and Tuesday.

At some point next week, the Angels must decide who comes out of the rotation when Weaver returns, but having six capable starters for five spots beats having three for five spots, like the Angels did last September after Richards and Shoemaker were injured.

With closer Huston Street expected back from a right-groin injury Saturday, and Trout and Pujols, who have combined for 52 homers and 111 RBIs, showing few signs of cooling, the Angels are in decent shape entering the second half.

"There are a lot of professional people in here who have been through a lot, who know what it takes, and who know not to get too low or to press and be upset if we're behind," Iannetta said.

"I think we believed and knew the whole time that we were a good team. Guys are starting to play more like themselves, and as a result, we've scored a lot of runs lately. We'll see how it all plays out."