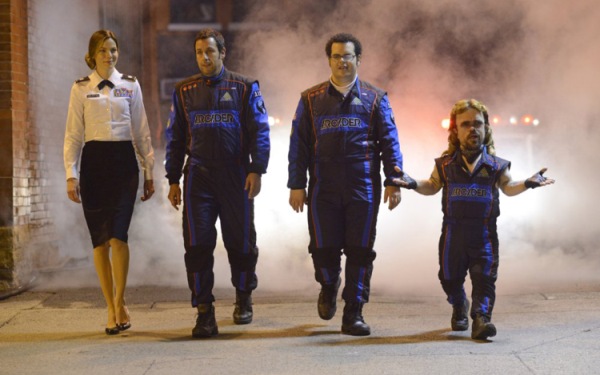 Back when the great Video Game Crash of the mid-’80s was sending Pac-Man and his cronies into a commercial tailspin, Chris Columbus was writing “Gremlins,” about horrible little monsters that mess with technology.

Coincidence? Yes, but not much of one. Columbus’ filmmaking career may have coincided with the fall and rise of what is now considered primitive gaming technology, but his directorial gifts have been behind some of the more beloved movies of the past three decades — “Home Alone,” “The Goonies,” the first two “Harry Potter” films, “Mrs. Doubtfire.” Over the past few years, his efforts have been more about producing than directing (including Oscar favorite “The Help” and the “Night at the Museum” series); he and his daughter Eleanor’s company, Maiden Voyage, has been helping first-time directors get their movies made (“Little Accidents,” “Mediterranea,” “The Witch”).

But the redemptive plotline of “Pixels” — coproduced by his 1492 Pictures, Columbia Pictures and Adam Sandler’s Happy Madison Productions — offered multiple attractions for the 56-year-old director.

“The thing I fell in love with,” Columbus said, “was the concept of these kids” — played by Sandler, Stony Brook’s Kevin James, Peter Dinklage and Josh Gad — “who in 1982 were champions of world video games and walked away thinking they were rock stars. They thought they were going to play video-arcade games for the rest of their lives. And we all know what happened with that — it all fell apart with the advent of home video. And these guys had no skill set. So I was fascinated with what happens to them when they grow up. There’s no place for them in society. They’re kind of lost.”

It touched him, he said. “Not only did I love that concept, but also the idea that these guys who were sort of lost come together to save the planet — because they’re the only people who know how to fight these video game characters.”

SENDING UP A TIME CAPSULE

As per the screenplay by Timothy Dowling and Tim Herlihy, NASA in 1982 sent up a time capsule, including glimpses of American life and culture — especially video games, which are interpreted by aliens as a declaration of war. The aliens respond in kind — attacking humankind with replicas of Pac-Man, Arkanoid, Tetris, Donkey Kong, Centipede and Space Invaders. James’ character, who has become president of the United States (this is a fantasy, after all), calls his old buddies back to fight the foes.

Of course, any movie starring Sandler and James automatically gets pegged as an Adam Sandler-Kevin James Movie.

“Which is perfectly understandable,” said Columbus. “But I said to Adam, ‘Look, look, you are a great actor. I saw “Punch-Drunk Love”; I saw “Funny People”; I saw “Reign Over Me.” You have some solid acting chops, so let’s use them in this movie. And let’s play against type. Let’s cast Kevin as the president of the United States’ — which is not a particularly comedic role. You have to believe him in this movie; he’s the president. ‘And as opposed to surrounding you with comedians, let’s surround you with great actors, like Peter Dinklage and Josh Gad and Michelle Monaghan.’ And everybody rose to the occasion. I think it’ll be totally unexpected for a lot of people, because it’s not what you’ve been seeing from these guys for the last 10 years.”

Contrary to what might be popular opinion, Sandler, according to Columbus, is really tough on himself.

“I said, ‘You’re a really good actor.’ He said, ‘Nah, I’m not.’ He’s hard on himself. But in this movie he’s really good. He’s a really, really smart guy, so I’m sure he knows that those performances in those movies were great and he turned out to be a really great collaborator, especially in the postproduction process, because I expected him to be a little precious in terms of some of the comedy. Maybe we didn’t agree on something, or didn’t feel, tonally, like it belonged in this movie. He would say, ‘Whattya think, Columbus?’ And I said, ‘If it doesn’t work, let’s cut it.’ So the movie became very streamlined. It’s the best version of what it could be.”

As self-critical as Sandler might be, Columbus seems to have been equally unsure of himself over the years, despite having made some insanely popular movies, films that people love.

“I wasn’t really aware of that for 30 years,” he admits. “Some of the movies weren’t reviewed very well. They might have been very successful at the box office, but I take reviews personally: I read everything. So it took me 30 years to get out of that mindset that ‘the movies are OK, but ... ‘ It took 30 years of people saying, ‘You know what “Goonies” meant to me? You know what “Home Alone” meant to me?’”

He said he thought “Pixels” might be a way of getting back to the feeling of those early films produced by Amblin — the company co-founded by Steven Spielberg, for whom Columbus wrote “Gremlins,” and “The Goonies” and “Young Sherlock Holmes” back in the day.

“I thought this was a way of re-creating what I was doing in the ’80s in terms of being a writer,” he said, “because there was a certain feeling to those Amblin films I can’t define or articulate. There was something about sitting in a movie theater in the mid-’80s, a certain feeling of escape, that as a kid you always felt you were seeing something you weren’t supposed to be seeing. So I thought this one was a way of getting back to that. There’s a direct connection to this movie.”

Of course, “Pixels” will also be state-of-the-art popcorn cinema, despite its seminostalgic subtext and Columbus’ leeriness about overindulging in computer graphics.

“I think Spielberg did it best in ‘Jurassic Park,”” he said, pointing to that film’s conscientious lack of visual manipulation, and reliance on animatronics rather than digital effects. “‘Jurassic Park’ has a total of 95 or 100 visual-effects shots,” Columbus said. “Our movie has like 1,200.”

The high-tech digital tool kit available to today’s film directors can be a “Pandora’s box,” says veteran director Chris Columbus. “Sometimes, you have this completely CGI world and the audience knows it. I can’t put my finger on how or why they know it, but they just know it.” The key to keeping movies grounded and human, he said, is restraint. “It’s like having a really great steak, and not eating six of them.” The “Pixels” director is not unfamiliar with, or unfriendly toward, visual effects. But his most famous films as a director are known for an emotional, rather than a computerized, virtuosity:

ADVENTURES IN BABYSITTING (1987) The title sounds a little lame now — it sounded a little lame then — but anyone who gave Columbus’ directorial debut a shot was in for a delightfully surprising series of hair-raising mishaps and an expedition into late-‘80s urban paranoia, as Elisabeth Shue sets out and tries to rescue her runaway friend from a downtown Chicago bus station with three kids in tow.

HOME ALONE (1990) Macaulay Culkin was visited upon an unsuspecting world via a potentially nightmarish scenario — a 10-year-old marooned at home for the holidays, while his over-large family heads off to Paris. But Culkin’s Kevin McCallister certainly made the best of things, ordering pizza, making a mess and thwarting two dastardly house burglars (Joe Pesci, Daniel Stern) who’d hoped to make a Christmastime killing. (Columbus also directed the 1992 sequel.)

MRS. DOUBTFIRE (1993) Robin Williams in drag was an acquired taste, but this adaptation of the Anne Fine novel (“Alias Madame Doubtfire”) — in which a divorcing dad is hired as the nanny to his own children — remains one of the late comedian’s more beloved pictures.

HARRY POTTER AND THE SORCERER’S STONE (2001) Columbus beat out such directors as Mike Newell, Terry Gilliam and Alan Parker (as well as, reportedly, his onetime mentor Steven Spielberg) to direct the J.K. Rowling blockbuster, which despite being an alleged children’s novel became one of Columbus’ darker films, full of moody, gothic lighting, scary creatures and a perpetually imperiled hero. Columbus also directed the second installment, “Harry Potter and the Chamber of Secrets” (2002), and produced part III, the Alfonso Cuaron-directed “Harry Potter and the Prisoner of Azkaban” (2004).

PERCY JACKSON & THE OLYMPIANS: THE LIGHTNING THIEF (2010) Another adaptation of a best-selling YA series, “Percy” was Columbus’ last directing job before “Pixels,” and starred Logan Lerman as the dyslexic son of Poseidon. Columbus got off the Jackson juggernaut before part II, which was released in 2013.