Is ‘Sharknado 3’ bad enough to be good fun? 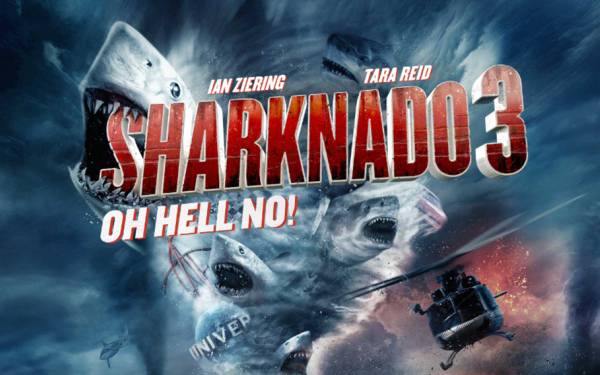 The review copy of “Sharknado 3: Oh Hell No!” came with a note asking that reviews not reveal lots of elements, including “any character deaths.”

That now-completed series was famous for keeping plot developments secret, insisting that the audience approach its many twists and turns without spoilers. It was also one of the best TV series ever.

No one will make any such claim for “Sharknado 3,” which premieres at 9 p.m. Wednesday on Syfy. The latest installment in a set of movies about sharks falling from tornadoes onto defenseless citizens is a different kind of viewing experience, one where plausibility and acting matter not a bit. The pleasure is in the ineptness.

The original “Sharknado” somehow broke out of a pack of cheesy Syfy movies to become a pop-culture phenomenon, especially for a scene where star Ian Ziering chainsawed his way out of a shark. The social-media delight in such an effort led to “Sharknado 2,” and now a third film.

In its insistence on being the biggest yet — more peril! more celebrity cameos! — “Sharknado 3” is pretty much the “Jurassic World” of sharknado movies. Only, box-office returns notwithstanding, “Jurassic World” is a disappointment, big and loud but ultimately empty in terms of plot and character. (Watching it, I felt as if Chris Pratt were playing exactly the kind of guy that he makes fun of in “Guardians of the Galaxy.”)

“Sharknado 3” marks a similar decline in its screen cycle as it pits Ziering and his co-stars against not one sharknado attack but a host of them, including in Washington, D.C. (where Mark Cuban and Ann Coulter are president and vice president), and Orlando, Fla., where the action offers plenty of scenes in the Universal Orlando theme park.

The laughs are more scattershot, the tackiness more forced. The seemingly endless promotional footage of the theme park — a corporate sibling of Syfy — goes squarely against what these movies are meant to be: jaunty little outsiders, not a money-grabbing corner of an entertainment empire.

In short, it’s not easy to make a good bad movie.

And it’s really hard to do it on purpose.

The best bad movies are the ones that didn’t know they were bad, at least at first. They turned rotten because the people making them had no idea of good or bad (think of cult favorites “The Room” and “Plan 9 From Outer Space”). Or the project was a demented dream of a star (John Travolta in “Battlefield Earth”). But it’s for the most part crucial to our enjoyment that the filmmakers were certain they had something of quality — or at least as close to that as their limited budgets and imaginations would allow.

And enjoy such films we often do, frequently in groups at theaters, in dormitory common rooms or online. We laugh together at cheesy effects, cheer for terrible lines, mimic ghastly performances. We look at actors we’ve admired in other productions and wonder what made them think this film was a good idea.

We ask how soon a writer or director faced a balloon payment that led to the tripe we’re tweeting madly about with our far-flung friends. Or we simply remember seeing the movie when we were very young, and of unformed taste, and thought the movie was really cool — until we saw it through more discerning eyes.

Bad movies have been celebrated, more or less, for decades. The entire “Mystery Science Theater 3000” series was built around bad movies. Books include “The Golden Turkey Awards,” “Bad Movies We Love” and “Showgirls, Teen Wolves, and Astro Zombies: A Film Critic’s Year-Long Quest to Find the Worst Movie Ever Made.”

The author of that last title, film critic Michael Adams, says in a YouTube interview that the book was inspired by seeing “Material Girls,” a terrible film starring Hilary and Haylie Duff. Hearing that some considered it the worst movie ever made — it’s currently at 4 percent on Rotten Tomatoes — he went in search of something worse. And found plenty.

But there’s a difference between being terrible and being unwatchable. Adams, for one, on several occasions offered lists of movies that were at once awful and unmissable.

But now we’re edging up to two problems in making bad movies. The first is that demonstrated by “Sharknado 3,” where the lack of quality has become self-conscious, where there’s a wink behind the worst scenes to say the shortcomings are intentional. (Well, most of the time, anyway. Tara Reid is probably giving the best performance she can, poor thing, and Bo Derek — as Reid’s mother — is no better.) Then we lose the sense of discovering something inadvertently terrible; we’re just being handed a pile of crap with a big label saying “crap.”

The other problem is that sometimes we just love a movie no matter what a lot of smarty-pants may think. Ishtar has shown up on some so-bad-it’s-good lists, sure. But the first half-hour or so is genuinely, on-purpose funny. “Showgirls,” likely seen by more people anticipating a disaster than those expecting a good movie, nevertheless has one critic calling it “one of the only ’90s films that treats pop culture as a vibrant field of social economics and cerebral pursuit.”

Then there’s “Road House.” I cannot let this Patrick Swayze action-drama go undefended. I have had frequent debates with one of my editors about it. I love it, especially the first half. She is uncomprehending.

Adams, as noted, has also listed “Road House” as a terrible movie. Yet he has caveats. As he said on Rotten Tomatoes, “After ‘Point Break,’ this is the late Patrick Swayze’s best movie, even though it’s not, at least by the usual standards, a ‘good’ film. Who in their right mind could possibly believe a story about a world-famous bouncer who’s also a pacifist philosopher? Who cares! Swayze as high-kicking, throat-tearing Dalton is cheer-along fantastic. He’s given awesome support from Sam Elliott and Ben Gazzara.”