LA's run of black artist shows is promising, but where are the women? Steven Nelson wants to know 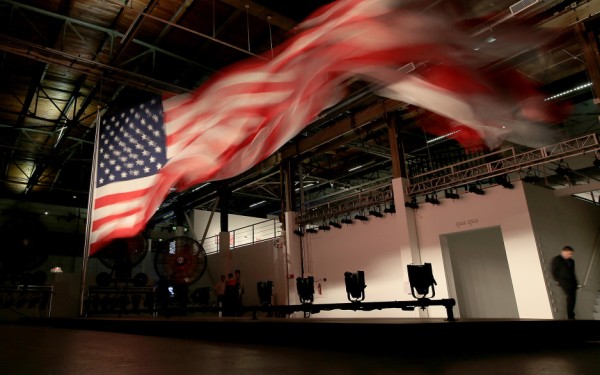 The year has seen a number of solo exhibitions by African American artists at major museums in Los Angeles. Charles Gaines had a show of his grid pieces at the Hammer Museum in February. This was followed, in March, by a pair of intriguing installations at two different locations of the Museum of Contemporary Art: William Pope.L's massive flag at the Geffen Contemporary, as well as Kahlil Joseph's ruminative film, inspired by Compton and the music of Kendrick Lamar, at the museum's Grand Avenue building. In June, Noah Purifoy's assemblages went on view at the L.A. County Museum of Art, followed by the opening of an exhibition of new works by Mark Bradford back at the Hammer.

At a moment when questions of race, equity and representation are paramount, this streak marks an interesting moment for Los Angeles — one that has allowed for the city to take in a broad range of works by black artists: from the intricate assemblages of Purifoy (who passed away in 2004 at the age of 86) to the video work of Joseph, who is just 33, and whose art is inspired by everything from Russian avant-garde cinema to African American films of the 1970s.

Which makes it a perfect time to take a step back to discuss how the representation of black artists may or may not be changing at the city's major museums.

Steven Nelson is a professor of African and African American Art History at UCLA. He also directs the university's African Studies Center. He spoke with me about what this spate of exhibitions may reveal — but also what's missing. Namely, the women.

Gaines, Pope.L, Joseph, Bradford, Purifoy. It's been a big year for black artists at the big museums in Los Angeles. Is there precedent for this? Are African American artists finally starting to get some parity on the exhibition roster?

There have been, off and on, shows that highlight groups of black artists and individual artists for a long time. LACMA, for example, did a show back in the 1970s: "Two Centuries of Black American Art." That show really set the stage for what was already an active community of African American artists here in Los Angeles.

But what I do think is different about these shows is their scale. Back then you simply didn’t have LACMA creating a major show around a single black artist. It’s really in the past decade that you see these larger shows. Many of the artists being shown, however, are already famous. So, in some ways, there is less risk for the institutions.

What I'd say that we’re seeing a loosening up. Is it a revolution? No. Is it interesting? Yes.

What does give me pause is the lack of women. Why the Carrie Mae Weems show [originally exhibited at the Guggenheim] hasn’t been picked up is beyond me.

In other words, there is still work to do.

I do think this is interesting in positive ways. It’s great to see black artists have major shows at major institutions. But it's also worth noting that the Hammer didn’t curate Gaines — that came from the Studio Museum in Harlem. The Hammer had a Kara Walker show in 2008, and they didn’t curate it. That show came from the Walker [Art Center in Minneapolis].

There are issues of diversity at the institutions themselves. The only place with a diverse curatorial staff is LACMA. LACMA is the only institution that has taken it seriously. And with those changes you see different types of shows coming forth. To have Purifoy at LACMA is wonderful. It’s their show — they curated it — and it doesn’t surprise me given the make-up of their curatorial team [which includes African American curator Franklin Sirmans].

The places that get left out of the picture are smaller museums like the Fowler here at UCLA. In Los Angeles, you have to look beyond the Big Three [the Hammer, LACMA and MOCA]. Black artists have always shown in this city — just not always at the Big Three.

Historically, the [New] Wight Gallery at UCLA or the [Fisher Museum of Art at] USC, they were showing artists of color back in the 1960s and they were being covered in the press. The thing is that those waves don’t necessarily make their way into the mainstream. So the question is the mainstreaming — there is a kind of mainstreaming going on, but it tends to be the boys.

The unheralded player in all of this is the Santa Monica Museum of Art [which recently lost its space at Bergamot Station]. They brought in Barkley Hendricks from [the Nasher Museum at] Duke [in 2009]. They brought Fred Wilson [in 2003]. They’ve brought shows from the Studio Museum in Harlem. They were the ones who did "Freestyle" [a highly influential show of black artists working in the post civil rights era].

Santa Monica showed that. Curatorially, they were the ones who took chances in Los Angeles. They definitely need a home.

These shows come at a time when the position of black men in American society is being hotly debated. I know it would be wrong to assume that black artists are, because of their race, making work that comments on their identity or what's happening with African Americans generally. But I will nonetheless ask the question: What ideas have you seen in any of these shows that you think have spoken particularly well to the moment we are living?

What I won't do is read the tea leaves and try to speak for an artist’s intention. But I do think Bradford’s work has always spoken to those kinds of issues. They've always been about social inequity and racial inequity and stereotypes of black men. Where Mark is sly is that you find what he’s dealing with not only in the work, but in the titles. If you want to know what's on Mark’s mind, look at the titles. He's been calling his work things like "Scorched Earth," or he'll borrow from Nina Simone and call a piece "Mississippi Goddamn."

I think that Mark’s work is a real incredible series of observations on space and inequity — on how that space is doled out unequally across economic status, across race, across gender, across sexuality. His work is abstract but it's a sort of aerial view of social relations. So in terms of art shows in our present moment, his work is in part about black men being under scrutiny.

But black men are always under scrutiny. It’s just more obvious this year.

Of the exhibitions you’ve had an opportunity to see, which have you found particularly compelling?

I saw Purifoy [at LACMA] on Saturday and I loved it. It's installed beautifully.

I would have liked to have seen him contextualized a bit more with the other artists he worked with. You see that in the beginning, but not so much later with the desert pieces.

But it was fascinating to see his development as an artist in that exhibit. Most people who know him at all only know the big desert pieces, so to contextualize his whole career was really fascinating, to show that he was working with Plexiglas and paint and a lot of specific cultural references, that is really important.

Which brings us to the women — let's talk about the women.

If we go back to the Pacific Standard Time exhibitions, what was so great about Now Dig This!, [curator] Kellie Jones's show [at the Hammer], is that you not only saw really interesting and really important representations of black art, but it also included women.

So which African American women artists do you think are sorely in need of a solo museum show?

I'd start with Betye Saar. Why isn't there the big Betye Saar show? She has been working here for half a century. Also, where’s the big show on Adrian Piper? Carrie Mae Weems is the only example we can think of who has recently had a major museum show in the U.S. and you ask yourself, why didn’t that show come to Los Angeles? There can be any number of reasons for that.

The fact is that there have been a lot of black women who have been very active here. Lorraine O’Grady was at [UC] Irvine for a number of years. Pat Ward Williams was at Irvine too. Where is that work? Where are they, where are the women? You can’t use the excuse that they’re not there.

I think all of the shows we've seen here in L.A. mean that someone is paying attention somewhere. But we can't think about racial diversity without thinking about gender.

Ultimately, we don't yet know that the world has changed. We might have a bigger chair at the table, but has the table itself changed? That's not something we can be sure of just yet.

Find me on Twitter @cmonstah. You can find Steven Nelson @snelsonus.