A LEGO Brickumentary: the amazing legacy of the world's favorite toy 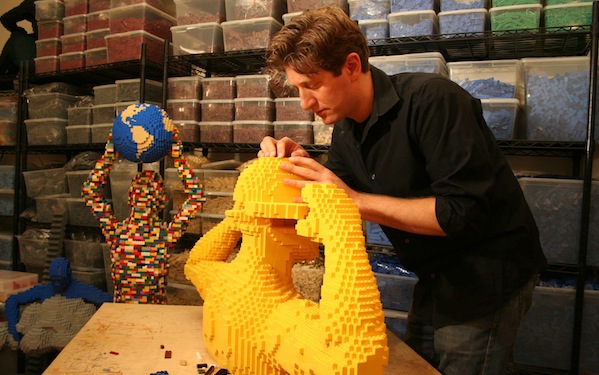 Last year, with the crazy awesomeness that was The LEGO Movie, all of us who had long ago put our bins of the tiny little building blocks in our dusty attics were once again reminded of the glory of the colorful structures that filled our childhood. At a certain point, at a certain age, the building seemed useless, as all the hard work was inevitably going to be knocked down, whether by you or your bully of an older sibling. But there are two documentarians here to remind us just how foolish we are to think the beloved little toy called LEGO is trivial, because with the their documentary A LEGO Brickumentary, they are about to astonishingly prove that LEGO’s are, in fact, necessary.

Daniel Junge, who won an Oscar for his 2012 short Saving Face, and Kief Davidson, who got an Oscar nom for his short Open Heart in 2013, are at the helm of this sheepishly fun doc, and are now turning to less somber subject matter, but with equal amount of spirit in the Brickumentary.

Just when you thought that LEGO’s had a pretty singular use—that is, stacking one on top of the other in hopes of matching the box just so—Junge and Davidson explore the lesser known underground worlds that LEGO has inspired. With the delightful guidance of a LEGO-fied Jason Bateman (Arrested Development) as our narrator, we are given a special glance into how these plastic boxes have been integrated in some of the most unexpected and truly exceptional ways.

The magic of the Brickumentary is its unearthing of the magic of the LEGO, because really, even if you think your versed in all the ways and mechanisms in which you can use a LEGO to build or do something, you’re still far from understanding its reach. Because it’s a far reach. A really far reach.

From the massive conventions held around the world, to fighting political injustices, to the classroom where kids with autism find a new source of confidence, the Brickumentary widens not only our grasp of its influence, but also our appreciation of its immense impact on countless people’s lives. For example, I bet you didn’t know that if it weren’t for LEGOs, the TV cult hit "South Park" probably wouldn’t exist, because it provided creator Trey Parker with an outlet of escape when stress became wholly unmanageable.

As you can see, this isn’t just a movie for your kids—although they will find plenty to guffaw and drool over (like seeing the biggest LEGO structure ever built—I won’t tell you of what though). If the Brickumentary teaches you anything, it’s that being a kid with a LEGO in your hand is just the beginning. We are introduced to the concept of AFOLs (Adult Fans of LEGOs) and KFOLs (Kid Fans of LEGOs) who come together to share their passion on the same platform, the same level, to be regarded with the same assurance of creativity and gumption.

Appropriately so, the Brickumentary doesn’t try to be too profound, nor does it belittle itself. By showing us a variety of niches in which the toy has taken root in the rightly playful way, Junge and Davidson give credence to the idea that we all never truly grow up. They show that we can still embrace our childlike spirit, a spirit that can spur our innermost creative beasts to build something unforgettable, something meaningful.

So, before you go throwing your old set away, just think about the possibilities that lay before you. If you need inspiration, then look no further than A LEGO Brickumentary. You may—no—you will be surprised.

Coming soon to a theater near you.

Enter to win a RADiUS Blu-ray pack, a movie poster and a gift certificate to ToyZoo.
Enter the Sweepstakes