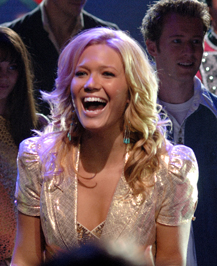 Let's straighten a few things out, right up front, Mandy Moore – no relation – says. She did not, as was reported many places, kick her parents out of her house in L.A.“My parents were very upset,” she says with an exasperated laugh. “I am very close with my family, and when I bought my house in L.A. three years ago, I wanted them to come live with me. But as I got close to 21, I realized I needed my space. So my parents just moved back to Orlando. Nobody was thrown out of anywhere!”

She's not mad. She has learned, after a few years in the public eye, to “ignore all these rumors.” Very adult of her. The pop singer-turned-actress celebrated her 22nd birthday April 10.

So yes, she's still very much involved with “Scrubs” star Zach Braff. But don't believe every rumor you read about them registering for an upcoming wedding.

For now, she co-stars, with Hugh Grant, in American Dreamz . She plays a “Next Pop Idol” show contestant who is willing to do pretty much anything to win on the nation's most-watched TV program, and Grant is the mean Brit who hosts it.

The Paul About a Boy Weitz film won't be Moore's best-reviewed film. But her notices are better than the movie's. Variety's Robert Koehler panned the movie, but says “Moore's is a pitch-perfect study of a woman for whom a reality show is reality.”

We caught up with the Cosmopolitan cover girl in Los Angeles.

OK, which “American Idol” contestant's traits did you think it would be fun to slip into the character, to make fun of?Big fan of the show. But I just trusted Paul [Weitz], whom I just love as a filmmaker, to show me where to go. The character is a bit like Hilary Faye, from Saved , just a juicy part. Kind of playing against type, I hope.

You get to sing in the movie. But what songs! How do you keep a straight face singing “Mommy Don't Drink Me to Bed Tonight?”I had the hardest time not cracking up. But Paul was in the studio with me, which was different, directing my singing.But [the character of] Sally Kendoo is headstrong and willing to do most anything to win this thing. I think she has it all figured out, and singing a song, any song, is just dead serious to her.

Do you understand that craving for fame?

I have boundaries that I would never cross to get ahead in this business. And I don't think Sally understands that. There's nothing she wouldn't manipulate to get her way ...I understand, I guess to a degree, being that passionate. But not to that extent.

The president that this movie mocks pretty openly wasn't the object of fun that he is today when you started this movie. That must have seemed pretty gutsy when you guys started filming.

All of us read the script and thought, ‘This is pretty timely.' But we had no idea just how timely it would seem, with approval ratings and the political landscape changing as they do.

I guess it's gutsy, but the main idea was to make something that will get people talking. It's smart, and a movie with something to say. I hope it finds an audience.

If I am reading imdb.com right, you have, what, like a dozen projects in the works?

Seems like! I have an album due out this fall. I have three films that are finished that are coming out ( Southland Tales , Because I Said So , Dedication ) this year.

I start License to Wed , with Robin Williams, next month. We had our first read-through the other day, and he had all of us on the floor, in stitches. I expect to be entertained each day, and I just hope to be professional enough not to crack up every time I do a take with him!

American Dreamz is currently in theaters.